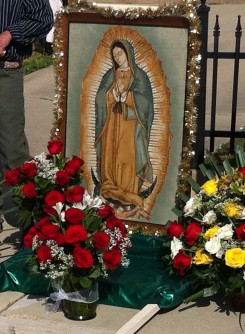 A depiction of the Virgin of Guadalupe outside the Forest Courthouse in Scott County, Mississippi, ready to be carried in the foot procession in 2012.

Newswise — TUSCALOOSA, Ala. — Mexican immigrants living in a rural Mississippi county and who are highly devoted to the Virgin of Guadalupe coped better with immigration-related stress than those less devoted to the religious, Mexican symbol, according to a study by anthropologists at The University of Alabama.

Through interviews conducted in 2013, Dr. Mary Rebecca Read-Wahidi, then a doctoral student, and her adviser, Dr. Jason A. DeCaro, identified the ranges of personal and communal practices that signify devotion to the Virgin of Guadalupe for Mexican immigrants in Scott County, which has one of the largest Hispanic populations in Mississippi.

The researchers found multiple ways to devotion, but, whatever the pathway, the health of the devoted are not as affected by stress as their less-devoted peers in the community, according to the study published in the journal Medical Anthropology Quarterly.

“It has provided a kind of buffer of the stresses impacting their health,” said DeCaro, UA associate professor of anthropology. “It does not mean they are unaware of the stress and everything is roses, but they are able to let it roll off their back, more or less.”

The Virgin of Guadalupe is believed to be an appearance of the Virgin Mary, the mother of Jesus in Christian tradition, to the native peasant Juan Diego in 1531 near present-day Mexico City.

Recognized as a miracle by the Roman Catholic Church and Diego since canonized, the Virgin of Guadalupe remains a central figure in the religious, national and cultural traditions of Mexico.

“The point is made even more clear through our study when we see how devotion to the Virgin of Guadalupe retains many of the same themes as in Mexico, but also accommodates the specific hopes and fears that come with being an immigrant in rural Mississippi,” said Read-Wahidi, now a postdoctoral research fellow at the Mississippi State University Social Science Research Center.

Read-Wahidi spent time in the community learning what devotion to the Virgin of Guadalupe meant for the immigrants, developing a questionnaire. The goal was not to come into the community with rigid assumptions about devotion, but understand that devotion can be more than church attendance or daily prayers, DeCaro said.

The same people who took the survey to gauge devotion to the Virgin of Guadalupe also answered questions on immigration-related stress and their health.

Immigration-related stress can include fear of police harassment, deportation, lack of health insurance, job loss, finances and worries about family back home, according to the study.

Overall, those who reported feeling a lot of stress related to immigration rated themselves in poor health except those who also rated themselves as highly devoted to cultural, personal and religious practices of the Virgin of Guadalupe.

“Our results show how people who fit the model of what it means to be a Guadalupan devotee in Scott County, Mississippi, don’t have that expected decrease in well-being when faced with some pretty intense daily stressors,” Read-Wahidi  said.