Diamonds From the Deep: Study Suggests Water May Exist in Earth’s Lower Mantle 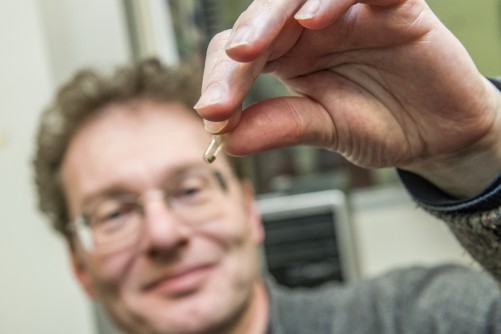 Oliver Tschauner, professor of research in the Department of Geoscience at the University of Nevada, Las Vegas, holds a diamond sample during a recent round of experiments at Berkeley Lab’s Advanced Light Source. 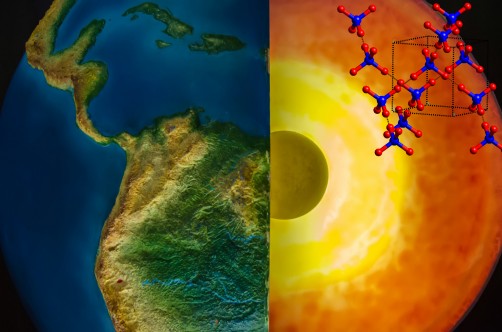 The molecular structure of ice-VII (upper right) is shown with an artistic rendering of the Earth and a cutaway view of the inner Earth (right). Crystallized water, in the form of ice-VII, was found in diamond samples studied at Berkeley Lab. Its presence suggests liquid water may exist at extreme depths.

Newswise — Water on Earth runs deep – very deep. The oceans have been measured to a maximum depth of 7 miles, though water is known to exist well below the oceans. Just how deep this hidden water reaches, and how much of it exists, are the subjects of ongoing research.

Now a new study suggests that water may be more common than expected at extreme depths approaching 400 miles and possibly beyond – within Earth’s lower mantle. The study, which appeared March 8 in the journal Science, explored microscopic pockets of a trapped form of crystallized water molecules in a sampling of diamonds from around the world.

The tiny traces of crystallized water, trapped in spaces called inclusions that measure just a few microns (millionths of a meter) in length, contain the molecular signature of ice VII. This crystallized water likely formed from liquid water existing at very high pressures, according to the study.

Oliver Tschauner, the study’s lead author and a professor of research in the Department of Geoscience at the University of Nevada, Las Vegas, said it was surprising that so many of the studied diamonds from a random sampling seemed to originate from deep inside the Earth, within and even beyond the so-called transition zone sandwiched between Earth’s upper and lower mantles.

While only about 60 diamonds had previously been confirmed to originate at depths greater than about 190 miles, the latest study added several more to this tally.

“It seems many diamonds come from greater depths,” Tschauner said. “In the past, people had focused more on larger inclusions,” tens of times the size of the ones that were the focus of the latest study. “Some of these small inclusions may have been overlooked before,” he added.

Researchers concluded that some of the inclusions likely were formed from fluid existing at depths of 250 miles to 340 miles beneath Earth’s surface. Others may have formed at depths ranging from 380 miles to 500 miles – possibly within Earth’s “shallow” lower mantle.

“It’s not just a curiosity to have a diamond residing deep in Earth’s mantle – this is direct evidence for aqueous fluid in the deep Earth,” Tschauner said.

The pressures that formed these deeper diamonds are estimated at approximately 24 to 25 gigapascals, which is about 224 times more pressure than exists at the bottom the ocean’s deepest point in its Mariana Trench.

The composition of the fluid that was trapped in the inclusions appears to be complex, with traces of carbonates, oxides, and salt, Tschauner said.

The research team enlisted infrared spectroscopy at the ALS’s Beamline 1.4, which helped them to observe the chemistry of the tiny inclusions.

Hans Bechtel, a research scientist in the Scientific Support Group at the ALS, explained that the infrared technique measures vibrational signatures that detail chemistry at the microscopic level. “With synchrotron light, we can focus down to 2 to 10 microns in the infrared,” he said, “and scan across each sample to create a ‘hyperspectral image’ that reveals the detailed chemical composition.”

It’s not yet possible to estimate how much watery fluid exists in Earth’s transition zone and how it’s distributed, Tschauner said, but more diamond studies should help with the estimates.

Such studies can also help scientists learn about how much water “recycling” goes on in the mantle, and the process by which ocean water reaches into the mantle, for example.

This new thrust of research provides a unique opportunity to “see” inside the inner Earth, Tschauner noted. “It probably will open new avenues in studies.”

The ALS and Advanced Photon Source are DOE Office of Science User Facilities.

Researchers from the University of Chicago, California Institute of Technology, China University of Geosciences, University of Hawaii at Manoa, and Royal Ontario Museum also participated in the study. The work was supported by the U.S. Department of Energy Office of Basic Energy Sciences and the National Science Foundation. 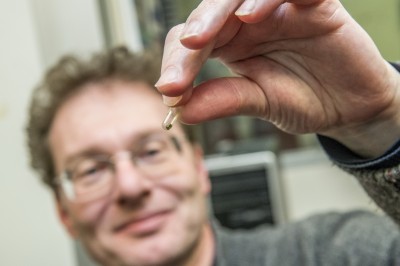 Caption: Oliver Tschauner, professor of research in the Department of Geoscience at the University of Nevada, Las Vegas, holds a diamond sample during a recent round of experiments at Berkeley Lab’s Advanced Light Source. 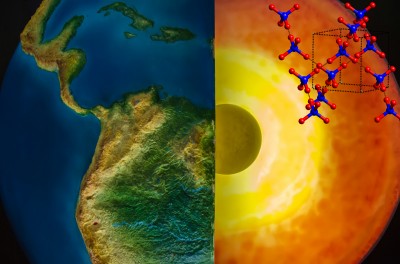 Caption: The molecular structure of ice-VII (upper right) is shown with an artistic rendering of the Earth and a cutaway view of the inner Earth (right). Crystallized water, in the form of ice-VII, was found in diamond samples studied at Berkeley Lab. Its presence suggests liquid water may exist at extreme depths.