Did Robin Williams Have Dementia? 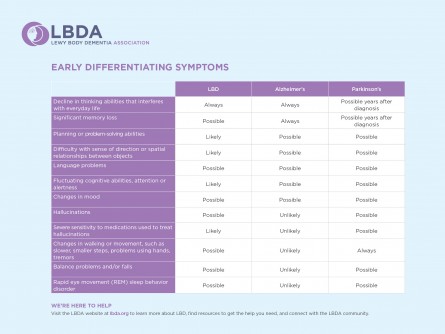 The Lewy Body Dementia Association (LBDA) provides information about what can – and cannot – be concluded from these reports.

“The use of the term dementia in the neuropathology report should not be inferred to mean that dementia was observed during life,” warns Dennis Dickson, M.D., Mayo Clinic in Jacksonville, Fla. and member of the LBDA Scientific Advisory Council.

Lewy bodies are misfolded protein deposits found in the brains of individuals with several different disorders including Parkinson’s disease (PD) and dementia with Lewy bodies (DLB).

Dr. Dickson, who has reviewed the autopsy and coroner’s report, further states, “Mr. Williams was given a clinical diagnosis of PD and treated for motor symptoms. The report confirms he experienced depression, anxiety and paranoia, which may occur in either Parkinson's disease or dementia with Lewy bodies.”

Is it Dementia with Lewy Bodies or Parkinson’s Disease?

To receive a diagnosis of dementia with Lewy bodies, a person must have significant problems with thinking and memory that interfere with everyday life. There is no mention in the media or in the autopsy report that Robin Williams exhibited these symptoms.

“Further research is needed to better understand why some individuals with diffuse Lewy body disease do not show symptoms of dementia,” according to Dr. Dickson. “In particular, we need to learn how dementia with Lewy bodies differs clinically from Parkinson’s disease when they both share the same underlying disease process.”

DLB and PD share many symptoms, but have different patterns of onset, progression and symptom severity. The most prominent and problematic clinical symptoms in early PD are related to movement, while in DLB they are more likely to be cognitive and psychiatric. However, over the course of both disorders, the symptoms become more and more alike. (See LBDA’s comparison chart for details.)

About Lewy Body Dementia AssociationThe Lewy Body Dementia Association (LBDA) is a 501(c)(3) nonprofit organization dedicated to raising awareness of Lewy body dementias (LBD), promoting scientific advances, and supporting people with LBD, their families and caregivers. LBD, a complex disease that can present with a range of physical, cognitive, and behavioral symptoms, is a “family disease.” It dramatically affects not only the person diagnosed but also the primary caregiver. A national health organization, LBDA supports all those affected by Lewy body dementias through outreach, education and research. To learn more about LBD and LBDA, please visit lbda.org.