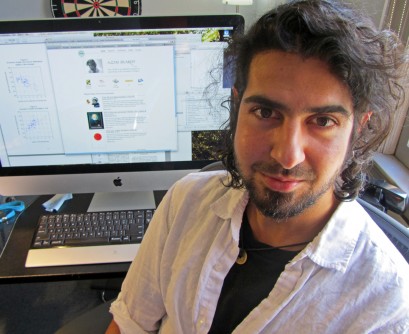 Azim F. Shariff, professor of psychology at the University of Oregon, studies the impacts of religion on moral behavior.

The findings emerged from two experiments involving a mathematics test in which honesty was put to the test. Students were told about a software glitch in which the correct answer to each problem would appear after several seconds. To avoid seeing the answer, they were told to press the space bar immediately after viewing each problem and before pursuing a solution without scratch paper or calculators.

The results are detailed in the quarterly International Journal for the Psychology of Religion. The research is part of a larger effort to understand cultural development, in particular the role of religion in encouraging -- or even forcing adherence to -- moral behavior.

"Taken together, our findings demonstrate, at least in some preliminary way, that religious beliefs do have an effect on moral behavior, but what matters more than whether you believe in a god is what kind of god you believe in," Shariff said. "There is a relationship: Believing in a mean god, a punishing one, does contribute to cheating behavior. Believing in a loving, forgiving god seems to have an opposite effect."

In the first experiment, 61 undergraduates took a simple "but tedious" math test. Afterward, they were questioned about their religiosity, views of God and demographics. Their views of God, which involved 14 traits, were analyzed and divided to identify the participants' perceptions of their God's being loving, caring and forgiving or harsh, punitive, vengeful and punishing. Their cheating -- whether they used the space bar to avoid getting the correct answer -- was measured.

No differences in cheating were found between self-described believers in God and non-believers. However, students who specifically perceived God as punitive, angry and vengeful showed significantly lower levels of cheating.

The second study was designed to remove other potential variables such as personality and general religious affiliation. The 39 undergraduate participants were surveyed several days before the cheating task about their views of God in a series of randomly asked questions that touched on a number of different topics. The subjects later took the same math test.

Again, students who believed in a loving God were the most likely to cheat. Again, self-described believers were no more or less likely to cheat than non-believers. In both scenarios, the "punitive God" and "loving God" significantly predicted cheating in opposite directions.

Data emerging from social psychology literature tends to find that, as a general disposition, what people believe every day doesn't really affect moral outcomes, Shariff said. Though some recent research on religion's role, which involved unconsciously activating religious beliefs at a given moment, finds that being in a religious situation matters, little evidence shows that the religious disposition contributes to moral behavior

"According to the psychological literature, people who believe in God don't appear to act any more morally than people who don't believe in God," he said. "We wanted to look deeper at particular beliefs. One idea is the supernatural punishment hypothesis: Punishing counter-normative behavior -- immoral behavior -- has been an important part of living in societies. Societies don't get far without regulating moral behavior."

Even though the trend found in the new study was significant, Shariff cautioned, the results are preliminary. Specifically, the research focused on academic cheating, which is only one type of moral behavior. It is unclear whether the pattern of results will generalize to encouraging positive behaviors, such as generosity. Researchers should examine other impacts of how views of God may influence other types of both negative and positive moral behaviors.

In the journal Science in 2008, Shariff and Norenzayan reviewed 30 years of social science research and argued that there is a nuanced, but very important relationship between religion and moral behavior. Before their review of the literature was done, Norenzayan said in 2008, the public debate on whether religion fosters cooperation and trust had been driven by opinion and anecdote. The current studies add to the recent efforts to inject scientific evidence into the debate.

International Journal for the Psychology of Religion (Volume 21, Issue 2)