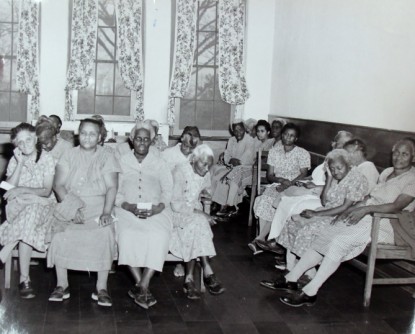 Courtesy of the Institute for Urban Policy Research & Analysis

Newswise — AUSTIN, Texas – A century’s worth of historical records from Central State Hospital in Virginia – the world’s first black mental hospital – will soon be available online in a digital archive created by King Davis, director of the Institute for Urban Policy Research & Analysis, and an interdisciplinary team of researchers from The University of Texas at Austin.

Established in 1868, Central State Hospital, formerly Central State Lunatic Asylum for Colored Insane, was created in response to the newly freed slaves after the Civil War. The mounds of forgotten materials offer a rare glimpse into what life was like for African Americans following the Civil War to the post-civil rights era. Without Davis’ intervention, the documents would have been shredded due to confusion over Virginia’s records retention laws.

Since Central State Hospital was the world’s first African American psychiatric hospital until it integrated in 1968, the digital library will be a genealogy gem for people in need of answers about their mental health history. Not only will people learn more about their family tree, they will also discover their risks for developing mental illness, says Davis, who is a professor of African and African American Studies. He anticipates completion of the digital library by fall 2014.

With help from the UT Austin School of Information, nearly 1 million pieces of deteriorating materials (photographs, patient record books, doctor’s journals, to name a few) have been digitized and are currently stored on a hard drive. With additional funding, the researchers will be able to complete the last – and most challenging – leg of the project: creating an online digital library while protecting private information of the patients.

To help with this process, Unmil Karadkar, an assistant professor in the School of Information, is developing new technology that crowd-sources the digitized handwritten text while protecting private information, such as names, addresses and social security numbers, from the human transcribers. The new Steganoscription software detects key words within the lines in the handwritten documents that are recognized as private information, allowing transcribers to quickly and effectively convert thousands of handwritten documents into a searchable database.

Karadkar anticipates the software to be functional by spring 2014. In addition to streamlining the digital archive project, the new technology will be a valuable tool for other archival projects, as well as current medical transcription work.

Once the digital library is available online, Davis says the information could potentially lead to new discoveries about the history of mental illness in African Americans, an area of research that has been vastly understudied, he notes.

“Current studies do not include mortality data on African Americans with serious mental illness,” Davis says. “Research based on the archival data will yield information that can be useful to change the outcomes of future stories that had their origins in the 19th century.”