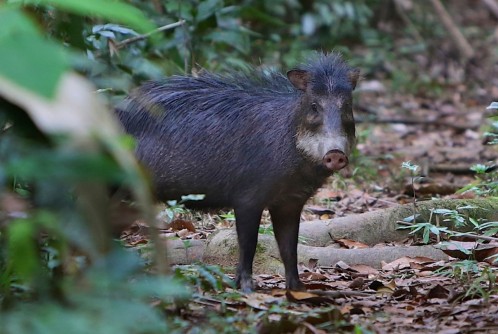 A white-lipped peccary in the Amazon rainforest near the study area. This is one of the most hunted species in the study.

Newswise — Evidence of wildlife passage, such as tracks, scat, fur, and disturbed surroundings, is a more accurate tool for assessing wildlife conservation status than actual encounters with animals, according to an international team of scientists from six universities, including Virginia Tech, publishing Wednesday (April 13) in PLOS ONE.

"Being too conservative, such as prohibiting hunting of a game species because there are few sightings, can be unnecessarily hard on communities that depend upon game for livelihoods and food security," said Kirsten Silvius, a senior research associate in the College of Natural Resources and Environment at Virginia Tech, and a member of the team that spent three years in the Amazon comparing sign-based and encounter-based methods to estimate hunted wildlife populations.

A member of the Department of Forest Resources and Environmental Conservation, Silvius' expertise is in strategic planning for protected area-based sustainable economic activities.

As a member of the research team lead by Stanford University senior scientist Jose M.V. Fragoso, Silvius' interest was to enable wildlife and resource management by indigenous peoples and participatory resource monitoring and management.

From May 2007 to June 2010, the team surveyed 27 sites in an area of southern Guyana roughly the size of Costa Rica that encompasses forests and savannahs across a range of elevations.

Several hundred hunted and un-hunted species were detected using both methods, but the researchers focused their analysis on the most frequently hunted species. Of 32 species analyzed, 31 were detected by both methods, but the most important game animals, such as tapirs and the hog-like peccary, were significantly under-detected by the encounter method, likely as a result of behavior changes in response to being hunted. Sign based methods proved more reliable.

"These animals are important to food security and still hunted successfully," said Silvius. "Because the encounter-based method is considered the gold-standard for density estimations, the absence of sightings of tapirs near two villages would have resulted in a conclusion of tapir extinction; and yet, sign evidence was plentiful and kill rates were no different from those at villages where tapirs were visible."

Sustainable logging in a multiple-use protected area could have also been curtailed based on the low visual encounters of tapirs, resulting in unnecessary restrictions on sustainable forestry activities.

Surveys based on sign are an efficient tool because data can be continually collected and provide information on changes of numbers and location over time and in response to management strategies, the researchers report in the journal.

Silvius emphasizes that sign data can be locally collected and interpreted as the basis for rapid, community-based decision making and management. "Local trackers, whether they be from indigenous groups or other traditional populations, are effective environmental monitors."

Silvius, Luzar, and Fragoso were also part of a research team that worked for three years in the same area gathering data on livelihoods and forest dynamics, which they linked to the above animal population data to analyze the factors that can derail sustainability of indigenous lands and other protected areas. With information such as land conversion, use of external food sources and other dietary changes, and reductions in child mortality, they demonstrated the value of simulation models in revealing the linkages between humans and their environment. Led by Takuya Iwamura of Tel Aviv University and with Eric Lambin of Stanford, that research was published in the March 1 issue of the Ecological Society of America journal, Frontiers in Ecology and the Environment.