Direct Link Between Glands and Implanting Embryos Critical to Pregnancy 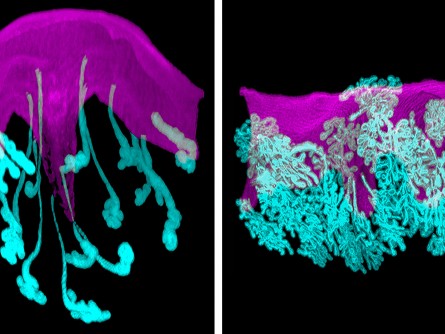 The confocal microscopic image of a mouse uterus on the left shows normal formation of embryo implantation crypts, with healthy uterine glands extending from the uterine wall of a mouse that expresses a gene and its protein (Vangl2) critical to this process. In the image at right, the uterus of a mouse lacking the gene and protein demonstrates abnormal crypt formation, with withered glands obstructing what otherwise would be implantation crypts. Scientists from Cincinnati Children’s report their research results Feb. 9 in Nature Communications.

Investigators in the Division of Reproductive Sciences at Cincinnati Children’s report their data Feb. 9 in Nature Communications. They demonstrate in mice that glands in the uterus must link and communicate directly with the embryo so it will implant and begin pregnancy.

“We show that glands nourish the embryos within the crypt by forging a direct connection between the two entities,” says the study’s senior investigator, Sudhansu K. Dey, PhD, the director of Reproductive Sciences. “The gland secretions produce molecules essential to embryo development. Without Vangl2, the glands do not extend and connect to the embryo, and the embryo does not properly implant.”

The Vangl2 gene is critical to glands extending to the embryo, according to the research team, which included co-first authors Jia Yuan, PhD, and Wenbo Deng, PhD, both members of Dey’s laboratory.

The researchers are looking for answers to pregnancy problems to help address high rates of preterm birth and infant mortality, which remain persistent health challenges in modern society. This study is just one puzzle piece in an expanding body of research trying to unravel the genetic, molecular and lifestyle causes, according to Dey.

In their study, researchers produced unprecedented visual and molecular detail about the early stages of a normal mouse pregnancy. They then compared normal mouse pregnancy to malformations that occur in the uterus when the gene Vangl2 is deleted from epithelial cells in the lining of uterine cells and glands. Highly conserved and present across species, the Vangl2 gene produces a protein called Van Gogh-Like Protein 2. The protein helps control collective cell movement and spatial arrangement in developing tissues.

In the normal mouse pregnancy, researchers show that glands providing vital molecular support from the mother to developing embryo extend from the uterine lining and connect directly to the embryo. This connection occurs inside implantation chambers in the uterus called crypts. The study reveals that glands remain connected to embryos through pregnancy’s early stages. Dey said this is to ensure a competent embryo properly implants in crypts—a critical step to beginning a healthy pregnancy.

After disrupting embryo implantation and pregnancy in the mice, the scientists wanted to uncover the molecular mechanism makes glands extend to the embryo and promote implantation. They learned that a growth factor protein called HB-EGF (heparin-binding EGF like growth factor) coordinates with Vangl2 to initiate this process.

HB-EGF is normally expressed in the embryo and crypt. To simulate what occurs in pregnancy, the researchers transferred embryo-sized beads soaked with HB-EGF into the mice uteri. Even in the absence of implanting embryos, the HB-EGF-carrying beads displayed implantation-like responses and showed gland-crypt interaction.

Earlier studies by Dey and colleagues found that HB-EGF is one of the earliest molecular markers for embryo-uterine interaction in implantation. He said the current study adds important new insight to the field of reproductive science by showing what takes place when HB-EGF is expressed by a competent early embryo. HB-EGF expression induces genetic activity in the crypt epithelium that collaborates with Vangl2 to direct communication between glands and the implanting embryo.

Researchers then tested what happened when they administered HB-EGF to mice with deleted Vangl2. Genetic deletion caused mice uterine glands to form improperly and wither the implantation chamber. Although the glands connected to the blastocyst, it was insufficient to support implantation. But when researchers administered HB-EGF to the mice, it rescued pregnancy by restoring the crypt and molecular links between the uterine glands and embryo.

Still unclear at this point is how the current study’s findings apply to human pregnancy, according to Dey and his colleagues. The study opens doors to future research possibilities in other animal models that more closely approximate human pregnancy.

Dey said ethical concerns limit future investigations of these findings during human pregnancy. But he noted that advanced imaging technologies today, including some forms of magnetic resonance imaging, might allow observation of human pregnancy displaying uterus-gland interaction in normal and abnormal pregnancy.

He also said further research is warranted into the potential of HB-EGF as a therapy for problems in pregnancy. But he emphasized the current study’s findings only allow conclusions about mouse pregnancy.