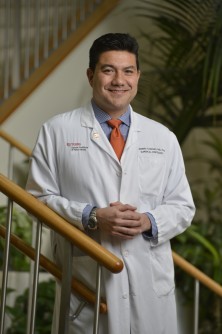 Newswise — New Brunswick, N.J., March 21, 2017 – Building on their previous research focusing on vaccination within a tumor (intratumoral) for the most common form of pancreatic cancer, investigators from Rutgers Cancer Institute of New Jersey and Rutgers Robert Wood Johnson Medical School have shown that in a mouse model of early stage resected pancreatic cancer, intratumoral vaccination induces an anti-tumor response that results in a significant improvement in overall survival. Results of the work were presented as part of a poster presentation at the 70th Annual Society of Surgical Oncology Cancer Symposium held this past week in Seattle.

The group’s previous work focused on the investigational vaccine known as PANVAC. PANVAC contains gene additives that might stimulate a person’s immune system to recognize and develop an immune response to the disease. In a phase I clinical trial, patients with pancreatic ductal adenocarcinoma were treated with PANVAC through direct tumor injection via endoscopic ultrasound, which was followed with a PANVAC booster. The booster vaccine given in the arm is designed to circulate throughout the body (systemic). In the phase I trial, the median overall survival of the patients who received PANVAC was not significantly greater than that of patients with the same stage of disease treated with standard therapy. Eight patients who did not have disease that spread beyond the pancreas (metastatic) when they began the trial ended up succumbing to the disease following progression of the primary tumor in the pancreas, which is unusual, say investigators. Because of that response, the researchers hypothesized that perhaps the vaccine can induce an immune response that protects against the development of metastatic disease, but cannot make an already formed tumor go away. They aimed to further explore whether intratumoral vaccination would have a better chance at improving survival if it were applied to patients with early stage disease who could undergo removal of their pancreatic tumor following vaccination.

In order to test this theory in a human clinical trial, researchers first needed to see if they could produce this result in an animal model. This type of research is considered “pre-clinical” or “translational” research. Since no mouse models of early stage resectable pancreatic cancer exist, the laboratory of Darren Carpizo, MD, PhD, surgical oncologist at Rutgers Cancer Institute and senior investigator of the work had to first develop one. The Carpizo laboratory then collaborated with the laboratory of Rutgers Cancer Institute researcher and Associate Director for Education and Training Edmund C. Lattime, PhD, to conduct the vaccination experiments.

An antigen expressing vaccine was administered directly to the pancreas in mouse models, as well as the booster at regular intervals on days four and 18. This was followed by resection of the primary pancreatic tumor on day 28. The investigators found that the tumors of the vaccine treated mice were smaller in size as compared to controls, and they also displayed significant increases in immune populations that are associated with anti-tumor immunity. They also found that the vaccinated mice exhibited marked prolonged survival as compared to the controls suggesting that the vaccine allowed their immune system to protect them from acquiring metastatic disease and dying.

“These findings will provide the necessary pre-clinical data to test a vaccine like PANVAC in humans with resectable pancreatic cancer. Such a human trial has never been done before,” shares Dr. Carpizo, who is also the director of the Hepatobiliary Oncology Program at Rutgers Cancer Institute and an associate professor of surgery and pharmacology at Rutgers Robert Wood Johnson Medical School.

This work was supported by a Rutgers Cancer Institute of New Jersey Gastrointestinal Oncology Pilot Grant to Drs. Carpizo and Lattime.