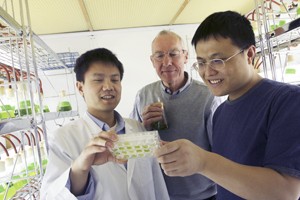 Dr. William Snell (center), professor of cell biology, led the local research of an organism that led to key insights into the basic mechanisms of reproduction. Drs. Yanjie Liu (left) and Jue Ning, both postdoctoral researchers, also were involved in the international investigation, which may also point to a possible way to thwart the spread of malaria.

Newswise — International investigations of an organism that one UT Southwestern Medical Center researcher calls a "silly little green scum" have led to key insights into the basic mechanisms of reproduction.

The findings may help explain why species can almost never interbreed, and also point to a possible way to thwart the spread of malaria, a disease that kills about 1 million people each year, primarily children in sub-Saharan Africa.

In a study appearing online today and to be published in the April 14 issue of the journal Genes and Development researchers from UT Southwestern have found that sexual reproduction begins with a two genetically different steps: First, two reproductive cells must first latch onto each other with one protein, and secondly, they must fuse their membranes to form a single cell using a different protein.

The UT Southwestern scientists collaborated with malaria experts at Imperial College London and found that the parasite causing the disease also uses this two-step process. When they blocked "male" and "female" malarial cells from fusing, spread of the mosquito-borne disease was stopped.

Their work started with a single-celled green alga nicknamed Chlamy (pronounced "clammy" ), short for Chlamydomonas. This harmless organism, widely found in soil and water, is easy to grow and study under laboratory conditions.

"A silly little green scum has led us to an exciting new vaccine target for malaria," said Dr. William Snell, professor of cell biology at UT Southwestern and co-senior author of the study.

Understanding fertilization in microorganisms may lead to a new type of vaccine, called an "altruistic vaccine," Dr. Snell said. There is no vaccine to prevent malaria, but in the future, vaccinating an infected person to prevent the parasitic cells from completing the fusion step might stop the disease from passing to others.

Although the study involved only single-celled organisms, Dr. Snell said that the use of two different proteins in the two-step fertilization process may be the case in all species. The gene controlling whether egg and sperm can bind would be unique to each species, while the gene for the second step " fusing into a single cell " could be more universal. For example, the researchers found that HAP2, the gene that controlled whether cells fused, is also present in agriculturally important crops such as corn and wheat.

For the parasite that causes malaria, fusion is controlled by a gene not found in mammals, so blocking this step might prove effective in stanching the spread of the disease without harming humans, Dr. Snell said.

The UT Southwestern researchers initially were interested in general methods of reproduction, which are often studied in Chlamy. This single-celled organism can reproduce sexually, not with egg and sperm, but rather with some cells roughly corresponding to "male" and others to "female."

After realizing that Plasmodium species, including the one that causes malaria in humans, also use "male" and "female" cells to reproduce, Dr. Snell contacted malaria researchers at Imperial College London to test whether HAP2 might be involved in reproduction in that organism and in the spread of malaria.

The British researchers found that blocking HAP2 in Plasmodium cells stops the fusing step. When mutant Plasmodium organisms lacking HAP2 were injected into mice, mosquitoes that bit the mice did not become infected with Plasmodium and therefore could not spread the infection to other mice. This indicates that without HAP2, Plasmodium could not reproduce in a mosquito's gut, a vital step in the cycle of infection.

In addition to its applicability in fighting disease, the latest study confirms a theory about why different species can't interbreed, Dr. Snell said. There are rare exceptions in closely related species such as horses and donkeys, which can interbreed to create mules, or lions and tigers that can mix to form ligers, but such hybrids are sterile.

If the first step in reproduction, binding of egg and sperm, is controlled by a single gene per species, then the binding step would serve as a gatekeeper to prevent incompatible cells from getting close, Dr. Snell said. Evolutionarily, this scheme makes sense, he said, because it would take only a mutation in the single gene that controls egg-sperm binding to create a new species.

"There has been a lot of speculation about species-specific egg-sperm binding and fusion and whether the two steps involve the same or different proteins, but no one had the molecules to show this," Dr. Snell said. "We now have those molecules to show that a new species wouldn't have to reinvent the wheel to control fusion."

Researchers from Imperial College London, University of Nottingham, The Wellcome Trust Sanger Institute and the University of California, Irvine, also participated in the study.

The work was supported by the National Institutes of Health, the London-based Medical Research Council, the Wellcome Trust, the Lister Institute of Preventive Medicine, the Swedish Research Council, and the Biology and Pathology of Malaria Parasite Network of Excellence of the European Commission.