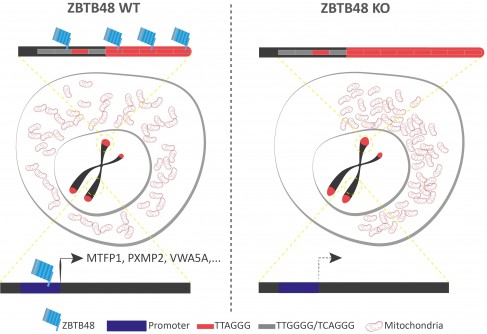 ZBTB48 is both a telomere-binding protein limiting telomere length and a transcriptional activator. ZBTB48 binds through the last of its 11 zinc fingers directly to telomeric DNA (TTAGGG, in red) as well as subtelomeric variant repeats (TTGGG/TCAGGG, grey), which represent the protective caps at the end of chromosomes. In addition, it binds to the promoter sequences (dark blue) of specific target genes including mitochondrial fission process 1, MTFP1. In the absence of ZBTB48 (right panel) telomeres become longer whereas the expression of ZBTB48 target genes is strongly reduced. For instance, ZBTB48 KO (knock-out) cells loose the expression of MTFP1 leading to defects in the mitochondrial network with mitochondria clustering around the nucleus instead of being widely spread throughout the cell.

Newswise — A team of researchers led by Dr Dennis Kappei, a Special Fellow from the Cancer Science Institute of Singapore (CSI Singapore) at the National University of Singapore (NUS), has discovered the role of the protein ZBTB48 in regulating both telomeres and mitochondria, which are key players involved in cellular ageing. The results of the study will contribute to a better understanding of the human ageing process as well as cancer development.

The study, which was conducted in collaboration with researchers at the TU Dresden and the Institute of Molecular Biology Mainz, both in Germany, were published in the journal EMBO Reports in May 2017.

In vertebrates, telomeres act as protective caps located at the ends of chromosomes. Telomeres shorten every time a cell divides, and ultimately the loss of telomeres leads to cellular senescence, where cells cease to divide, and eventually, cell death. Cancer cells are known to bypass this limit by activating mechanisms that keep their telomeres long, thereby allowing for their unlimited proliferative potential. Previous studies have linked telomeres to the function of mitochondria (essential cell organelles that act as cellular power plants) and vice versa.

ZBTB48 has recently been found to directly bind to telomeres that are abnormally long, and to limit them from growing further. It is only the fourth protein that is known to bind to telomeres. The first two proteins, TRF1 and TRF2, had been discovered about two decades ago, while previous research work by Dr Kappei had discovered the third, HOT1, only in 2013.

In this study, the research team found that ZBTB48 not only prevents further telomere lengthening in cells that already have abnormally long telomeres, but more generally in cancer cells regardless of their telomere length. In addition, the team also uncovered that ZBTB48 can activate the production of a specific set of genes, which include a mitochondrial gene called MFTP1.

“The findings from our study validated recent findings on the telomere binding role of ZBTB48. Our team’s independent discovery of the ZBTB48 protein is an extension to these recent findings, as we found evidence indicating that cancer cells, in general, are regulated by ZBTB48. It potentially also suggests applications for the human ageing process even at old age when telomere length has already decreased,” said Dr Grishma Rane, Research Fellow at CSI Singapore and co-first author of the study.

Moving forward, the team is looking deeper into the role of the ZBTB48 protein in both cancer development and ageing. Dr Kappei said, “We are now actively pursuing the exact molecular mechanism through which ZBTB48 controls telomere length, and further looking into ZBTB48’s role in various cancers, such as neuroblastoma, in which the gene is frequently deleted. With the discovery of ZBTB48’s novel linkage between telomeres and mitochondria, which both have key roles in cellular ageing, we will also be studying whether this interplay contributes to telomere maintenance.”