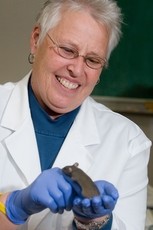 NAU's Loretta Mayer is working on research to speed up fertility in rats to decrease the number of rodents munching on crops intended for humans.

Newswise — When scientist Loretta Mayer set out to alleviate diseases associated with menopause, she didn't realize her work could lead to addressing world hunger and feeding hundreds of millions of people.

The Northern Arizona University researcher and her colleagues at NAU and the University of Arizona identified a nontoxic chemical technology that when applied to rodents, caused infertility in rats, which feast on crops intended for human consumption.

"This environmentally neutral approach, that has never been available before, will reduce the damage rice-field rats cause in countries that depend on rice as a main food supply," Mayer said.

Rodents consume or damage up to 50 percent of pre-harvest rice crops. Due to the large-scale cultivation of rice worldwide, if rice production were to increase by 10 percent, "this would feed about 380 million people a year," Mayer said. "We can easily increase rice production by 10 percent by reducing rodent fertility in half."

She said this noninvasive approach is more humane than poison, which takes several days to kill rodents and seeps into groundwater, harming other animals and possible food sources.

The sterilization technology derived from Mayer's research, done by Patricia Hoyer and and Glenn Sipes at UofA, investigated potential damage caused to ovarian follicles in women exposed to certain chemicals in industrial settings. Of particular interest was a chemical compound known as 4-vinylcyclohexene diepoxide, or VCD, typically used in manufacturing rubber tires, polyesters and plastics.

She found that low, nontoxic doses of VCD in mice sped the menopausal process and rendered them infertile. She dubbed this new animal model of accelerated menopause "mouseopause."

Mayer and her colleagues have developed a product called ContraPest that incorporates the chemical sterilization treatment into bait. The bait is put into strategically placed stations that lure rodents into cages too small to attract or affect other animals. "No rat or mice I know can resist a little hole," she said.

ContraPest is being tested in Indonesia -- the largest producer of rice in the world, and is currently being registered for rodent-population control in Australia.

Scientists adapt the product to different rodent species at SenesTech, the Flagstaff-based company that grew out of Mayer's work on the NAU campus. Named after the word senescence, meaning approaching an advanced age, the young company hopes to create a number of beneficial products.

"What we are doing right now is we are preparing the translation of this technology to dogs and cats. We have already completed six months of study in dogs. This could have a tremendous impact on reducing the number of animals in shelters," said Mayer noting that not only is the method a cost-effective way to avoid surgical spaying, there's a global impact to canine management most people don't realize.

"Dogs are huge vectors of disease throughout the world," she said. "In India, every two seconds someone is bitten by a dog. The tragedy is that every 30 minutes someone dies from rabies. If you continue to vaccinate against rabies, you won't be able to make a dent. You have to combine rabies vaccinations with fertility control."

She hopes to address rabies problems on the rise in West Africa, India and China.

Australia hopes to put the technology to use in managing its kangaroo, wallaby and camel populations. New Zealand, Spain and the United Kingdom also are in line to put ChemSpay to use.

She said luring students to the research team was easy. "We want them involved with hands-on research and field experience," she said. "The first question I ask interested students is if they have empty passport pages they are ready to fill."