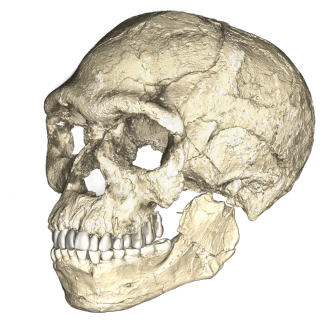 An international research team has uncovered 300,000 year-old fossil bones of Homo sapiens, a find that represents the oldest reliably dated fossil evidence of our species. Above is a composite reconstruction of the earliest known Homo sapiens fossils from Jebel Irhoud (Morocco) based on micro computed tomographic scans of multiple original fossils.

Newswise — An international research team has uncovered 300,000 year-old fossil bones of Homo sapiens, a find that represents the oldest reliably dated fossil evidence of our species.

The unearthing, reported in two papers in the journal Nature, significantly pushes back the origins of our species: the find is approximately 100,000 older than any other previously discovered Homo sapiens fossils.

The discovery, which also included stone tools and animal bones, was made at Jebel Irhoud, Morocco—the site of multiple hominid fossil discoveries dating back to the early 1990s. The work also included an analysis of the tooth size and morphology of the new and previously discovered fossils—an effort conducted by New York University Anthropology Professor Shara Bailey.

The team, led by Professor Jean-Jacques Hublin of the Max Planck Institute for Evolutionary Anthropology in Leipzig, Germany and Abdelouahed Ben-Ncer of the National Institute for Archaeology and Heritage in Rabat, Morocco, notes that the fossils reveal a complex evolutionary history of mankind that likely involved the entire African continent.

“We used to think that there was a cradle of mankind 200,000 years ago in east Africa, but our new data reveal that Homo sapiens spread across the entire African continent around 300,000 years ago,” observes Hublin, a palaeoanthropologist. “Long before the out-of-Africa dispersal of Homo sapiens, there was dispersal within Africa.”

Previously, the oldest securely dated Homo sapiens fossils were discovered in at two sites in Ethiopia, dating 195,000 and 160,000 years old. Consequently, many researchers believed that all humans living today descended from a population that lived in east Africa around 200,000 years ago.

“Many of these fossils have been known for a long time, but fossils discovered during the recent excavations significantly added to the collection making it possible to undertake a comprehensive study of the cranial and dental remains,” notes Bailey. “All data point to a set of derived H. sapiens features suggesting that some aspects of the modern human form began as early as 300,000 years ago. Moreover, it indicates that modern human origins was likely a pan-African event, rather than being concentrated in east Africa.”