The study of two rare childhood neurodegenerative diseases leads St. Jude Children’s Research Hospital scientists to a new source of DNA damage that may play a role in a wide range of health problems, including cancer 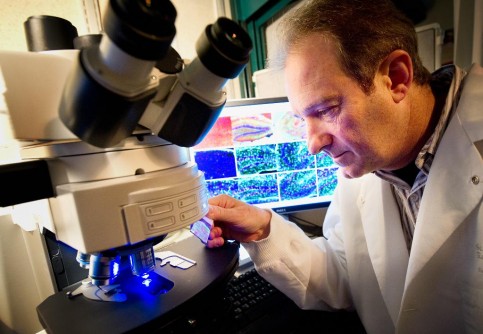 Peter McKinnon, Ph.D., is a member of the St. Jude Children's Research Hospital Department of Genetics.

Researchers showed for the first time that an enzyme required for normal DNA functioning causes DNA damage in the developing brain. DNA is the molecule found in nearly every cell that carries the instructions needed to assemble and sustain life.

The enzyme is topoisomerase 1 (Top1). Normally, Top1 works by temporarily attaching to and forming a short-lived molecule called a Top1 cleavage complex (Top1cc). Top1ccs cause reversible breaks in one strand of the double-stranded DNA molecule. That prompts DNA to partially unwind, allowing cells to access the DNA molecule in preparation for cell division or to begin production of the proteins that do the work of cells.

Different factors, including the free radicals that are a byproduct of oxygen metabolism, result in Top1ccs becoming trapped on DNA and accumulating in cells. This study, however, is the first to link the buildup to disease. The results also broaden scientific understanding of the mechanisms that maintain brain health.

Investigators made the connection between DNA damage and accumulation of Top1cc while studying DNA repair problems in the rare neurodegenerative disorders ataxia telangiectasia (A-T) and spinocerebellar ataxia with axonal neuropathy 1(SCAN1). The diseases both involve progressive difficulty with walking and other movement. This study showed that A-T and SCAN1 also share the buildup of Top1ccs as a common mechanism of DNA damage. A-T is associated with a range of other health problems, including an increased risk of leukemia, lymphoma and other cancers.

“We are now working to understand how this newly recognized source of DNA damage might contribute to tumor development or the age-related DNA damage in the brain that is associated with neurodegenerative disorders like Alzheimer’s disease,” said co-corresponding author Peter McKinnon, Ph.D., a member of the St. Jude Department of Genetics. The co-corresponding author is Sachin Katyal, Ph.D., of the University of Manitoba Department of Pharmacology and Therapeutics and formerly of St. Jude.

A-T and SCAN1 are caused by mutations in different enzymes involved in DNA repair. Mutations in the ATM protein lead to A-T. Alterations in the Tdp1 protein cause SCAN1.

Working in nerve cells growing in the laboratory and in the nervous system of specially bred mice, researchers showed for the first time that ATM and Tdp1 work cooperatively to repair breaks in DNA. Scientists also demonstrated how the proteins accomplish the task.

The results revealed a new role for ATM in repairing single-strand DNA breaks. Until this study, ATM was linked to double-strand DNA repair. ATM was also known to work exclusively as a protein kinase. Kinases are enzymes that use chemicals called phosphate groups to regulate other proteins.

Scientists reported that when Top1ccs are trapped ATM functions as a protein kinase and alert cells to the DNA damage. But researchers found ATM also serves a more direct role by marking the trapped Top1ccs for degradation by the protein complex cells use to get rid of damaged or unnecessary proteins. ATM accomplishes that task by promoting the addition of certain proteins called ubiquitin and SUMO to the Top1cc surface.

Tdp1 then completes the DNA-repair process by severing the chemical bonds that tether Top1 to DNA.

Mice lacking either Atm or Tdp1 survived with apparently normal neurological function. But compared to normal mice, the animals missing either protein had elevated levels of Top1cc. Those levels rose sharply during periods of rapid brain development and in response to radiation, oxidation and other factors known to cause breaks in DNA.

When researchers knocked out both Atm and Tdp1, Top1cc accumulation rose substantially as did a form of programmed cell death called apoptosis. Investigators reported that apoptosis was concentrated in the developing brain and few mice survived to birth. McKinnon said the results add to evidence that the brain is particularly sensitive to DNA damage.

Researchers then used the anti-cancer drug topotecan to link elevated levels of Top1cc to the cell death and other problems seen in mice lacking Atm and Tdp1. Topotecan works by trapping Top1ccs in tumor cells, resulting in the DNA damage that triggers apoptosis. Investigators showed that the impact of Top1cc accumulation was strikingly similar whether the cause was topotecan or the loss of Atm and Tdp1.

The research was funded in part by grants (NS37956, CA96832, CA21765, GM59413) from the National Institutes of Health (NIH); grants (CA52814, CA82313) from the National Cancer Institute, part of the NIH; the Geoffrey Beene Foundation, the Goodwin Foundation, the University of Manitoba, CancerCare Manitoba, the Manitoba Health Research Council Establishment Award and ALSAC.