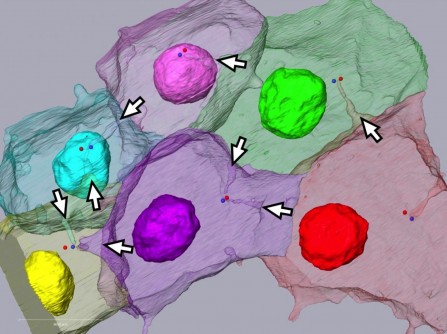 In the cell, the invaginations (white arrows) extend to the centrosome (blue/red dots).

Newswise — Cell division is a fundamental process of life, producing two cells from one single cell at each cell division. During animal development, a fertilized egg divides many times, increasing the number of cells, which are precisely organized within the animal's body. How many times a cell undergoes cell division and how the two daughter cells are positioned after the division can be critical for shaping the animal. Although the machinery essential for cell division is well characterized and evolutionarily conserved, it remains unknown in most animals how a cell division can become oriented relative to the animal's body axis. The work by Negishi et al., published recently in the electronic journal eLife, has revealed that in the sea squirt (Ciona intestinalis) embryo, the orientation of the cell division machinery in epithelial cells is controlled by a unique cell membrane structure, which we call an "invagination".

The first author, Dr. Takefumi Negishi, recalls "When I observed this structure dynamically moving and extending within the cell, I immediately thought this might be playing an essential role for cellular function."

Live imaging by fluorescence microscopy revealed that the invaginations originate from the posterior (tail) side of each epithelial cell and grows intracellularly toward the centrosome, an essential component of the cell division machinery. Using a specialized electron microscopy called "SBF-SEM", the authors demonstrated that the tip of invagination associates closely with the centrosome. Furthermore, laser cutting of the invagination resulted in immediate recoil of both cut ends to opposite directions, highlighting that this polarized membrane structure is under tension. Based on these findings, the authors propose an entirely new model for controlling cell division orientation, which involves the polarized membrane structure repositioning the cell division machinery to one end of the cell, thus orientating the subsequent cell division. Professor Naoto Ueno, who co-supervised the current study, states "We hope our findings facilitates studies on similar membrane structures in other animals that might have diverse biological functions."