Numbers of divisions for Chlamydomonas cells scale with mother cell size. Left to right are cells of increasing size with the first cell too small to divide and next four undergoing one, two, three or four divisions to produce 2, 4, 8 or 16 daughters. 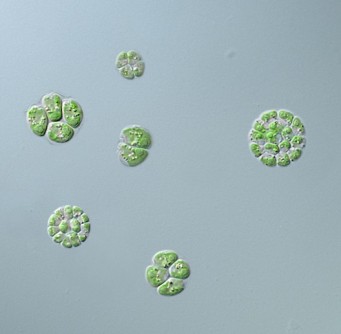 Clusters of wild-type Chlamydomonas cells and mutants in the division counting pathway that divided too many or too few times.

Newswise — James Umen, Ph.D., associate member at Donald Danforth Plant Science Center, and colleagues have discovered a protein that enables the single-celled green alga Chlamydomonas to count cell divisions, a process that is critically important for its cells to maintain optimal size. The findings were published March 25, in a paper titled, “A new class of cyclin dependent kinase in Chlamydomonas is required for coupling cell size to cell division,” in the open access journal eLife. Umen and his team including lead authors postdoctoral scientist Yubing Li and graduate student Dianyi Liu, identified a “sizer” protein called CDKG1 that helps Chlamydomonas count cell divisions.

Unlike the textbook paradigm of cell proliferation where cells double in size and then immediately split into two new daughters, cells of Chlamydomonas and many of its green algal relatives can enlarge more than ten times in size before they start dividing.

“If they were to only divide once after growing so large they would continue to get bigger and eventually would outgrow themselves and die,” said Umen. “Chlamydomonas solves this size-control problem by rapidly dividing several times in succession until its daughter cells have been reduced to an appropriate size and are then ready to start growing again. The puzzle is how Chlamydomonas mother cells determine their size and count out the appropriate number of divisions.”

The paper describes a process where cells produce a limited amount of CDKG1 just before they are about to start dividing. Initially, there is a high concentration of CDKG1, but with each round of division some of it gets broken down and the rest is parceled into daughters, each of which receives less than half the CDKG1 that its mother had. By the last round of division, the amount of CKDG1 per cell has dropped to almost undetectable levels.

The team found that the larger a cell had grown prior to the division the more CDKG1 it produced and the more times it could divide. Based on these observations Umen and coworkers hypothesized that CDKG1 might act like a gauge or ruler that enables cells to count out the appropriate number of divisions by coupling the amount of CDKG1 made to mother cell size. Accordingly, the authors found that when cells could not produce CDKG1 they stopped dividing prematurely and ended up too large, and when cells were forced to produce excess CDKG1 they underwent extra divisions and became too small.

Cell division and size control underlie biomass traits in algae whose manipulation could be critical for improving yields in next-generation algal biofuel crops; but the discovery of CDKG1 and how it helps cells count divisions has implications far outside of green algae where it was discovered. The authors found that CDKG1 is analogous to a human protein called CDK4/6 that stimulates cell proliferation and whose activity is frequently misregulated in cancers. Until recently, it was thought that CDK4/6-like proteins were limited to complex multicellular organisms like animals. Finding a similar protein to CDK4/6 in a unicellular alga not only forces a rethinking about when and how such proteins arose during evolution but opens up new opportunities to investigate genetic mechanisms of cell division control that have deeper roots than previously imagined.

About The Donald Danforth Plant Science CenterFounded in 1998, the Donald Danforth Plant Science Center is a not-for-profit research institute with a mission to improve the human condition through plant science. Research, education and outreach aim to have impact at the nexus of food security and the environment, and position the St. Louis region as a world center for plant science. The center’s work is funded through competitive grants from many sources, including the National Institutes of Health, U.S. Department of Energy, National Science Foundation, and the Bill & Melinda Gates Foundation. To keep up to date with Danforth Center’s current operations and areas of research, please visit, www.danforthcenter.org, featuring information on Center scientists, news, and the “Roots & Shoots” blog. Follow us on Twitter at @DanforthCenter.