Discovery Puts the Brakes on HIV's Ability to Infect 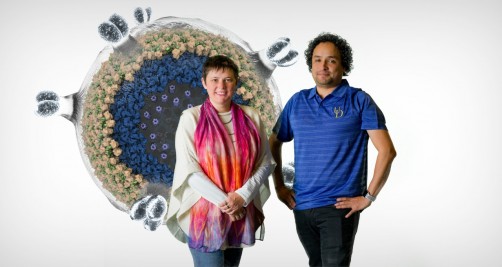 Tatyana Polenova and Juan Perilla, professors in the University of Delaware's Department of Chemistry and Biochemistry, with Perilla's computer-generated model of HIV, the virus that causes AIDS.

Newswise — Viewed with a microscope, the virus faintly resembles a pineapple--the universal symbol of welcome. But HIV, the virus that causes AIDS, is anything but that. It has claimed the lives of more than 35 million people so far.

In a study led by the University of Delaware and the University of Pittsburgh School of Medicine, researchers discovered a "brake" that interferes with HIV's development into an infectious agent. This mechanism prevents the capsid--the protein shell covering the virus--from forming.

The finding, which was published in Nature Communications, was made by an interdisciplinary research team from UD, the University of Pittsburgh School of Medicine, University of Illinois, National Cancer Institute, DFH Pharma and Vanderbilt University Medical Center. The results are based on seven years of excruciatingly detailed studies of the structure and dynamics of HIV early and late in its life cycle. The movements of the virus molecules were measured experimentally and simulated in quadrillionths of a second--that's much faster than the blink of an eye or the flutter of a hummingbird's wings.

"People used to be fixated on the static structures of viruses, but they are not rock solid," said Tatyana Polenova, professor in UD's Department of Chemistry and Biochemistry. She is an expert in nuclear magnetic resonance (NMR) spectroscopy, which helps scientists identify and pinpoint the location of every atom in a structure and how each atom moves.

"Viruses like HIV and their constituent protein and nucleic acid molecules are dynamic entities that are constantly expanding and shrinking," she added. "Their motions are like breathing."

Polenova said molecules in the HIV virus operate in concert, yet within each molecule motions occur over many different time scales, a difficult scenario to simulate, to be sure. But not too complex for Juan Perilla, who joined the UD faculty as an assistant professor this past June. A quantitative biophysicist, Perilla created the first structural models of HIV as a postdoctoral scientist at the University of Illinois. Today, at UD, he routinely uses some of the world's largest supercomputers to generate simulations of the HIV virus and its many moving parts.

Stopping a virus from maturing

As the HIV virus develops, a cascade of events occurs, affecting its structure and ability to infect. Think of the TV cooking show "Chopped." But in this case, protein building blocks get methodically "cleaved" or cut from a larger, master protein called Gag.

By integrating state-of-the-art techniques, including solid-state and solution NMR, high-end computer simulations, and cryo-electron microscopy (for which the Nobel Prize was awarded earlier this fall) the researchers answered a longstanding question about how the final step in the maturation of the virus occurs--a process in which a noninfectious immature virion turns into an infectious virus particle.

The team discovered that a key peptide--spacer peptide 1 (SP1)--has to be in a highly mobile structure to be cut by the virus protease, the enzyme that acts like a cleaver. In simulations, the peptide resembles a thin, yarn-like strand attached to corkscrews of curled ribbons in constant motion.

"This peptide is always there in the final maturation step, but we were surprised that it is so disordered and dynamic," Polenova said.

Once the SP1 peptide is cut, the HIV virus forms its protective capsid and becomes infectious. But how do you stop that process? In team experiments at the University of Pittsburgh led by Angela Gronenborn, the anti-HIV inhibitor Bevirimat was shown to interact with the SPI peptide, thus preventing the development of the virus's capsid "coat."

Zeroing in on potential drug targets to stop HIV from becoming infectious by disrupting the virus's maturation is an ongoing goal for the team.

"We have to have a sense of these short-lived molecular fluctuations and processes--of protein cleavage and capsid generation," Perilla said. "To add a new generation of capsid inhibitors to prevent HIV, you have to have very specific times and rates at which these drugs will work."

Perilla and Polenova also said an extensive team of people is critical, including experimentalists and computational scientists, who have expertise in multiple biophysical techniques, such as NMR and cryo-EM, and across the disciplines of structural biology, biophysics, biochemistry and virology.

"This work would be impossible without our combined strength--I tell my students they need to learn to collaborate with people in other fields," said Polenova. Also critical, she said, is the availability of cutting edge infrastructure in high-field NMR at the University of Delaware and at ultra-high field NMR centers across the U.S., including the National High Magnetic Field Laboratory, and internationally, such as the National Center for Scientific Research in Lyon, France, where Polenova and her students travel to perform NMR experiments.

She and Perilla both credit Angela Gronenborn, their collaborator at the University of Pittsburgh, for transforming their work through the Pittsburgh Center for HIV Protein Interactions, a national research center that Gronenborn established about a decade ago with funding from the National Institutes of Health.

"Science is moving away from the single scientist being able to peer at things at atomic resolution," Polenova said. "It's no longer the situation of doing one thing as a single investigator. Now, we all come together."

The research was funded by the National Institutes of Health.

In addition to Polenova and Perilla, other UD authors of the paper included doctoral student Mingzhang "Maple" Wang, staff scientists Caitlin Quinn and Guangjin Hou, and postdoctoral researchers Huilan Zhang and Christopher Suiter--all from the UD Department of Chemistry and Biochemistry. Authors from the University of Pittsburgh School of Medicine included Angela Gronenborn, Randall Shirra, Jr., In-Ja Byeon and Peijun Zhang. Eric O. Freed from the National Cancer Institute, Theodore J. Nitz from DFH Pharma, and Klaus Schulten from the University of Illinois also were co-authors.