Discovery Reveals Planet Almost as Hot as the Sun 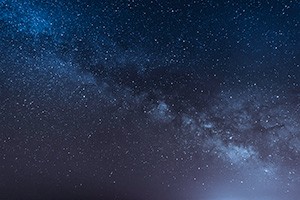 Newswise — A newly discovered planet almost three times the size of Jupiter is fascinating scientists with a unique orbit, atmospheric features and a daytime temperature hotter than most stars.

According to research published in the journal Nature, an international team of scientists, including Justin R. Crepp, Freimann Assistant Professor of Physics at the University of Notre Dame, say the planet is 2.8 times bigger than Jupiter and reaches temperatures over 7,800 degrees Fahrenheit (4,600 Kelvin) during the day – just 2,000 degrees Fahrenheit (1,200 Kelvin) cooler than the sun.

The planet may even have a tail like a comet.

KELT-9b runs a close orbit to KELT-9, the hottest, most massive and brightest star yet found to host a transiting giant planet. Though KELT-9b is larger than Jupiter, it is not as dense. Researchers believe low surface gravity combined with its extremely high temperature contributes to an in-flated and gaseous atmosphere.

Another unique aspect to KELT-9b — the planet orbits the poles of its host star rather than its equator.

“It is unclear how KELT-9b obtained its peculiar orbit,” said Crepp. “In addition to being ridiculously close, the planet orbits about the poles of its parent star rather than its equator. One can only imagine how it got there.”

As they continue to learn more about the planet, scientists are keeping an eye on its unique atmosphere.

KELT-9b is pummeled by ultraviolet radiation on a daily basis, which could be causing erosion of planetary surface material. At current estimates, its host star could engulf the gas giant planet. "If gas giant planets like KELT-9b possess solid rocky cores as some theories suggest, the planet may be boiled down to a barren rock, like Mercury,” said Keivan Stassun, professor of physics and astronomy at Vanderbilt University who led the study with Scott Gaudi at The Ohio State University.

Exploration of uninhabitable planets like KELT-9b provides insight into the nature of planetary systems around massive stars — including planetary formation and the impact of envi-ronmental conditions.