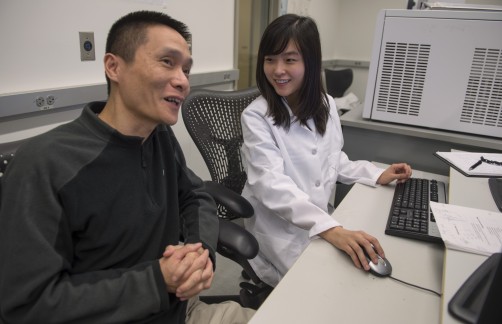 A multi-institutional research team led by the University of Chicago’s Chuan He and Xiao Wang has discovered a fundamental new way that cells change and control gene expression, through regulated messenger RNA decay. 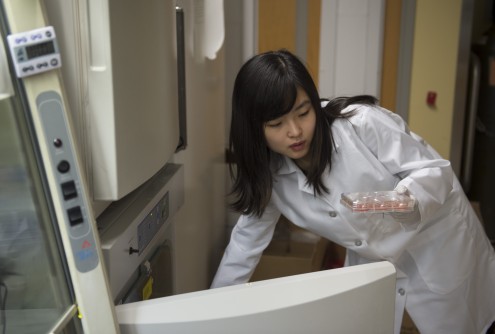 University of Chicago graduate student Xiao Wang and her colleagues based the results of their Nature paper on RNA modification on analysis of HeLa cells, a line of human cells widely used in laboratory research.

Newswise — Researchers had known for several decades that a certain chemical modification exists on messenger ribonucleic acid (mRNA), which is essential to the flow of genetic information. But only recently did experiments at the University of Chicago show that one major function of this modification governs the longevity and decay of RNA, a process critical to the development of healthy cells.

The chemical modification on mRNA in question is called N6-methyladenosine (m6A). A recent study by UChicago scientists reveals how the m6A modification on mRNA could affect the half life of mRNA that in turn regulates cellular protein quantities That discovery could provide fundamental insights into healthy functioning and disorders such as obesity, diabetes, and infertility.

The m6A modification “affects a huge number of messenger RNA in human cells, and yet we did not know its exact function,” said Chuan He, professor in chemistry at UChicago and a recently selected investigator of the Howard Hughes Medical Institute. He, Xiao Wang and 11 co-authors from UChicago, University of California, San Diego, and Peking University reported their findings on m6A in the Jan. 2 issue of Nature.

RNA in human cells becomes constantly depleted as it produces proteins, an instability that is essential to biology. “Whenever a cells starts to differentiate, transform into a different type of cell, it needs to express a different set of proteins using a different set of messenger RNA,” He said. “It can’t be the original set.”

The disposal of old RNA allows for the addition of new RNA and the production of different proteins. The Nature study documents that this process is regulated by the insertion or removal of a methyl, a chemical group commonly found in organic compounds.

“Biology is about protein expression regulation: which proteins, how many and at what point,” He explained. “If you have the right pattern you get healthy cells. If you get the wrong pattern, you get disease.”

It is well known that genetic factors can control protein expression, but the methylation and demethylation of RNA can be epigenetic—operating independent of the sequence of deoxyribonucleic acid (DNA). “This is a very important yet under-explored field,” said Wang, the study’s lead author and a graduate student in chemistry at UChicago. “It’s also a field that is expanding very quickly.”

Researchers had long known the presence of the m6A methylation on messenger RNA, but why this occurred remained unknown. He and his associates took a major step in 2011 when they discovered the reverse of the methylation process, demethylation. This discovery involved a so-called “eraser protein” that removed the methyl from RNA, a defect of which leads to obesity. “We basically said, ‘Look, if you have certain defect of this function, you get obesity, so there’s something going on fundamentally interesting. This methylation appears to play important roles in biological regulation.” He and his associates have now shown that the methylation affects the decay of messenger RNA. “People who are interested in messenger RNA decay or all kinds of cytoplasmic RNA biology now have a new pathway to consider,” Wang said.

RNA methylation can vary anywhere from zero to 100 percent as needed to either fine-tune or globally affect protein production. “Researchers had realized that one way to tune the production of protein is to control the lifetime of messenger RNA,” Wang said. “We discovered that reversible methylation could be an important parameter in regulating mRNA lifetime.”

An extended RNA lifetime would result in more protein production. “If you have a defect of the demethylation mechanism, you could dramatically affect cellular protein levels,” He said. And some of those proteins could be essential for energy regulation in the human body, which affects obesity. “Already we know obesity, diabetes and fertility are connected to this, and I’m sure we’ll find many other connections.”

The demethylases are commonly called erasers. Working alongside eraser proteins are “writer” and “reader” proteins. Writer proteins are the ones that insert methyls into RNA. He’s group discovered the first two known eraser proteins since 2011. His group has also identified at least two writer proteins, and many readers, including YTHDF2 that selectively binds m6A in mRNA and controls the mRNA stability as described in their Nature paper. “YTHDF2 is the first reader protein we have characterized. In fact, it is the first m6A reader protein characterized so far,” He said.

Reader proteins endow biological function. “Something has to read a methyl to give it a biological function,” He explained. “When you take out the methyl the readers will not read, so there’s the regulation. When you put a methyl in, the reader will read.” The Nature paper presents the first discovery of a direct link between RNA methylation and biological function, one that tunes the lifetime of mRNA. “Hopefully, I’ll have more to report in the future,” He said.

“What we have discovered here is a very fundamental biology,” He said. “Next we’ll look into development, cell differentiation, even neurobiology. This could impact almost every aspect of biology.” 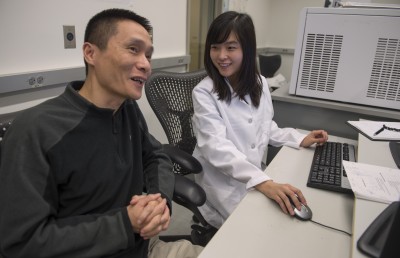 Caption: A multi-institutional research team led by the University of Chicago’s Chuan He and Xiao Wang has discovered a fundamental new way that cells change and control gene expression, through regulated messenger RNA decay. 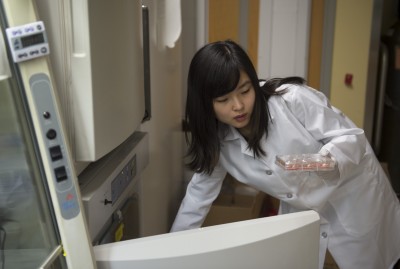 Caption: University of Chicago graduate student Xiao Wang and her colleagues based the results of their Nature paper on RNA modification on analysis of HeLa cells, a line of human cells widely used in laboratory research.