2-Apr-2014 7:30 AM EDT, by University of Alabama at Birmingham
favorite_border 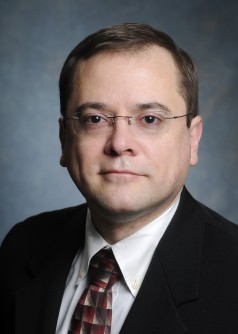 UAB School of Nursing researcher David Vance says as the number of people aging with HIV increases, concerns mount that disease-related cognitive deficits may be compounded by age-related deficits.

Newswise — BIRMINGHAM, Ala. – Nearly half of people living with HIV experience cognitive deficits that may impact instrumental activities of daily living, including driving, according to University of Alabama at Birmingham School of Nursing research published in the March issue of the Journal of the Association of Nurses in AIDS Care.

In a cross-sectional pilot study funded by a pilot grant from the National Institutes of Health-funded UAB Center for AIDS Research, 26 adults age 40 and older were administered demographic, health, psychosocial and driving habit questionnaires, as well as cognitive assessments and driving simulator tests. While the study participants’ viral load — the level of HIV in one’s blood — was unrelated to driving performance, older age was related to poorer driving.

Mixed findings were observed between driving performance and cognitive function on self-reported driving habits of participants.

Previous studies have shown that individuals with HIV, especially as they age, exhibit lower cognitive performance than do uninfected individuals in the domains of speed of processing, psychomotor speed, executive functioning, and learning and memory.

The purpose of this study was to build on this existing research and examine driving simulator performance in an older sample of adults with HIV than in prior studies. The study had three key aims:

• Examine relationships between demographic and mental and physical health variables, and cognitive measures and driving simulator outcomes measures, as well as self-reported driving habits in older adults with HIV

Considering that, by 2015, nearly half of people living with HIV in the United States will be 50 years of age or older, Vance says this is an area that requires further research efforts.

“Driving is perhaps one of the most cognitively complex everyday activities, involving the ability to successfully negotiate one’s environment on the road by making quick decisions and attending and reacting to various stimuli,” Vance said. “The most pronounced and prevalent cognitive deficits in HIV are found in measures of speed and processing — functions essential to safe driving. Previous research shows 29 percent of adults with HIV have indicated a decreased driving ability. That alone means it’s an area that requires further examination.”

The UAB Edward R. Roybal Center for Translational Research in Aging and Mobility provided the infrastructure and facilities for this research. Greer Burkholder, M.D., assistant professor of infectious diseases, supplied information for the research from the UAB School of Medicine’s 1917 Clinic electronic medical database.