The rare disease LCH discovered in the remains of a dinosaur that lived in Canada at least 60 million years ago, TAU researchers say 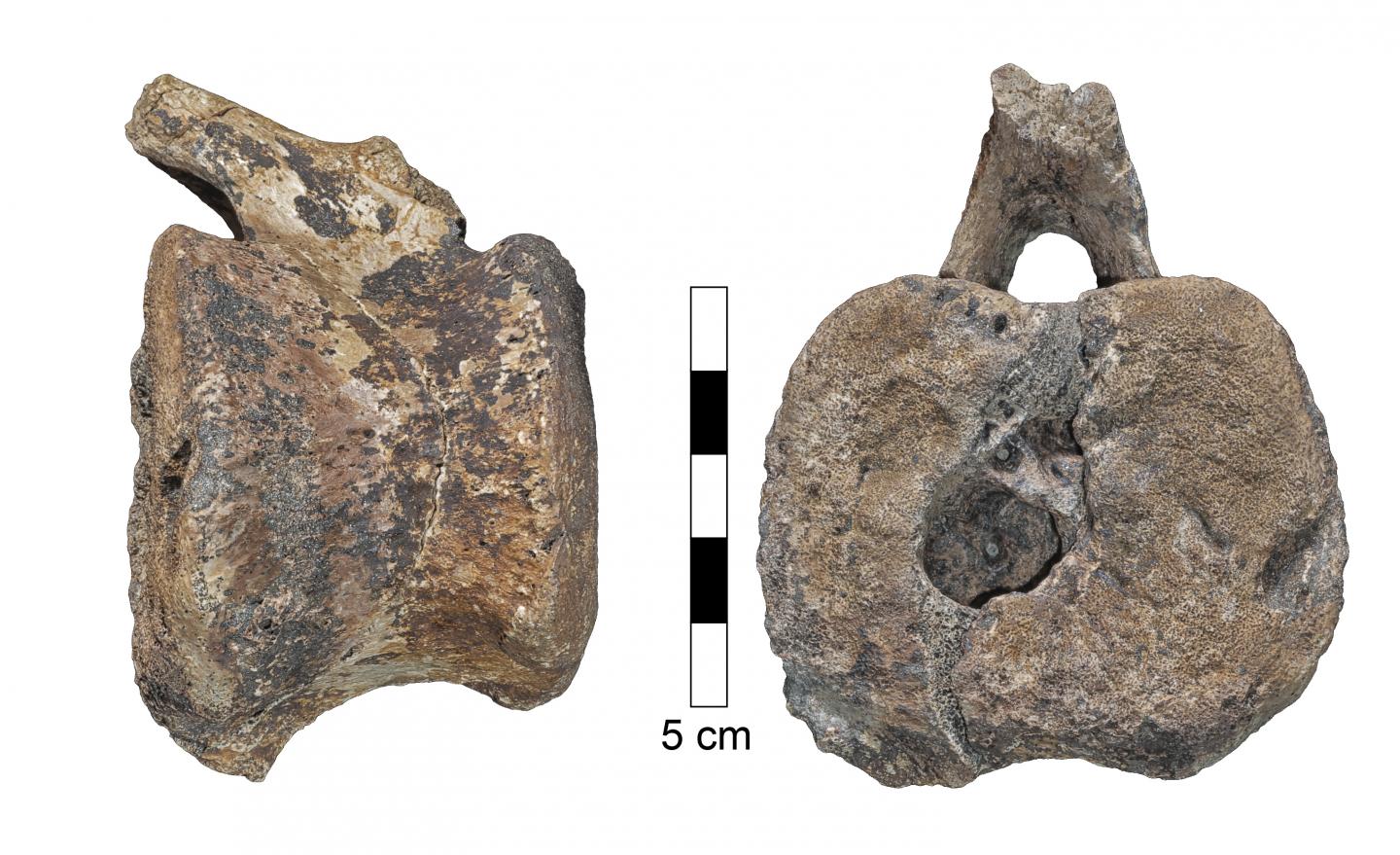 Photograph of the larger hadrosaur vertebra in lateral view (left) and caudal view (right). The space that contained the overgrowth opens to the caudal surface of the vertebra. 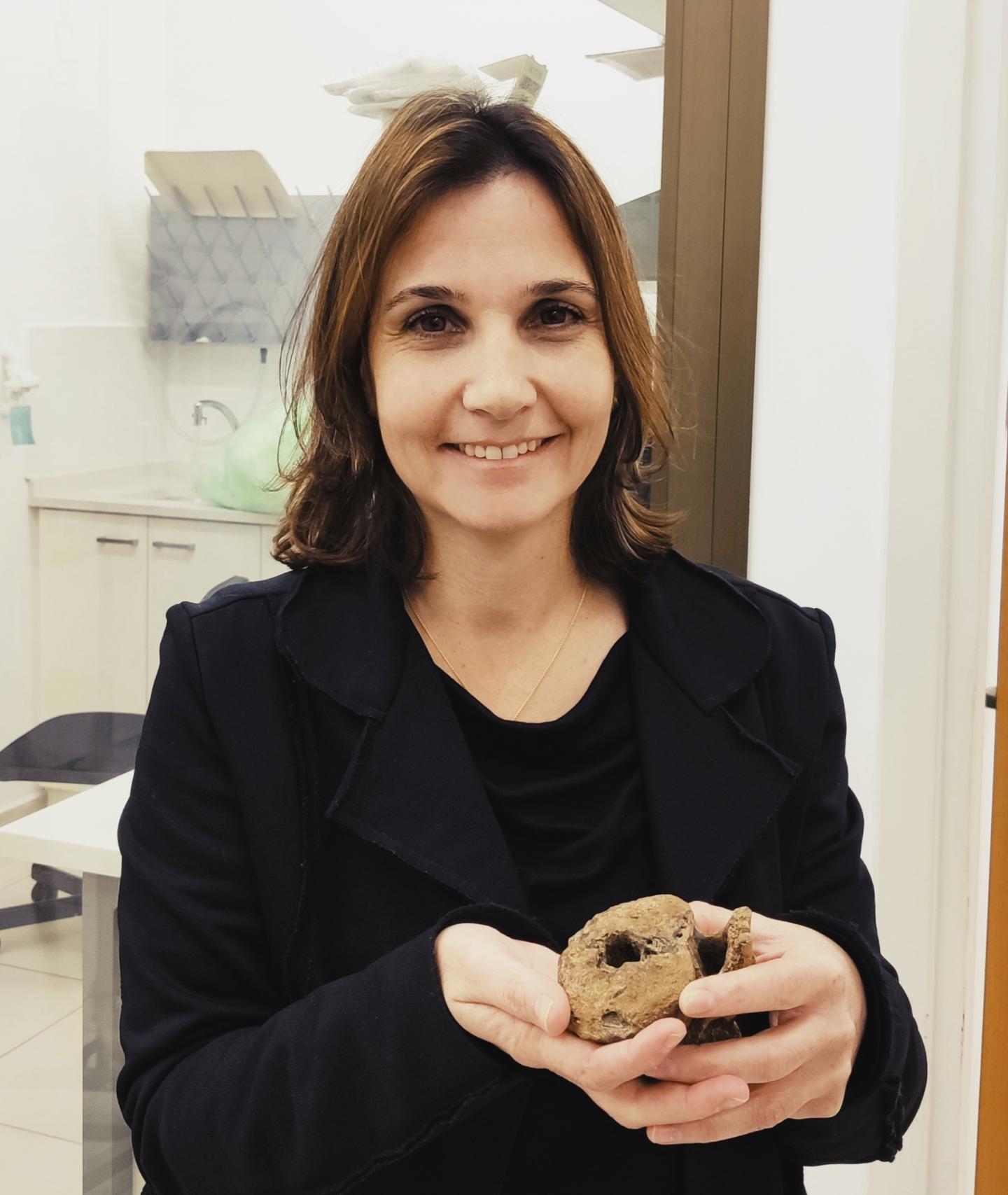 Newswise — The fossilized tail of a young dinosaur that lived on a prairie in southern Alberta, Canada, is home to the remains of a 60-million-year-old tumor.

Researchers at Tel Aviv University, led by Dr. Hila May of the Department of Anatomy and Anthropology at TAU's Sackler Faculty of Medicine and Dan David Center for Human Evolution and Biohistory Research, have identified this benign tumor as part of the pathology of LCH (Langerhans cell histiocytosis), a rare and sometimes painful disease that still afflicts humans, particularly children under the age of 10.

A study on the TAU discovery was published on February 10 in Scientific Reports. Prof. Bruce Rothschild of Indiana University, Prof. Frank Rühli of the University of Zurich and Mr. Darren Tanke of the Royal Museum of Paleontology also contributed to the research.

"Prof. Rothschild and Tanke spotted an unusual finding in the vertebrae of a tail of a young dinosaur of the grass-eating herbivore species, common in the world 66-80 million years ago," Dr. May explains. "There were large cavities in two of the vertebrae segments, which were unearthed at the Dinosaur Provincial Park in southern Alberta, Canada."

It was the specific shape of the cavities that attracted the attention of researchers.

"They were extremely similar to the cavities produced by tumors associated with the rare disease LCH that still exists today in humans," adds Dr. May. "Most of the LCH-related tumors, which can be very painful, suddenly appear in the bones of children aged 2-10 years. Thankfully, these tumors disappear without intervention in many cases."

The dinosaur tail vertebrae were sent for on-site advanced micro-CT scanning to the Shmunis Family Anthropology Institute at TAU's Dan David Center for Human Evolution and Biohistory Research, Sackler Faculty of Medicine, which is located at the Steinhardt Museum of Natural History.

"The micro-CT produces very high-resolution imaging, up to a few microns," Dr. May says. "We scanned the dinosaur vertebrae and created a computerized 3D reconstruction of the tumor and the blood vessels that fed it. The micro and macro analyses confirmed that it was, in fact, LCH. This is the first time this disease has been identified in a dinosaur."

According to Dr. May, the surprising findings indicate that the disease is not unique to humans, and that it has survived for more than 60 million years.

"These kinds of studies, which are now possible thanks to innovative technology, make an important and interesting contribution to evolutionary medicine, a relatively new field of research that investigates the development and behavior of diseases over time," notes Prof. Israel Hershkovitz of TAU's Department of Anatomy and Anthropology and Dan David Center for Human Evolution and Biohistory Research. "We are trying to understand why certain diseases survive evolution with an eye to deciphering what causes them in order to develop new and effective ways of treating them."

Caption: Photograph of the larger hadrosaur vertebra in lateral view (left) and caudal view (right). The space that contained the overgrowth opens to the caudal surface of the vertebra.