According to new paper in "The Journal of Chemical Physics," adding a disordered boundary to an already disordered charged fluid can have a counterintuitive effect: lowering the overall disorder of the system 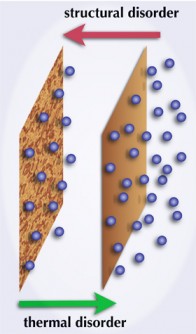 Chaos is not necessarily bad for us if we know how to counteract it with a little properly applied disorder of our own.

Newswise — WASHINGTON, D.C., November 4, 2014--If you took the junk from the back of your closet and combined it with the dirty laundry already on your floor, you would have an even bigger mess. While this principle will likely always hold true for our bedrooms, it turns out that in certain situations, combining messes can actually reduce the disorder of the whole. An international team of researchers from Slovenia and Iran has identified a set of conditions in which adding disorder to a system makes it more orderly. This behavior is known as antifragility, a concept introduced recently to describe similar phenomena in statistics, economics and social science.

In a paper published Nov. 4 in The Journal of Chemical Physics, from AIP Publishing, the researchers found a counterintuitive interplay between two different types of disorder. One is thermodynamic disorder, or entropy. The other is the structural disorder—defects in an idealized system that can change its properties.

“One expects that different types of disorder just add to one another to one final mess at the end,” said Ali Naji, the lead author of the paper and a researcher from the Institute for Research in Fundamental Sciences in Tehran. “But surprisingly, we find that in some cases, structural disorder can counteract the thermal disorder, making the system overall more ordered.”

The exception that the researchers identified involved the interaction between the structural disorder of charged surfaces and the thermal disorder of Coulomb fluids—collections of mobile charged particles, either ions or larger molecules, that interact with each other.

When the researchers put each of these surfaces in contact with a Coulomb fluid, they found that the ions in the Coulomb fluid were more strongly attracted to the disordered surface than to the ordered one. Surprisingly, when they then calculated the entropy of both systems, they found that the randomly charged system had lower entropy than the uniformly charged one—the addition of structural disorder opposed the effects of the Coulomb fluid’s thermal disorder.

Unfortunately, the finding won’t revolutionize our approach to cleaning anytime soon. “This only works for certain cases and under certain conditions,” Naji said. “We find out that the disordered charges have to interact strongly with the mobile charges in the Coulomb fluid in order to have this behavior.” However, the researchers eventually hope to identify these systems in areas more directly applicable to human lives.

“One wonders in what other systems one could observe even more spectacular cases [of these systems] that would help us stave degradation, spontaneous disordering and aging of materials and instill robustness and resilience,” said Rudolf Podgornik, a researcher from the Jozef Stefan Institute and University of Ljubljana, Slovenia who is the senior coauthor of this paper. “Chaos is not necessarily bad for us if we know how to counteract it with a little properly applied disorder of our own.”

The article, "Asymmetric Coulomb fluids at randomly charge dielectric interfaces: Anti-fragility, overcharging, and charge inversion," is authored by Ali Naji, Malihe Ghodrat, Haniyeh Komaie-Moghaddam and Rudolf Podgornik. It was published in The Journal of Chemical Physics on November 4, 2014 and can be accessed at: http://scitation.aip.org/content/aip/journal/jcp/141/17/10.1063/1.4898663

The authors of this paper are affiliated with the Institute for Research in Fundamental Sciences in Tehran, Iran; the J. Stefan Institute in Ljubljana, Slovenia; and the University of Ljubljana, also in Ljubljana.

The Journal of Chemical Physics publishes concise and definitive reports of significant research in the methods and applications of chemical physics.See: http://jcp.aip.org