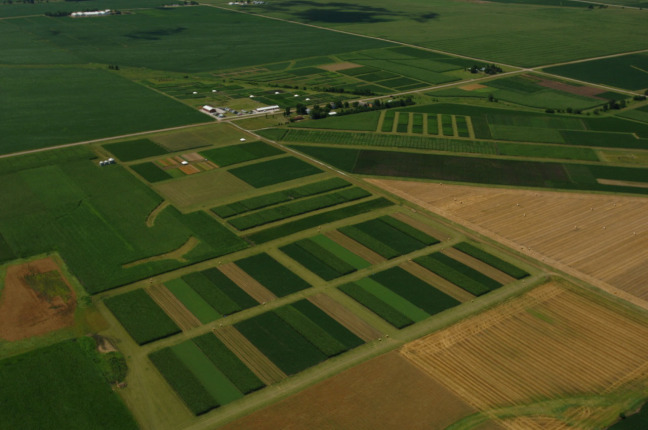 The study, published recently in the academic journal Agriculture, Ecosystems and the Environment, compares the carbon-storage performance of conventional corn-soybean rotations with cropping systems that incorporate perennials and small grains such as oats. Diversified crop rotations protect water quality and have other environmental benefits, but Michael Castellano, a professor of agronomy and co-author of the study, said recent experiments show that improved carbon storage isn’t necessarily among those benefits. Those findings run contrary to a widely held assumption that putting more roots in the ground for longer periods would increase the carbon content of soil, Castellano said.

“We can reject the hypothesis that, in Iowa, diversified cropping systems consistently store carbon better than corn-soybean systems,” he said.

Soil carbon storage has gained attention in recent years because it could play a role in mitigating climate change. Atmospheric carbon acts as a greenhouse gas, but storing carbon in the soil keeps it out of the atmosphere. So researchers are analyzing various agricultural production methods that might enhance carbon storage.

The findings fly in the face of expectations that the extensive root systems of perennials and cover crops would deposit carbon in the soils. Castellano said it’s likely that soil type, weather and environmental conditions play key roles in the ability of diversified rotations to increase soil carbon. Further study of how those variables influence one another will be necessary to accurately predict how farm management practices can increase carbon stocks in the soil.

“Not all practices work in all locations,” Castellano said. “We need better predictability in carbon storage practices. We need to know what works and in what contexts it works.”

The diversified cropping systems in the experiments included rotations of corn, soybean, oats and alfalfa. These rotations mirror the agricultural practices common in Iowa in the first half of the 20th century, before a corn and soybean rotation became the dominant cropping system in the state. These diversified cropping systems provided farmers with grain to feed the horses that powered much of the machinery of the day. Crop rotations that include only corn and soybeans began to dominate the Iowa landscape later, as farming became more mechanized, Castellano said.

But an ISU scientist named John Pesek anticipated the shift to corn-soybean systems and began experimenting with such systems in 1954 at a research farm near Kanawha. That research farm, alongside farms near Nashua and Marsden, provided data for the current study, and Pesek’s foresight paved the way for Castellano and his team.

“In 1954, if you told a farmer that corn-soybean rotations would dominate Iowa, they would have laughed at you,” he said.

The study was led by Hanna Poffenbarger, a former ISU graduate assistant who is currently an assistant professor at the University of Kentucky.