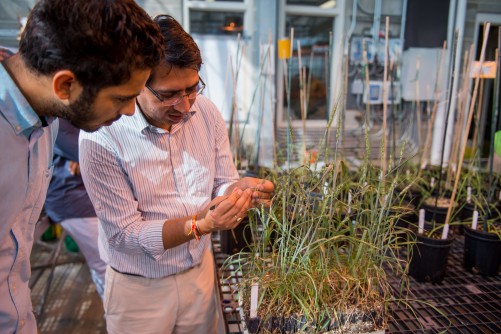 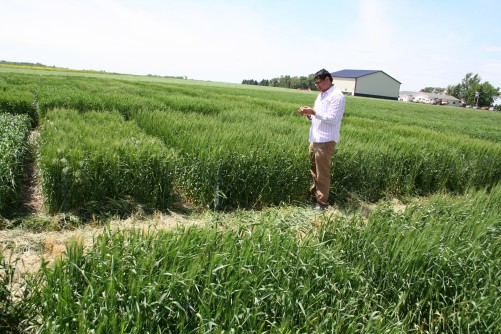 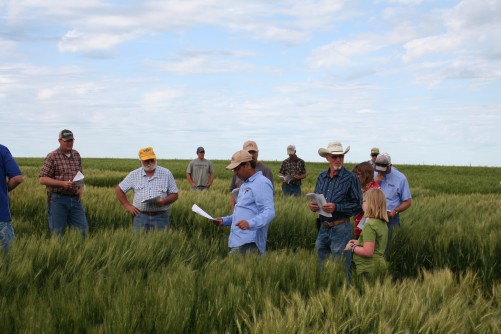 Meeting with producers during field day events, such as this one in Ideal, is an important part of the work that South Dakota winter wheat breeder Sunish Sehgal, center in tan cap and solid blue shirt, does. 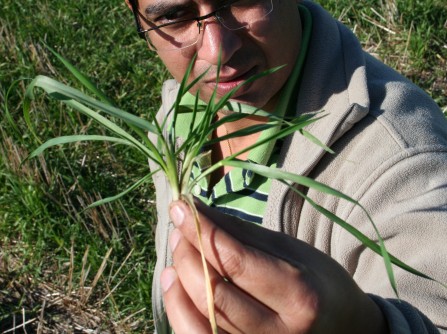 To feed an increasing global population, world wheat production must increase by 2 percent each year, but the average increase in production is now only 1 percent, noted the South Dakota State University plant scientist. “We must increase the productivity of the wheat plant itself, but do so in a sustainable way without damaging the environment while also reducing costs of production. Sehgal sees climate change as a major challenge facing breeders and producers. “We’re experiencing more abrupt fluctuations in weather that can adversely affect production,” he said. A 1-degree temperature increase can cause as much as a 20 to 30 percent reduction in yield.

Exploring diversity in germplasmTo increase favorable genetic variation, Sehgal must first identify parent plants with the traits that he seeks. He evaluates germplasm and cultivars from regional nurseries such as those in Kansas, Nebraska, North Dakota and Montana for yield and resistance to pests and diseases in several South Dakota environments. Sehgal utilizes them to develop more than 500 new genetic combinations each year. In addition, he and his graduate students are also recreating the cross that produced bread wheat in nature about 10,000 years ago. He is crossing wild wheat and pasta wheat, which exist in both wild and cultivated varieties. “This happened only twice in nature,” he said, noting that only certain traits went into the bread wheat.

His research team screened parent plants for molecular markers to identify a core set of 60 pasta wheat varieties that they will try to mate with similarly screened wild wheat to make 100 new lines. Funding for winter wheat research comes the U.S. Department of Agriculture and the South Dakota Wheat Commission.

“Some of these lines have 20 to 22 percent protein,” Sehgal said, in comparison to the typical 14 to 15 percent wheat protein content. “We want to mobilize this variability into bread wheat.”

Responding to producer needs Sehgal points to cold tolerance as his No. 1 breeding priority. South Dakota farmers plant 1.5 million acres of winter wheat, but anywhere from 250,000 to 500,000 acres can be lost due to winterkill and drought. “That’s why some producers shy away from winter wheat,” he said. Expansion of the federal crop insurance program to allow farmers in 16 northeastern South Dakota counties to insure their winter wheat crop may help increase production area. In addition, Sehgal cited identifying resistance to diseases, including leaf rust and wheat streak mosaic virus, and insect pests as major challenges. However, Sehgal noted that recently bacterial leaf streak and stripe rust have also caused significant damage in some regions.

Furthermore, producers want shorter varieties that have less straw and ones that mature earlier without sacrificing yield, according to Sehgal. This may also give farmers the option of growing a second crop, may reduce terminal stress or better fit their schedule.

Exploiting genetic diversity while using new scientific and breeding techniques like doubled haploids and genome wide selection will help increase the pace of wheat improvement, Sehgal explained. “Breeding is a numbers game—the more combinations we test, the more likely we are to identify a superior plant.” 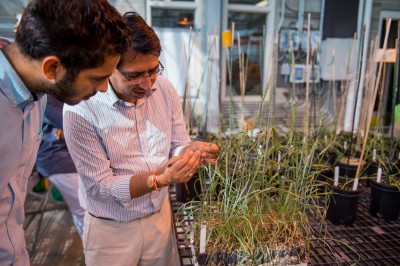 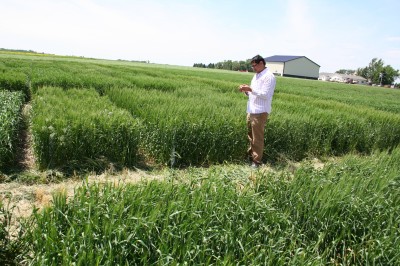 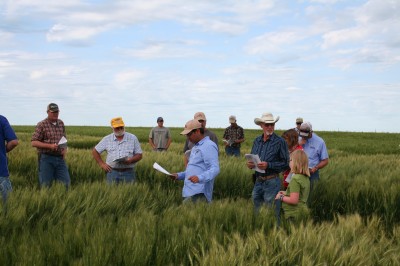 Caption: Meeting with producers during field day events, such as this one in Ideal, is an important part of the work that South Dakota winter wheat breeder Sunish Sehgal, center in tan cap and solid blue shirt, does. 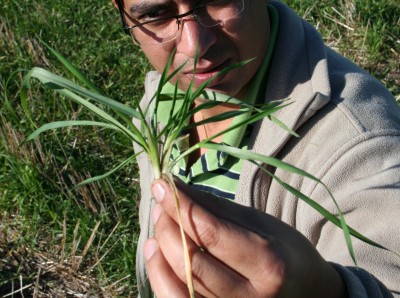