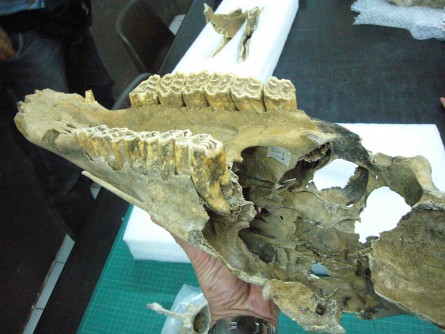 Bones of a new species of the hippidion horse family discovered by the research group in South America.

Newswise — Ancient DNA retrieved from extinct horse species from around the world has challenged one of the textbook examples of evolution – the fossil record of the horse family Equidae over the past 55 million years.

The study, published today in the Proceedings of the National Academy of Sciences, involved an international team of researchers and the Australian Centre for Ancient DNA (ACAD) based at the University of Adelaide.

Only the modern horse, zebras, wild asses and donkey survive today, but many other lineages have become extinct over the last 50,000 years.

ACAD Director Professor Alan Cooper says despite an excellent fossil record of the Equidae, there are still many gaps in our evolutionary knowledge. “Our results change both the basic picture of recent equid evolution, and ideas about the number and nature of extinct species.”

The study used bones from caves to identify new horse species in Eurasia and South America, and reveal that the Cape zebra, an extinct giant species from South Africa, were simply large variants of the modern Plains zebra. The Cape zebra weighed up to 400 kilograms and stood up to 150 centimetres at the shoulder blades.

“The Plains zebra group once included the famous extinct quagga, so our results confirm that this group was highly variable in both coat colour and size.”

Lead author of the paper, Dr Ludovic Orlando from Ecole Normale Supérieure of Lyon, says the group discovered a new species of the distinct, small hippidion horse in South America.

“Previous fossil records suggested this group was part of an ancient lineage from North America but the DNA showed these unusual forms were part of the modern radiation of equid species,” Dr Orlando says.

A new species of ass was also detected on the Russian Plains and appears to be related to European fossils dating back more than 1.5 million years. Carbon dates on the bones reveal that this species was alive as recently as 50,000 years ago.

“Overall, the new genetic results suggest that we have under-estimated how much a single species can vary over time and space, and mistakenly assumed more diversity among extinct species of megafauna,” Professor Cooper says.

“This has important implications for our understanding of human evolution, where a large number of species are currently recognised from a relatively fragmentary fossil record.

“It also implies that the loss of species diversity that occurred during the megafaunal extinctions at the end of the last Ice Age may not have been as extensive as previously thought.

In contrast, ancient DNA studies have revealed that the loss of genetic diversity in many surviving species appears to have been extremely severe,” Professor Cooper says. “This has serious implications for biodiversity and the future impacts of climate change.”