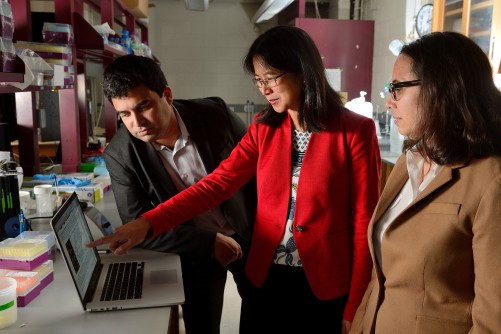 Newswise — Biochemical engineers at the Johns Hopkins University have used sequences of DNA molecules to induce shape-changing in water-based gels, demonstrating a new tactic to produce “soft” robots and “smart” medical devices that do not rely on cumbersome wires, batteries or tethers.

The research advance, supervised by three faculty members in the university’s Whiting School of Engineering, is detailed in the Sept. 15 issue of the journal Science.

The team members reported that their process used specific DNA sequences called “hairpins” to cause a centimeter-size hydrogel sample to swell to 100 times its original volume. The reaction was then halted by a different DNA sequence, dubbed a “terminator hairpin.”

This approach could make it possible to weave moving parts into soft materials. The researchers have suggested that their process could someday play a role in creating smart materials, metamorphic devices, complex programmed actuators and autonomous robots with potential marine and medical applications.

To control how shape-shifting occurs in different parts of the target hydrogel, the researchers took a cue from the computer industry. They employed a photo-patterning technique similar to the one used to make tiny but intricate microchips. Various biochemical patterns embedded in different regions of the gel were designed to respond to specific DNA instructions to cause bending, folding or other responses.

“DNA sequences can be thought of as an analog to computer code,” said David H. Gracias, a professor in the university’s Department of Chemical and Biomolecular Engineering, and one of two senior authors of the Science article. “Just as computer software can direct specific tasks, DNA sequences can cause a material to bend or expand in a certain way at a specific site.”

He added that this is not an unusual occurrence in nature. “Shape changing is very important in biology,” Gracias said. “Think about how a caterpillar turns into butterfly.”

The study’s other senior author, Rebecca Schulman, is an assistant professor in the same department. Her research group designs intelligent materials and devices using techniques from DNA nanotechnology. “We’ve been fascinated by how living cells can use chemical signals to decide how to grow or move and use chemical energy to power themselves,” she said. “We wanted to build machines that could act in a similar way. Our fabrication technology makes it possible to design very complicated devices in a range of sizes.”

Thao (Vicky) Nguyen, a Johns Hopkins expert in the mechanics of polymers and biomaterials, provided key contributions to the research and was a co-author of the paper. “Using computer simulations, we developed a design rule to transform the large swelling of the hydrogel into the desired shape-change response,” she said. Nguyen is an associate professor and the Marlin U. Zimmerman Jr. Faculty Scholar in the Department of Mechanical Engineering.”

To confirm their ability to control which hydrogel targets were activated, the team members used DNA sequence-responsive flower-shaped hydrogels. In each “flower,” two sets of petals were fabricated, and each set was designed to respond only to one of two different DNA sequences. When exposed to both sequences, all of the petals folded in response. But when they were exposed to just one of the sequences, only the petals matched to that sequence folded.

The team also fabricated hydrogel crab-shaped devices in which the antennae, claws and legs each curled up in in response to their matching DNA sequence. The crab devices remained in their actuated state for at least 60 days. The crab shape was selected in honor of the popular seafood served in the university’s home state of Maryland.

The new technology detailed in the Science paper is protected by a provisional patent obtained through the university’s Johns Hopkins Tech Ventures office.