The selected article is already in your list of favorites. Go to My Favorites

Do Insects Think about the Future? 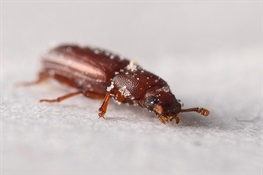 Do Insects Think about the Future?

1. Researchers looked at whether female red flour beetles (Tribolium castaneum) assess both current and future competition at sites where they lay eggs, testing the theory by manipulating both beetle density, which represented current competition, and sex ratio, which represented future competition, at laying sites.
2. They found that the female beetles responded to both density and sex ratio: they layer fewer eggs in higher density areas and more eggs when the sex ratio was male-biased.
3. Eggs laid at male-biased sites were more likely to develop into adults, so females laying eggs at these sites would have higher fitness than females laying eggs at female-biased sites.