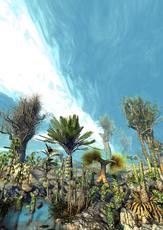 Are plant species real or imaginary? Many botanists have argued grouping plants into species is merely an exercise of convenience.

BLOOMINGTON, Ind. -- Newswise — Notoriously "promiscuous" plants like oaks and dandelions have led some biologists to conclude plants cannot be divided into species the same way animals are.

That perception is wrong, say Indiana University Bloomington scientists in this week's Nature. Their analysis of 882 plant and animal species and 1,347 inter-species crossings -- the first large-scale comparison of species barriers in plants and animals -- showed that plant species are just as easily categorized as animal species.

"Not only are plants just as easily subdivided into species as animals when analyzed statistically, plants are more likely to be reproductively isolated due to hybrid sterility," said evolutionary biologist Loren Rieseberg, who led the study. "Most plant species are indeed 'real.' The problem has been that botanists have been way over-attracted to the plant species that readily hybridize and where the hybrids perpetuate themselves asexually. While it's true that dandelions and blackberries pose problems, these horror stories only make up 1 percent of the whole."

The scientists did find categorization problems with nearly half of the plant and animal species they surveyed.

Rieseberg and his co-authors, doctoral student Troy Wood and postdoctoral research associate Eric Baack, examined hundreds of peer-reviewed papers reporting the measurement of various plant and animal characteristics, or reporting on the success or failure of hybridization of plant and animal species with similar species. The scientists culled the papers for information, grouped and combined data for each given species, and then looked at how often characteristics clustered in accordance with named species.

The scientists found that while real, quantifiable clusters did exist in most groups of plants and animals, the one-to-one correspondence of species names and character clusters was quite low -- about 54 percent. One explanation for this, Rieseberg said, is that too many taxonomists are "splitters" -- they give too many species names to a single group of related organisms.

The hybridization of animal species is often portrayed as rare and strange, or else the result of human-forced matings, as is the case with ligers (lion-tiger hybrids) and mules (horse-ass hybrids). It is not common knowledge that many bird and fish species successfully hybridize in the wild. The scientists found that birds were most likely to produce fertile hybrids when crossed with other bird species. Ferns, of all things, were least likely to generate fertile hybrids.

Many of the hybridization papers that Rieseberg, Wood and Baack looked at reported crossings under laboratory conditions, and therefore the crossings may not accurately represent what happens in nature. For example, two species that can hybridize may not actually do so, perhaps because they exist on different continents or because they prefer to mate with members of their own species. For that reason, the percentages of plant and animal species that hybridize in the wild are likely to be lower than those reported by the scientists.

The Nature study is meant to address gaps in scientists' knowledge in two areas: the fundamental nature of species and the divisibility of plant and animal species using commonly accepted definitions of species. Debates in both areas began with the 1859 edition of Darwin's Origin of Species, and they have not yet been settled.

"These discussions should have been settled earlier, but no one bothered to summarize the relevant literature, perhaps because it is so vast," Rieseberg said.

Over the past 50 years, numerous scientific papers have been published in which species are categorized by statistical analysis of observable traits (i.e., numerical taxonomy) and/or by the ease with which species can be hybridized (i.e., breeding studies). "After going through all this literature, we realized someone just needed to compile and analyze it all," Rieseberg said.

The scientists decided to use the mass of data to see whether taxonomists were doing a good job, and whether cross-species mating in the plant kingdom is especially likely to be successful.

"The species concept debate has devolved from an empirical discussion into a philosophical one," Rieseberg said. "But this is fundamentally an empirical question. These data support the notion that species can be both units of evolution and products of evolution."

Rieseberg holds the Class of '54 Chair and is a distinguished professor of biology at IU Bloomington. Troy Wood and Eric Baack also contributed to the report. It was funded primarily by a Guggenheim Fellowship grant. Supplementary support came from the MacArthur Foundation, the National Institutes of Health and the National Science Foundation.