Doctors and Nurses Work Together to Get Tonsillectomy Patients Home Faster 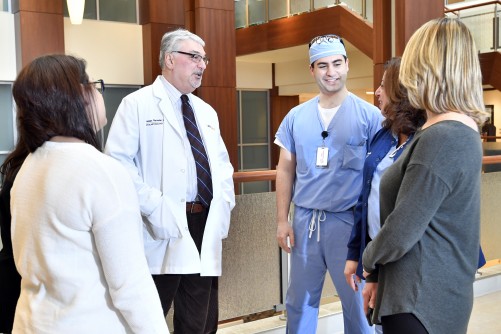 WVU School of Medicine resident Habib Zalzal (third from right) talks with Hassan Ramadan, chair of WVU's Department of Otolaryngology, Head and Neck Surgery (fourth from right), and other members of his research team. The team's research suggests that tonsillectomy patients can often be discharged sooner than hospital-mandated timeframes may require. The project earned Zalzal the G. Slaughter Fitz-Hugh Research Award for the southern region of the Triological Society.

MORGANTOWN, W.Va.—After having their tonsils removed, patients often can’t leave the hospital for six hours, even if they bounce back from surgery sooner. Hospital policy commonly mandates a six-hour recovery time. But research led by Habib Zalzal, a resident in the West Virginia University School of Medicine, suggests that not all tonsillectomy patients have to wait that long.

The project earned him the G. Slaughter Fitz-Hugh Research Award for the southern region of the Triological Society, a national society for ear, nose and throat surgeons.

“Our nursing staff always felt that some children could be discharged way before the six-hour arbitrary, mandatory timeframe based on how the kids were doing,” said Hassan Ramadan, a member of Zalzal’s research team and chair of the Department of Otolaryngology, Head and Neck Surgery. “After checking with half a dozen children’s hospitals in our region, none of them had any validated criteria.”

To fill this knowledge gap, Zalzal and his team established discharge criteria based on how well the patient could eat, how easily they could breathe, and how stable their pulse and blood pressure were. Then the team investigated whether discharging patients based on those criteria—and not on a universal timeframe—would shorten postoperative periods without jeopardizing patients’ recovery.

They found that no timeframe was required. More than 80 percent of patients could have been discharged earlier than four hours following surgery, and they were no more likely to have complications than patients forced to stay six hours.

“In some cases, we had patients who were eating lunch and dinner, but they couldn’t leave because they had to wait six hours,” Zalzal said. “We say, if you have any questions, give us a call, but we’re not going to handcuff you to the bed.”

According to Zalzal, getting patients home faster shrinks the financial cost associated with monitoring them, reduces their risk of hospital-acquired infections and lightens the burden on healthcare staff who have to track their vital signs.

“Although all surgery has potential complications, this study demonstrated that registered nurses working in perianesthesia phase II recovery could safely determine discharge readiness using clinical indicators,” said Aletha Rowlands, a clinical associate professor in the WVU School of Nursing and member of the research team.

The findings may lead hospitals to take a more individualized approach to tonsillectomy recovery. Given that tonsillectomy is one of the most common surgeries children in the U.S. undergo, second only to getting ear tubes, such a change could have a broad impact.