1-Sep-2022 8:05 AM EDT, by Russian Foundation for Basic Research
favorite_border 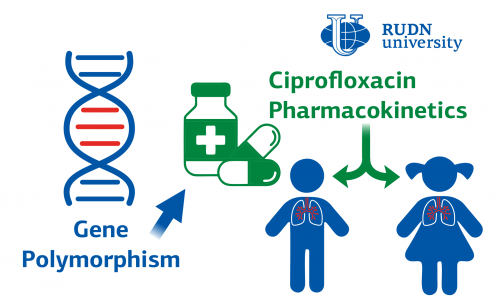 RUDN doctors in collaboration with the Research Centre for Medical Genetics found genetic factors that can affect the absorption of an antimicrobial drug prescribed for cystic fibrosis in children. Ciprofloxacin is widely used to treat even the smallest patients. New data will help develop a more accurate protocol for the treatment of cystic fibrosis in children. The results are published in Biomedicines.

Cystic fibrosis is a hereditary disease that affects the secretion glands. The secreted mucus turns out to be too viscous, and this critically disrupts the functioning of the respiratory and digestive organs. To prevent the development of bacterial infections in the respiratory tract, patients with cystic fibrosis are prescribed ciprofloxacin. That include even children, although the pharmacokinetics (the processes of absorption, distribution, metabolism and excretion) of the drug in this group have been little studied. Physicians from RUDN University and Research and Clinical Cystic Fibrosis Department of Research Centre for Medical Genetics found that the absorption of the drug in children can be influenced by genetic factors.

“Cystic fibrosis is one of the most common genetic diseases. For its treatment, ciprofloxacin is officially allowed if patients older than 5 years. But in real clinical practice, this drug is prescribed to patients under five. Despite the fact that the indications for use are expanding, and the age threshold is decreasing, there is still little information on the pharmacokinetics of ciprofloxacin. This makes it difficult to develop a clear therapeutic algorithm for children,” said Sergey Zyryanov, Professor, Doctor of Medicine, Head of the Department of General Clinical Pharmacology at RUDN University.

Doctors examined 33 patients aged 2 to 18 years, 8 of them under the age of five. All of them received ciprofloxacin. Before taking the medicine and every hour and a half an hour after that, doctors took a blood test. Chromatography was used to measure the concentration of the drug in the blood serum.

The pharmacokinetics of ciprofloxacin was associated with the CYP2C9 gene, which is involved in metabolism. One of the possible modifications of this gene (GCLC 7/7) correlates with an increased concentration of the drug in the blood. This may indicate that for patients with this gene modification, ciprofloxacin is more effective than for others - the drug is absorbed better.

“We found a significant relationship between GCLC 7/7 genotype and high ciprofloxacin levels 7.5 hours post-dose. The elevated concentrations of ciprofloxacin contribute to an increase in its therapeutic efficacy,” said Olga Butranova, PhD, Associate Professor of the Department of General Clinical Pharmacology at RUDN University.