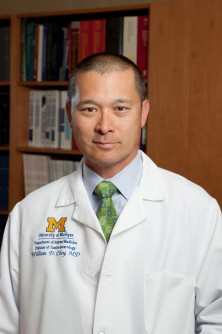 Newswise — ANN ARBOR, Mich. – Gastroenterologists often recommend over-the-counter medicines for acid reflux and chronic constipation but doctors may be missing the opportunity to save their patients money.

Investigators at the University of Michigan Health System surveyed gastroenterologists about their prescribing tendencies and use of OTC meds for acid reflux and chronic constipation. Survey results were presented Saturday during Digestive Diseases Week 2014 in Chicago.

A similar prescribing trend was found in gastroenterologists’ beliefs about the use of OTC medicines for gastroesophageal reflux disease (GERD). A large and growing group of Americans have heartburn or other symptoms of acid reflux at least weekly.

In the survey, three-fourths of doctors felt that store brands and name-brand proton pump inhibitors were bioequivalent, meaning they had the same active ingredients and ability to suppress gastric acid. The FDA requires generic drugs have the same high quality, strength, purity and stability as brand-name drugs.

Still 54 percent of doctors recommended patients use a branded medicine at least one-third of the time.

“At a time when doctors are highly constrained in their use of prescription medicines for so-called lifestyle conditions like GERD and constipation, treatment of these conditions is going to shift more and more to the OTC space,” says Chey. “As a result, it will become important for doctors to reflect on their OTC treatment recommendations – especially for the cost-conscious patient,” he says.

More than 800 gastroenterologists across the United States responded to the survey supported with funding from Perrigo, a manufacturer of generic medications.

Approach to treatmentChronic constipation is a painful and frustrating problem for more than 63 million Americans. For a typical patient, 95 percent of gastroenterologists surveyed recommended OTC treatments including fiber supplements, osmotics and stool softeners.

When confronted with a patient who failed to improve with first-line therapy, 70 percent of gastroenterologists still recommended an OTC treatment as a second option. Few doctors surveyed would write a prescription as a second-line therapy.

When recommending an OTC medicine, generally gastroenterologists were unaware of the cost savings of store brands. Less than one-third of physicians realized that generics can be more than 20 percent cheaper than brand name medicines, according to the survey.

Experienced doctors who’d been in practice 20 years or more were more likely to steer patients to generics than younger doctors.

Learn ways to treat constipation from the University of Michigan Bowel Control Program.