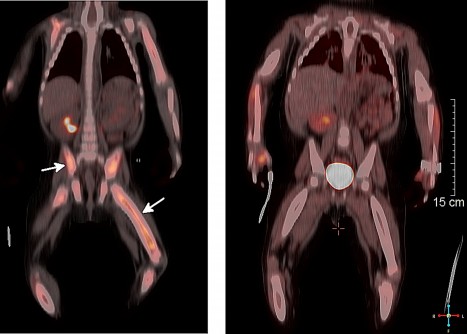 PET-CT images of a 10-month-old child with Langerhans cell histiocytosis (LCH) show increased disease activity in the bones (left image). Three months after the start of oral therapy with the drug dabrafenib, the image on the right shows near complete resolution of disease activity. The child was part of a study in JCI Insight from Cincinnati Children’s summarizing outcomes of off-label oral therapy in patients with histiocytoses that were resistant to chemotherapy. Study authors recommend additional study, including clinical trials to further test the therapeutic approach.

Researchers from the Cincinnati Children’s Cancer and Blood Diseases Institute report their data in Journal of Clinical Investigation Insight (JCI Insight). They recommend the regular use of comprehensive genomic profiling at diagnosis to positively impact clinical care, as well as rigorous clinical trials to verify and extend the diagnostic and treatment conclusions in their study.

Histiocytoses are a group of disorders in which abnormal accumulations of white blood cells form tumors on vital organs, leading to systemic organ damage or death. About half of the patients can be treated successfully with chemotherapy, but others are treatment resistant.

Study authors conducted genomic profiling of biopsies from 72 child and adult patients with a variety of treatment-resistant histiocytoses, including the most common one in children, Langerhans cell histiocytosis (LCH), according to the lead investigator, Ashish Kumar, MD, PhD.

Twenty-six patients with treatment-resistant disease had gene mutations involving either BRAF or MAP2K1 that directly activate the MAP-kinase cancer pathway. Researchers determined such patients would benefit from the targeted molecular therapies dabrafenib or trametinib, which block the MAP kinase pathway. The approved cancer drugs were prescribed off label to the histiocytosis patients.

"In the last year, three patients we treated were infants with disease that was resistant to several rounds of intense chemotherapy. In the past, these children either would have suffered serious complications including death or would have had to endure more intensive treatments and the ensuing toxicities, including the risk of death,” Kumar said. “All three are thriving now on one oral medication that put their disease into remission.”

In their JCI Insight paper, the researchers also offer detailed case summaries involving four histiocytosis patients between the ages of 9 months and 36 years.

In one case a 22-month-old child was referred to Cincinnati Children’s for treatment-resistant LCH that was complicated by a secondary diagnosis of HLH (hemophagocytic lymphohistiocytosis). HLH is a difficult-to-treat and often-fatal autoimmune disorder in which an overheated immune system causes uncontrolled inflammation and organ damage. The little girl, whose condition was worsening with organ failure, had a mutation in the BRAF gene.

Two days after starting targeted treatment with oral dabrafenib (which blocks the MAP-kinase pathway) the little girl’s fever disappeared and a week later her organ function returned to normal, according to study authors.

For their JCI Insight research project, in addition to their own laboratory tests, study authors drew from data in previous research papers by a number of institutions, which examined genetic and molecular processes affecting white blood cell expansion in different types of histiocytosis.

As Kumar and his colleagues continue their research, they plan to test methodologies that could expand the use of genomic profiling of patient biopsies and targeted molecular therapies in more patients with recurrent, treatment-resistant disease.

“It’s important for physicians and patients to know that LCH and other forms of histiocytosis are not that mysterious anymore,” Kumar said. “We now have new treatments that dramatically improve outcomes for these patients.”

The JCI Insight study is a collaborative effort of investigators in several divisions at Cincinnati Children’s, including first author and oncologist Lynn H. Lee, MD. Kumar is a member of the Division of Bone Marrow Transplant and Immune Deficiency and director of the Langerhans Cell Histiocytosis Center at Cincinnati Children’s.

Funding support for the research came from the National Heart, Lung, and Blood Institute (R01-HL111192) and the Leukemia and Lymphoma Society (TRP-6076-14).