More than 61,000 pages of the Hill Air Force Base newspapers, covering the period 1943 to 2006, have been digitized by the library’s Digital Library Services Department and are available to the public.

Hill Air Force Base’s history is the stuff of legend, and it was the Hilltop Times that reported it all. The first issue of the official base newspaper, published on Jan. 1, 1943, states: “We exist to win the war and everything is subordinated to this dominant purpose.”

Hill Air Force Base was founded shortly before the U.S. entry into World War II, and it went on to serve a critical maintenance and supply role. The bombers that defeated the Axis Powers in World War II — the B-29, B-25, B-24 and B-17 — were repaired, modified or maintained in some way at Hill Air Force Base. The captain of the Enola Gay prepared for his mission at Wendover Air Base, with the assistance of Hill Air Force Base. Every Minuteman Intercontinental Ballistic Missile in the Air Force arsenal was built there. It was the first base to operationally fly the F-16 and F-35 fighters. The responsibility of Hill Air Force Base encompasses the largest block of contiguous overland, special-use airspace in the continental U.S., and its founding forever altered the physical and demographic landscape of Northern Utah.

According to Hill Aerospace Museum Director Aaron Clark, if it weren’t for Hill Field, “damaged B-24s, B-25s and B-17s could not have been returned to the war and [the U.S.] could not have carried on fighting.”

What's extraordinary about the Hilltop Times is how carefully it has been preserved on base, said Tina Kirkham, digital library project manager.

“Every page of every issue is available in the base's archive, which also houses some 50,000 original photographs covering the building of the base and the history of aviation in Utah,” Kirkham said. “Hill Air Force Base's History Office is a tremendous resource."

A key advantage of newspaper digitization is the speed with which researchers can find information within the more than 70,000 newspaper pages published since 1943.

For example, an intern recently was doing research on the B-1 aircraft using the digitized newspapers, said Clark.

“In a matter of seconds, we were able to find over 32 references to B-1 work that occurred on this base,” Clark said. In contrast, working from print or microfilm, Clark estimates it would take “a couple of months” to uncover the same information.

Clark recalled a current Hill Air Force Base employee whose grandfather was employed on base during World War II. This individual wanted to understand what his grandfather had contributed to the war effort, but the man’s peers had passed away or were unable to remember. The employee began combing through the more than 35 volumes of bound, printed newspapers stored in the archives, but after several weeks, he hadn’t found anything. However, within 15 minutes of searching the Utah Digital Newspapers web site, he had discovered that his grandfather worked at the base lumberyard. He also found articles written by his uncle during the Cold War era.

“He learned about his family and the contributions they made,” Clark said. “It was pretty emotional for him.”

Historical newspapers are often preserved in print or on microfilm, Kirkham said. However, “digitization of newspapers vastly expands their usefulness. The software used enables the full text of every issue to be keyword-searchable — allowing the public to use a Google-like search to uncover thousands of articles that mention a person, place or topic. What a boon for genealogists and other researchers!"

For more information about the Utah Digital Newspapers program and online access to the Hilltop Times, contact Tina Kirkham at the Marriott Library ([email protected]).

The Utah Digital Newspaperssite now contains 2.4 million pages dating back to 1850. Although that seems like a high number, it represents only around 10 percent of all newspaper content published in Utah throughout its history. The Marriott Library is actively adding more newspapers to the site. Interested parties are encouraged to contact the library for information about how to participate. Utah Digital Newspapers is freely available to anyone with internet access. There are no subscriptions or use fees.

Hill Aerospace Museumis located adjacent to the base, just off I-15, five miles south of Ogden. Opened in 1984, it hosts 265,000 visitors a year and displays over 4,000 objects, including aircraft, military vehicles, missiles, ordnance and artwork. Its exhibits bring together a particular aircraft along with the armor, jeeps, tents, uniforms and equipment its crew would have used. 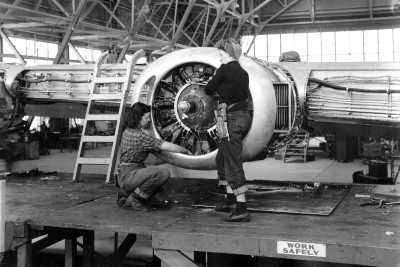 Caption: During World War II, thousands of “Rosie the Riveters” repaired aircraft and other equipment. Women made up half of the work force at air depots like Hill Field. These employees are working on a B-24. 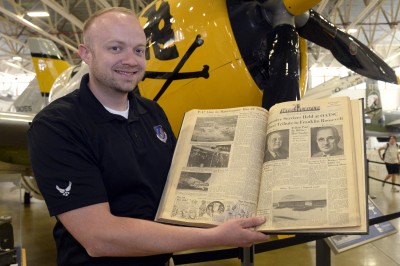 Caption: Aaron Clark, director of the Hill Aerospace Museum, holds an early volume of the base newspaper, then called The Hillfielder. The date of the paper is April 19, 1945, and it covers the death of Franklin D. Roosevelt and the swearing-in of Harry Truman. 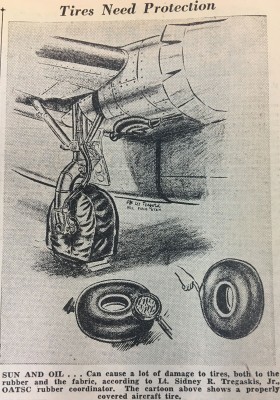