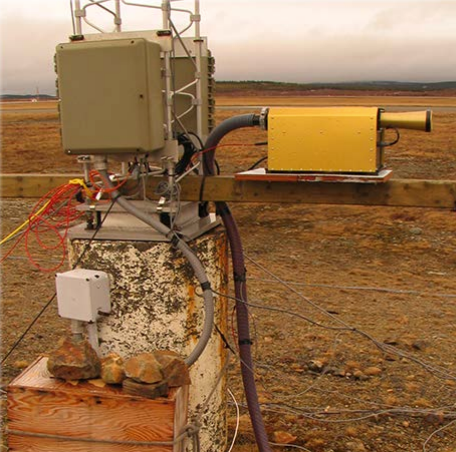 Image of an FM-120 Fog Detector in a field setting

The study associated with the grant aims to learn more about the processes that lead to advective fog events along coastal California and to conduct field tests to determine the efficiencies of the mesh-based devices used worldwide to collect water as a function of different environmental conditions.

The new devices funded by the grant will support Fernandez, who holds a doctorate of philosophy in electrical engineering, in his current fog water collection research and will help to both measure and increase the amount of water collected from fog capture.

“I am thrilled to have received this support to enhance our current research efforts. We live in a region where coastal fog is an important aspect of our place. It makes sense that this effort is taking place here and that it can also involve our students who then get to experience the fog both personally, while attending CSUMB, and by participating in state-of-the-art research involving fog,” said Fernandez. “This grant will allow the purchase of several top-of the-line instruments. We will be buying two FM-120 fog droplet measurement devices. There are only 106 of these so far worldwide and they provide an unprecedented measurement of fog characteristics that will bring the research into fog that we do at CSUMB to an entirely new level.”

The research has several facets that draw broad community interest, including that of the DoD. The first is that fog collection can produce usable water for drinking or irrigation, which may be particularly useful for people, including military personnel, in remote foggy regions or areas that lack access to water. The second aspect is that this research aims to expand knowledge about the generation and dissipation of fog.

This information is critically important for airports and other locations where fog density can adversely affect transportation and other activities. It can also provide insight on the phenomena associated with both the development and dissipation of clouds.

"The presence of fog affects visibility and can impact Army operations,” said Julia Barzyk, who holds a doctorate of philosophy in geophysical sciences and is the program manager for Earth Materials and Processes at the Army Research Office. “We are excited that this award will enable the science needed to mitigate those effects as well as provide opportunities to develop the next generation of scientists."

Fernandez has been involved in fog water collection since 2005. His work has integrated over 50 undergraduate students and two graduate students since he began, and his group has deployed research-grade standard fog collectors at over 25 sites throughout California. He has presented at dozens of conferences and other public presentations and has authored or co-authored 10 different conference or journal papers related to the topic of fog water collection.