‘Dolphin Speaker’ to Enhance Study of Dolphin Vocalizations and Acoustics 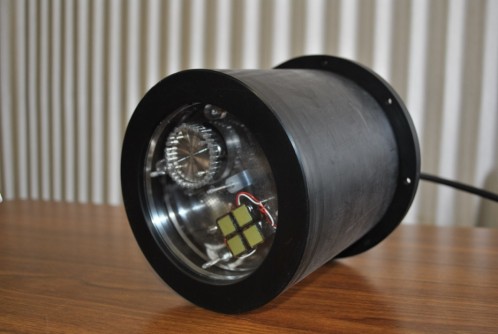 Newswise — Dolphins rely on the combination of a variety of vocalizations and vastly better acoustic abilities than humans to communicate with each other or to detect their surroundings and prey in the dark sea. To gain new insights into how dolphins communicate, researchers in Japan created a prototype of an extremely broadband “dolphin speaker” capable of projecting dolphins’ communication sounds, whistles, burst-pulse sounds, as well as detection sounds such as echolocation clicks.

Yuka Mishima, a graduate student at Tokyo University of Marine Science and Technology, along with university colleagues and collaborators at Fusion Inc., will present their research at the Acoustics 2012 meeting in Hong Kong, May 13-18, a joint meeting of the Acoustical Society of America (ASA), Acoustical Society of China, Western Pacific Acoustics Conference, and the Hong Kong Institute of Acoustics.

“Acoustic studies of dolphins that have been done so far focus mainly on recordings of vocalizations and hearing abilities, but relatively few playback experiments have been conducted,” explains Mishima. “There were no speakers that could project from low to high frequencies like dolphins, although some could project the low-frequency sounds or parts of dolphin sounds.”

Since playback experiments are a very important part of gaining a better understanding of dolphins’ communication and detection abilities, the researchers decided to create their own “dolphin speaker.”

“Our goal was to develop a dolphin speaker that could project the full range of all of the sounds dolphins make,” Mishima says. “We succeeded in developing a prototype broadband transducer for an echosounder last year by using new types of piezoelectric elements that had never been used for underwater acoustic transducers.”

They applied this technique to their dolphin speaker prototype, and it can now project sounds in the 7 to 170 kHz range.

“The next step is to faithfully playback the original sounds of the dolphins by using the dolphin speaker. Once the dolphin speaker is completed it will enable us to playback a variety of dolphin sounds to dolphins, which will help to broaden the research of their acoustic abilities,” notes Mishima.

The 163rd Meeting of the Acoustical Society of America (ASA) will feature more than 1,300 presentations on the science of sound and its impact on physics, engineering, and medicine. This international acoustics meeting will be held jointly with the 8th Meeting of the Acoustical Society of China and the 11th Western Pacific Acoustics Conference. It is organized by the Hong Kong Institute of Acoustics and will take place May 13-18, 2012, at the Hong Kong Convention and Exhibition Centre. MORE INFORMATION ABOUT THE 163rd ASA MEETING

WORLD WIDE PRESS ROOMASA's World Wide Press Room (www.acoustics.org/press) will contain additional tips on newsworthy stories and lay-language papers, which are 300-1200 word summaries of presentations written by scientists for a general audience and accompanied by photos, audio, and video.

This news release was prepared for the Acoustical Society of America (ASA) by the American Institute of Physics (AIP).

ABOUT THE ACOUSTICAL SOCIETY OF AMERICA The Acoustical Society of America (ASA) is the premier international scientific society in acoustics devoted to the science and technology of sound. Its 7,000 members worldwide represent a broad spectrum of the study of acoustics. ASA publications include The Journal of the Acoustical Society of America (the world's leading journal on acoustics), Acoustics Today magazine, ECHOES newsletter, books, and standards on acoustics. The society also holds two major scientific meetings each year. For more information about ASA, visit our website at http://www.acousticalsociety.org.