Lymphatic vessels “play on both teams,” enabling both metastasis and T-cell invasion 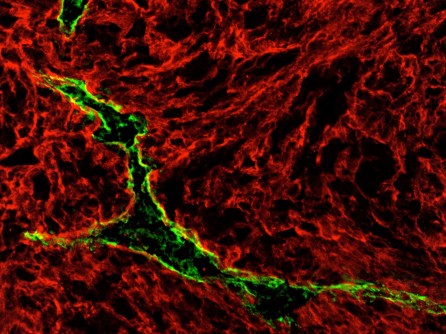 Newswise — In a surprise finding, an international research team from the University of Chicago, the University of Lausanne, and the Swiss Federal Institute of Technology in Lausanne has discovered that the lymphatic vessels, often blamed for enabling cancer cells to spread from a primary location to many other sites, have a flip side.

Lymphatics can expand around and into a tumor – a process known as lymphangiogenesis. This process has long been associated with a cancer’s ability to spread to new locations.

But a team led by Melody Swartz, PhD, the William B. Ogden Professor in Molecular Engineering at the University of Chicago, found that in patients being treated with checkpoint inhibitors – drugs such as ipilimumab or nivolumab that help activate an immune response against the tumor – lymphangiogenesis can strongly enhance the effects of cancer immunotherapy. It boosts the immune system’s primary anti-cancer tool, T cells, enabling them to infiltrate tumors and kill cancer cells.

The study, piloted by first authors Manuel Fankhauser and Maria Broggi and published in the 13 September, 2017, issue of Science Translational Medicine, suggests that physicians may predict – with a simple blood test before starting treatment – which patients are most likely to benefit from cancer immunotherapy, at least in melanoma patients. Currently, only a minority of patients actually benefit from such therapies. Moreover, it has the potential to lead to new therapeutic strategies to make cancer immunotherapy more effective for more patients.

“Our study presents a completely unexpected role for the lymphatic system in cancer therapy,” explained Swartz.

Lymphangiogenesis is driven in part by a chemical messenger, vascular endothelial growth factor-C (VEGF-C), which has long been associated with metastasis and poor patient prognosis, and can also promote immune suppression in the tumor microenvironment.

“VEGF-C was always considered bad for cancer patients,” Swartz said. “We thought that blocking VEGF-C would help boost immunotherapy by removing some factors that suppress the abilities of T cells to kill tumor cells. That was our original hypothesis.” But their studies in mice, followed by human data obtained from two clinical trials for melanoma patients, changed their thinking.

“It was exciting to get such surprising results,” Swartz said. “And the translational implications are even more exciting than if our hypothesis had been correct.”

In both trials, the results showed that VEGF-C levels in the blood before immunotherapy “not only predicts the magnitude and quality of immune responses raised by a cancer vaccine but also stratifies long-term patient responses to combined checkpoint blockade and further strengthens the case for investigating the use of serum VEGF-C as a predictive biomarker for immunotherapy candidates,” the authors wrote.

“Before the trials began, we took blood samples,” Swartz said. “We measured dozens of factors, but nothing else correlated, not VEGF-A, VEGF-D or other growth factors, only VEGF-C.”

“The difference was really striking,” Swartz said. Almost all of the patients with higher than average VEGF-C levels in their blood responded to immunotherapy. This not only resulted in eradication of the primary tumors, it also encouraged T cell infiltration into metastatic tumors and resulted in long-term protection.

This could become a useful biomarker, Swartz suggested. “It’s easy to measure from a blood sample. And it can predict who is likely to respond. If VEGF-C is low, immunotherapy is much less likely to be effective.”

The authors noted several limitations, including the potential effects of VEGF-C on other immune cell subsets, the contributions of other cytokines and competition with other T cells for nutrients. Despite those limitations, this study “brings into focus a more comprehensive understanding of the immune microenvironment,” Swartz said.

“We now appreciate the numerous mechanisms of immunosuppression that a T cell-inflamed tumor develops to survive, including lymphangiogenesis,” the authors conclude. “But when the scales are tipped toward activating factors dominating over suppressive ones, as is the case with immunotherapy, these T cells become robust participants in antitumor immunity.”

The study was funded by the Swiss National Science Foundation, the European Research Council, SwissTransMed, and Fonds Pierre-François Vittone.