Machine learning key to discovery of over 1200 gravitational lenses 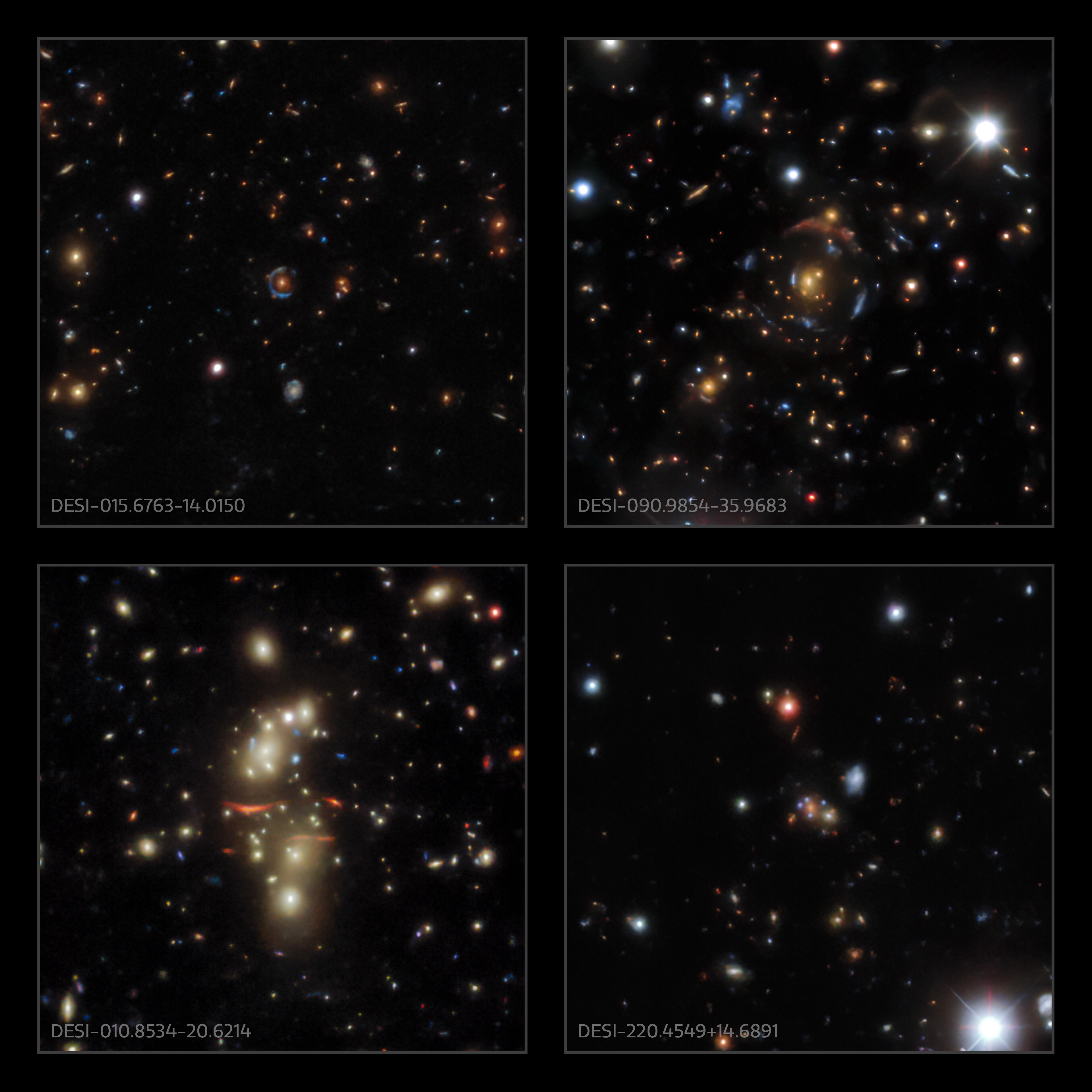 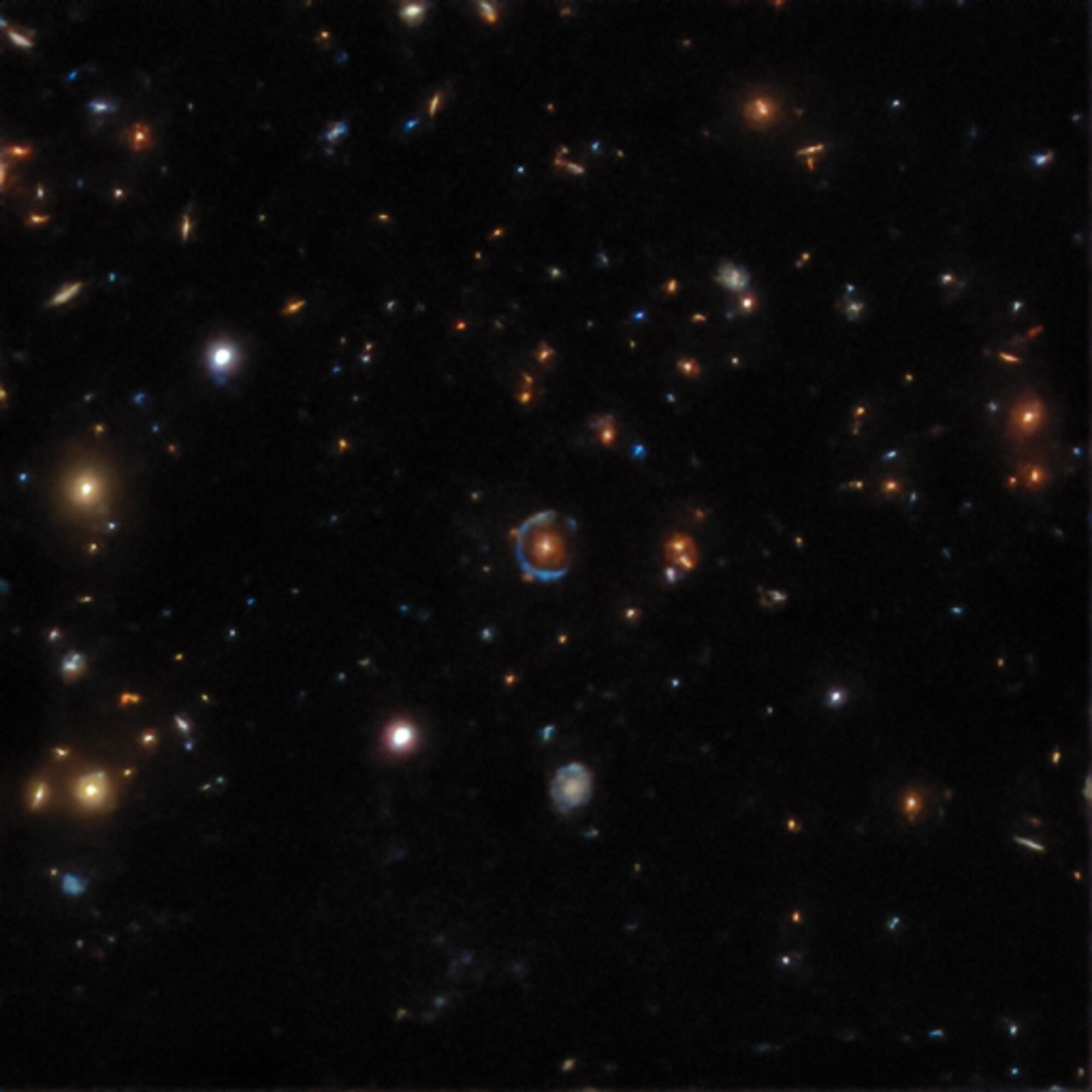 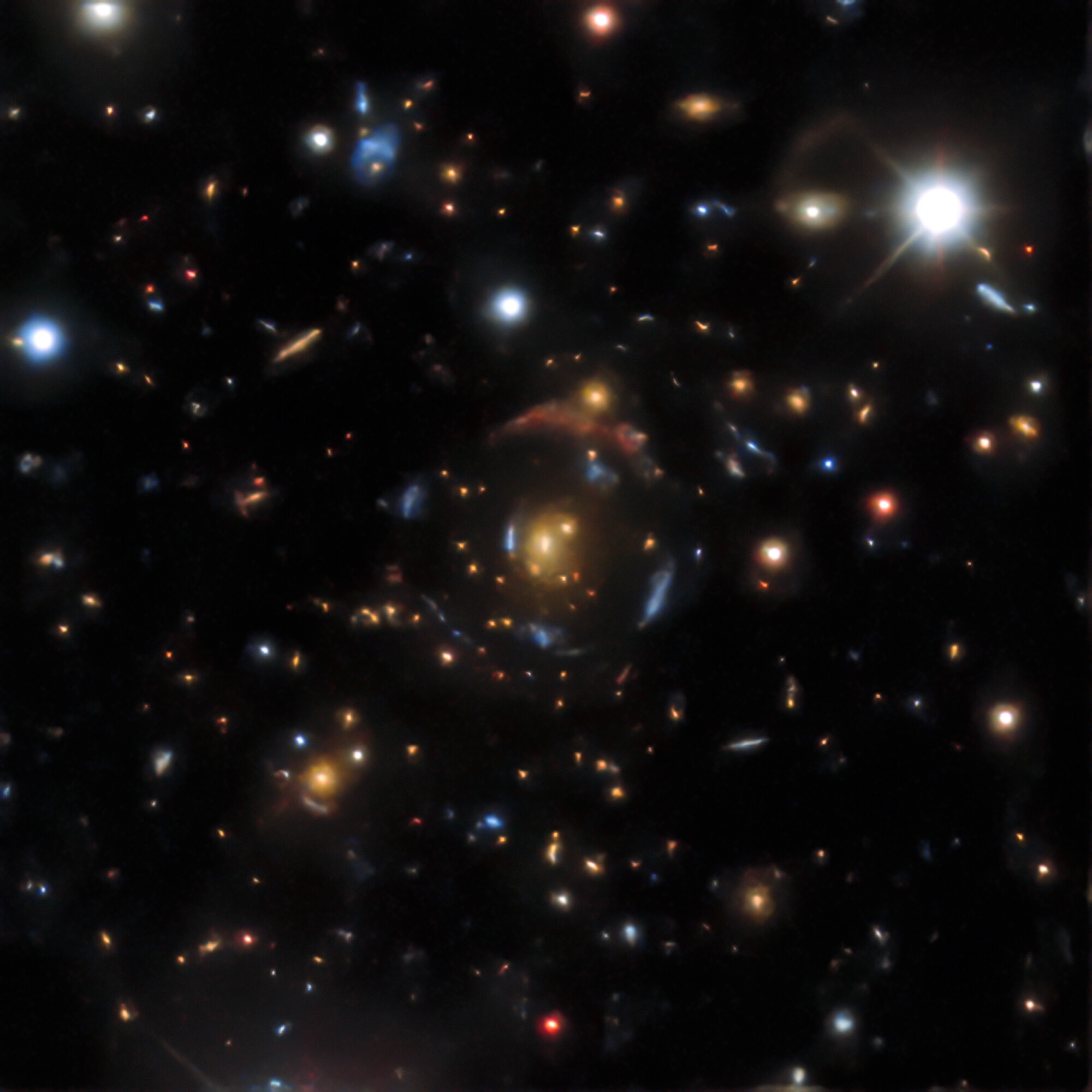 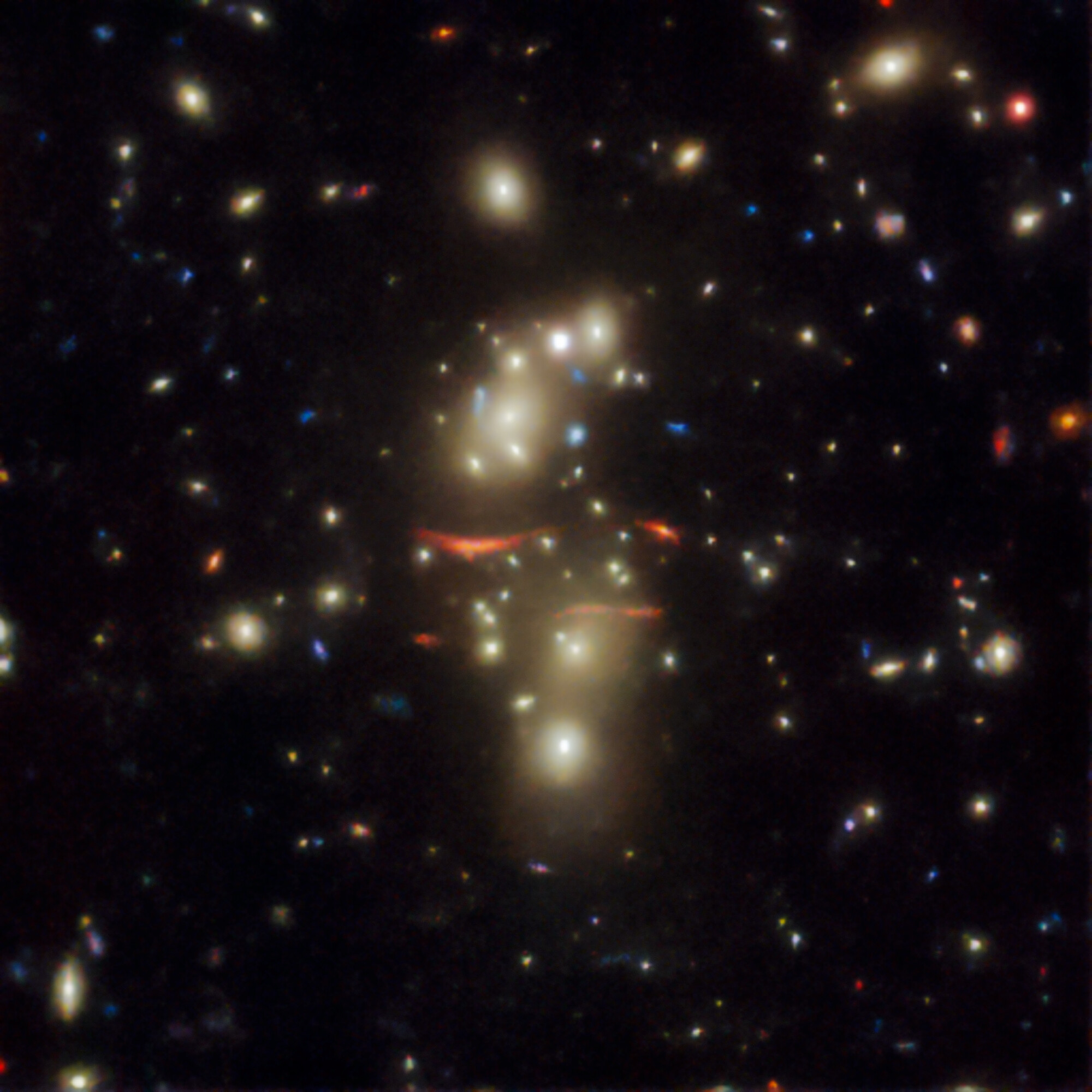 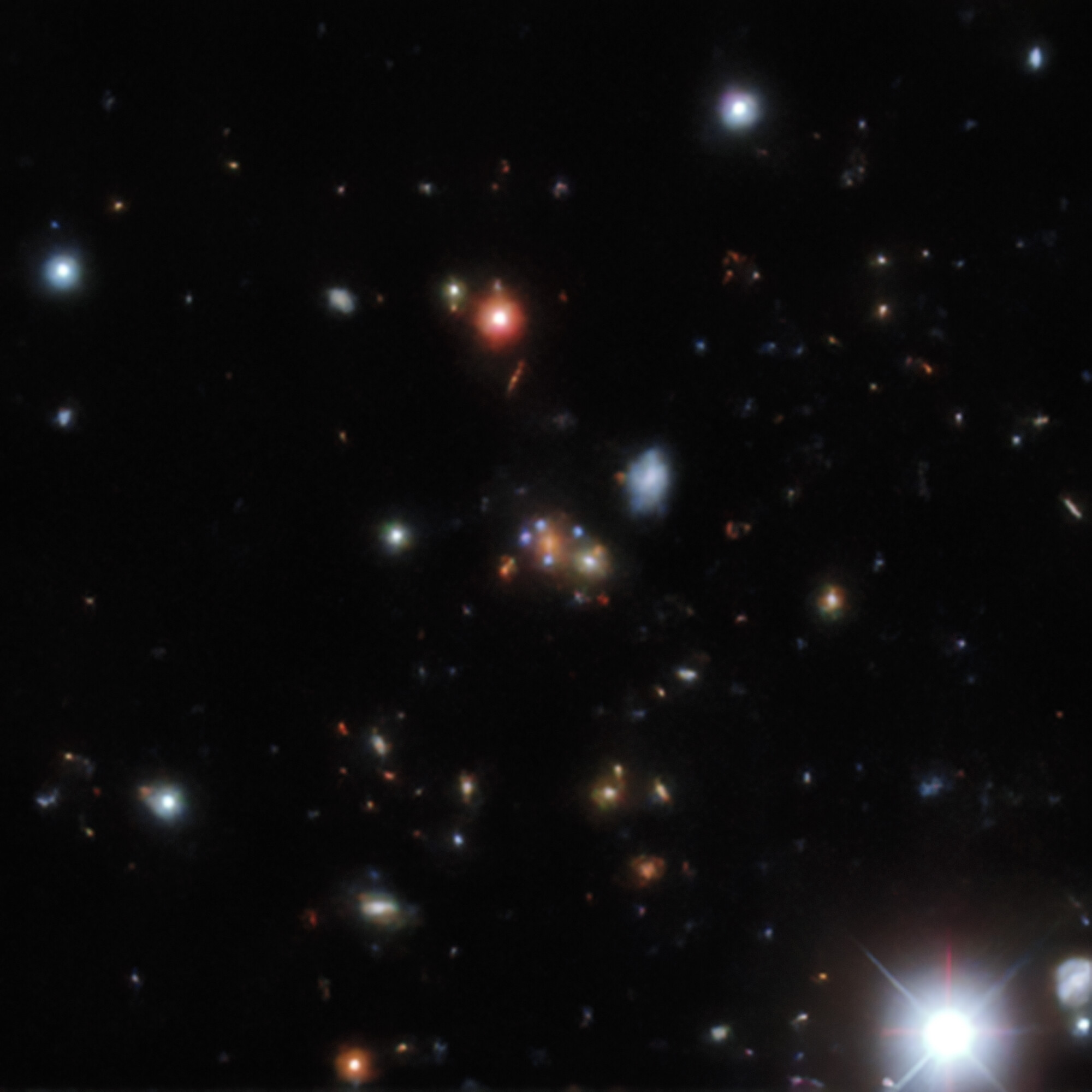 Discussed in scientific journals since the 1930s, gravitational lenses are products of Einstein’s General Theory of Relativity. The theory says that a massive object, such as a cluster of galaxies, can warp spacetime. Some scientists, including Einstein, predicted that this warping of spacetime might be observable, as a stretching and distortion of the light from a background galaxy by a foreground cluster of galaxies. The lenses typically appear in images as arcs and streaks around foreground galaxies and galaxy clusters.

Only 1 in 10,000 massive galaxies are expected to show evidence of strong gravitational lensing [1], and locating them is not easy. Gravitational lenses allow astronomers to explore the most profound questions of our Universe, including the nature of dark matter and the value of the Hubble constant, which defines the expansion of the Universe. A major limitation of the use of gravitational lenses until now has been the small number of them known.

“A massive galaxy warps the spacetime around it, but usually you don't notice this effect. Only when a galaxy is hidden directly behind a giant galaxy is a lens possible to see,” notes the lead author of the study, Xiaosheng Huang from the University of San Francisco. “When we started this project in 2018, there were only about 300 confirmed strong lenses.”

“As a co-leader in the DESI Legacy Surveys I realized this would be the perfect dataset to search for gravitational lenses,” explains study co-author David Schlegel of Lawrence Berkeley National Laboratory (LBNL). “My colleague Huang had just finished teaching an undergraduate class on machine learning at the University of San Francisco, and together we realized this was a perfect opportunity to apply those techniques to a search for gravitational lenses.”

The lensing study was possible because of the availability of science-ready data from the DESI Legacy Imaging Surveys, which were conducted to identify targets for DESI’s operations, and from which the ninth and final dataset has just been released. These surveys comprise a unique blend of three projects that have observed a third of the night sky: the Dark Energy Camera Legacy Survey (DECaLS), observed by the Dark Energy Camera (DECam) on the Víctor M. Blanco 4-meter Telescope at CTIO in Chile; the Mayall z-band Legacy Survey (MzLS) [2], by the Mosaic3 camera on the Nicholas U. Mayall 4-meter Telescope at KPNO; and the Beijing-Arizona Sky Survey (BASS) by the 90Prime camera on the Bok 2.3-meter Telescope, which is owned and operated by the University of Arizona and located at KPNO.

“We designed the Legacy Surveys imaging project from the ground up as a public enterprise, so that it could be used by any scientist,” said study co-author Arjun Dey, from NSF’s NOIRLab. “Our survey has already yielded more than a thousand new gravitational lenses, and there are undoubtedly many more awaiting discovery.

The DESI Legacy Imaging Surveys data are served to the astronomical community via the Astro Data Lab at NOIRLab’s Community Science and Data Center (CSDC). “Providing science-ready datasets for discovery and exploration is core to our mission,” said CSDC Director Adam Bolton. “The DESI Legacy Imaging Surveys is a key resource that can be used for years to come by the astronomy community for investigations like these.”

To analyze the data, Huang and team used the National Energy Research Scientific Computer Center’s (NERSC) supercomputer at Berkeley Lab. “The DESI Legacy Imaging Surveys were absolutely crucial to this study; not just the telescopes, instruments, and facilities but also data reduction and source extraction,” explains Huang. “The combination of the breadth and depth of the observations is unparalleled.”

With the huge amount of science-ready data to work through, the researchers turned to a kind of machine learning known as a deep residual neural net. Neural nets are computing algorithms that are somewhat comparable to a human brain and are used for solving artificial intelligence problems. Deep neural nets have many layers that collectively can decide whether a candidate object belongs to a particular group. In order to be able to do this, however, the neural nets have to be trained to recognize the objects in question [3].

With the large number of lens candidates now on hand, researchers can make new measurements of cosmological parameters such as the Hubble constant. The key will be to detect a supernova in the background galaxy, which, when lensed by a foreground galaxy, will appear as multiple points of light. Now that astronomers know which galaxies show evidence for strong lensing, they know where to search. New facilities such as the Vera C. Rubin Observatory (currently under construction in Chile and operated by NOIRLab) will monitor objects like these as part of its mission, allowing any supernova to be measured rapidly by other telescopes.

Undergraduate students played a significant role in the project from its beginning. University of California student Andi Gu said, “My role on the project has helped me develop several skills which I believe to be key for my future academic career.”

[1] Strong gravitational lenses are those where the effect is easily visible in the form of arcs or Einstein Rings.

[2] z-band means the data were taken in the infrared, centered on a wavelength of 900 nm.

[3] As an example, imagine trying to train a human who has never seen the night sky how to recognize a star. You would have to describe certain characteristics: it is small, it is bright, it is on a dark background. But immediately there are challenges. What if several stars are close together? What if the sky is a bit cloudy? What if the object is blinking (so is not a star at all, but a plane)? It quickly becomes clear that defining a clear set of rules to describe an object is actually very difficult. However, any human who has seen the night sky will simply be able to recognize other stars once they have seen them. This is the sort of thing that humans are very good at, and computers are very bad at. Hence the necessity to train highly sophisticated neural nets to recognize the desired objects.

This research was presented in the paper Discovering New Strong Gravitational Lenses in the DESI Legacy Imaging Surveys to appear in The Astrophysical Journal.

DESI is supported by the US Department of Energy’s Office of High Energy Physics; the US National Science Foundation, Division of Astronomical Sciences under contract to the NSF’s NOIRLab; the Science and Technologies Facilities Council of the United Kingdom; the Gordon and Betty Moore Foundation; the Heising-Simons Foundation; the French Alternative Energies and Atomic Energy Commission (CEA); the National Council of Science and Technology of Mexico; the Ministry of Economy of Spain; and DESI member institutions. The DESI scientists are honored to be permitted to conduct astronomical research on Iolkam Du’ag (Kitt Peak), a mountain with particular significance to the Tohono O'odham Nation.

Lawrence Berkeley National Laboratory addresses the world’s most urgent scientific challenges by advancing sustainable energy, protecting human health, creating new materials, and revealing the origin and fate of the Universe. Founded in 1931, Berkeley Lab’s scientific expertise has been recognized with 13 Nobel prizes. The University of California manages Berkeley Lab for the U.S. Department of Energy’s Office of Science.

DOE’s Office of Science is the single largest supporter of basic research in the physical sciences in the United States, and is working to address some of the most pressing challenges of our time.

Established in 2007 by Mark Heising and Elizabeth Simons, the Heising-Simons Foundation is dedicated to advancing sustainable solutions in the environment, supporting groundbreaking research in science, and enhancing the education of children.

The Gordon and Betty Moore Foundation, established in 2000, seeks to advance environmental conservation, patient care and scientific research. The Foundation’s Science Program aims to make a significant impact on the development of provocative, transformative scientific research, and increase knowledge in emerging fields.

The Science and Technology Facilities Council (STFC) of the United Kingdom coordinates research on some of the most significant challenges facing society, such as future energy needs, monitoring and understanding climate change, and global security. It offers grants and support in particle physics, astronomy and nuclear physics.