Newswise — ATLANTA —A new study found that patients with Down syndrome arthropathy continue to have an approximate year-long delay in diagnosis from the onset of their symptoms, and that optimal therapy for this condition remains unclear (Abstract # 2722). Details of this research will be presented at the 2019 ACR/ARP Annual Meeting in Atlanta.

Down syndrome arthropathy is under-recognized, with an average 19-month delay in diagnosis. The majority of patients present with polyarticular, rheumatoid factor and antinuclear antibody (ANA) negative disease. Current juvenile idiopathic arthritis (JIA) therapies appear to be poorly tolerated, more toxic and less effective in patients with the condition. This observational study’s objective was to characterize the clinical manifestations and therapeutic preferences in Down syndrome arthropathy using the Childhood Arthritis and Rheumatology Research Alliance (CARRA) registry. CARRA’s large multicenter observational registry began collecting data on children with JIA in the United States and Canada in July 2015. Down syndrome is documented in the CARRA registry as a coexisting condition.

“Down syndrome is one of the most common birth conditions in the United States and has a variety of associated complex medical challenges, such as increased incidence of oncologic and autoimmune conditions,” says Jordan T. Jones, DO, MS, a pediatric rheumatologist at Children’s Mercy Kansas City and assistant professor of pediatrics at the University of Missouri-Kansas City School of Medicine, and the study’s lead author. “Additionally, children with Down syndrome are at risk for delayed motor skills and functional limitation. Due to this, their symptoms can be overlooked or attributed to something other than arthritis. We hope to raise awareness and improve screening so there is a decrease in the delay in diagnosis. After diagnosis, we have to determine optimal therapy as these patients do experience more medication toxicity, intolerance and ineffectiveness compared to those with JIA.”

The researchers identified 36 patients with Down syndrome arthropathy in the total population of 7,337 JIA patients in the registry. Musculoskeletal symptoms began around seven years of age and there was an average delay of 11.5 months to arthritis diagnosis. At diagnosis, 64 percent of the patients had a polyarticular, RF-negative presentation, 39 percent reported morning stiffness with an average of four active and four limited joints, and 27 percent had elevated inflammatory markers.

Over half (64 percent) the patients began a disease-modifying antirheumatic drug (DMARD) at diagnosis, with 36 percent simultaneously starting a biologic therapy. Over the course of the disease, 78 percent used a DMARD, with all using methotrexate at some point, and 75 percent used a biologic, mostly etanercept. Of those patients exposed to DMARD therapy, more than half (54 percent) had at least one DMARD change, mostly due to methotrexate adverse effects. However, at the last recorded visit, 42 percent of patients were on methotrexate. Fifty-five percent of patients had at least one change in biologic therapy due to inadequate response. Between the first and last visit, significant improvements in active joint count and physical global disease activity were seen, but there was still a substantial disease burden noted.

About the ACR/ARP Annual Meeting

The ACR/ARP Annual Meeting is the premier meeting in rheumatology. With more than 450 sessions and thousands of abstracts, it offers a superior combination of basic science, clinical science, tech-med courses, career enhancement education and interactive discussions on improving patient care. For more information about the meeting, visit https://www.rheumatology.org/Annual-Meeting, or join the conversation on Twitter by following the official #ACR19 hashtag.

About the American College of Rheumatology

The American College of Rheumatology (ACR) is an international medical society representing over 8,500 rheumatologists and rheumatology health professionals with a mission to empower rheumatology professionals to excel in their specialty. In doing so, the ACR offers education, research, advocacy and practice management support to help its members continue their innovative work and provide quality patient care. Rheumatologists are experts in the diagnosis, management and treatment of more than 100 different types of arthritis and rheumatic diseases.

Background/Purpose: Down syndrome arthropathy (DA) is under-recognized with a 19-month average delay in diagnosis (1). The majority present with polyarticular, rheumatoid factor (RF) and anti-nuclear antibody (ANA) negative disease. The current therapies for juvenile idiopathic arthritis (JIA) appear to be poorly tolerated, more toxic and less effective in patients with DA (1). The objective of this study was to characterize clinical manifestations and therapeutic preferences in DA, using the new Childhood Arthritis and Rheumatology Research Alliance (CARRA) Registry.

Methods: The new CARRA Registry began prospectively collecting data on children with JIA in the United States and Canada in July 2015. Down syndrome (DS) is documented in the CARRA Registry as a coexisting condition. Within the new CARRA Registry, between the dates of July 2015 and March 2019, patients with JIA and DS were identified and an observational cohort analysis was performed. Collected data included demographics, disease characteristics, laboratory results, and treatment exposure.

Results: Thirty-six patients with DA were identified in the total population of 7337 JIA patients (0.005%) in the Registry with a mean follow-up period of 4.5 years (SD 3.2). The mean age at onset of musculoskeletal symptoms was 7.1 years (SD 3.9) and the mean months to JIA diagnosis was 11.5 months (SD 21.6). At diagnosis, 64% had a polyarticular RF negative presentation, 39% reported morning stiffness with an average of 4 active (SD 7; range 0 - 27) and 4 limited joints (SD 6; range 0-23), and a mean physician global of disease activity of 2.7 (SD 2.6; range 0 - 9). At diagnosis, 22% had elevated inflammatory markers (CRP, ESR), while 33% and 17% were positive for ANA and HLA-B27, respectively. Over half the patients (64%) were started on a disease modifying antirheumatic drug (DMARD) at diagnosis with 36% simultaneously starting a biologic. Over the course of disease, 78% used a DMARD (100% used methotrexate [MTX] at some point) and 75% used a biologic (mostly etanercept [70%]). Of those exposed to DMARD therapy, fifteen patients (54%) had at least one change of their DMARD (most due to MTX adverse effect [46%]), however, at the last recorded visit, 42% were on methotrexate. Fifteen patients (55%) had at least one change in biologic therapy due to inadequate response to therapy (Table 1). Between the first and last visit significant (p < 0.05) improvements were seen for active joint count and physician global of disease activity (Table 2).

Conclusions: In a large multicenter observational registry of JIA patients in North America, patients with Down syndrome arthropathy continue to have an approximate year-long delay in diagnosis from symptom onset. Treatments included corticosteroids (oral and intra-articular), DMARDs and biologic therapies throughout the course of the disease. Although there was a statistically significant improvement in active joint count and physician global assessment, there was no significant difference in limited joints, CHAQ, or patient global assessment with treatment. Optimal therapy remains unclear and current barriers are DMARD intolerance and anti-TNF effectiveness. More research is needed to determine optimal therapeutic approach. 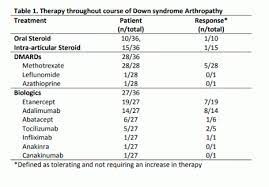