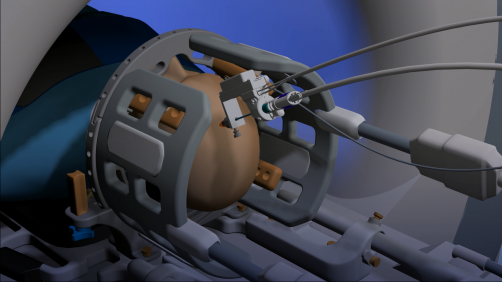 Surgeons using the NeuroBlate System were able to perform minimally-invasive brain surgery on a range of tumor locations including many that were deemed inoperable, according to a presentation at 2017 American Association of Neurological Surgeons (AANS) Annual Scientific Meeting.

Dr. Sloan, who is also Professor and Vice Chair of the Department of Neurosurgery at Case Western Reserve University School of Medicine, presented on Monteris Medical’s LAISE study results. He delivered an oral presentation titled “Laser Ablation in Stereotactic Neurosurgery (LAISE): A Multi-Institutional Retrospective Analysis of LITT for Glioma” which described the results of 97 patients whose lesions were ablated with the NeuroBlate system.

Also presented by Dr. Sloan and his co-investigators was a poster – recognized among 1,000 submissions with the Third Place Tumor e-Poster Award – titled “Laser Ablation in Stereotactic Neurosurgery (LAISE): A Multi-Institutional Retrospective Analysis of LITT for Brain Metastasis” describing results of 40 patients.

These two presentations represent results from patients who had brain lesions ablated from 2011–2015 at nine US centers.

“LITT is a minimally invasive tool used to ablate soft tissue and lesions in the brain that have historically been challenging to access,” said Dr. Sloan. “These encouraging findings from the LAISE study offer preliminary evidence that NeuroBlate may be a viable solution in individuals whose tumors were previously considered inoperable.”