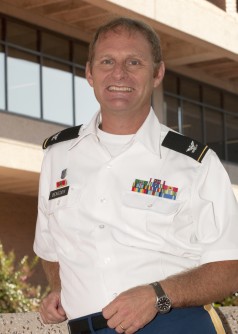 Army Col. (Dr.) David Benedek will be the new chair of the Department of Psychiatry at the Uniformed Services University of the Health Sciences' F. Edward Hebert School of Medicine.

Newswise — Bethesda, Md (March 1, 2017) – Army Colonel (Dr.) David M. Benedek will succeed Dr. Robert J. Ursano, M.D., as chair of the Department of Psychiatry at the Uniformed Services University of the Health Sciences’ (USU) F. Edward Hebert School of Medicine – ‘America’s Medical School’. Ursano announced last year that he would be stepping down as chair after 24 years, but will remain with the department as the director of USU’s Center for the Study of Traumatic Stress.

“In the parlance of academic medicine, Dr. Benedek is not only a ‘triple threat’ - he's a ‘quadruple threat.’ In addition to being an outstanding clinician, researcher and educator, he is a high performing military medical officer, with a past record of deployments to hot spots around the world in support of our armed forces. He'll be a wonderful leader and role model at USU," said Kellermann.

Benedek received his B.A. from the University of Virginia in 1986 and his M.D. from the Uniformed Services University School of Medicine in 1991. After Internship and Residency in Psychiatry at Walter Reed Army Medical Center, he served as Division Psychiatrist, First Armor Division (Germany) and deployed to the former Yugoslavia in support of U.S. and NATO Troops in Operation Joint Endeavor. He returned to Walter Reed to complete forensic psychiatry fellowship training in 1998 and served as Assistant Chief, Inpatient Psychiatry. He subsequently served as Training Director, National Capital Consortium Military Forensic Psychiatry Fellowship, and remained in that position until he joined USU’s fulltime faculty from 2004-2015. Benedek is presently Director of the Walter Reed National Military Medical Center’s Center for Forensic Behavioral Sciences (CFBS)—a highly acclaimed organization operating worldwide at the interface between behavioral science and the legal, intelligence and justice communities. The CFBS supports the only accredited forensic psychiatry and forensic psychology fellowship training programs in the DoD.

Benedek has authored or co-authored more than 100 scientific publications in prestigious journals including Lancet, Molecular Psychiatry, Translational Psychiatry, JAMA Psychiatry, the American Journal of Psychiatry, and many others. He has presented on numerous aspects of PTSD and military, disaster, and forensic psychiatry at regional, national, and international professional and scientific conferences. He served as a consultant to the American Psychiatric Association’s Practice Guideline for the treatment of Acute Stress Disorder and Posttraumatic Stress Disorder work-group in the development of its 2004 practice guideline, as lead author on the 2009 PTSD guideline update and on the American Psychiatric Association’s Committee on Confidentiality and Scientific Program Committee. His translational educational skills are evident in the highly acclaimed books he has edited, including the Clinical Manual for Management of PTSD –a leading text on an illness of critical concern to the military and the nation.

Benedek has received more than $10 million dollars in research funding for studies of translational neuroscience, disaster response, psychotherapeutic and pharmacologic treatments for Posttraumatic Stress Disorder and disaster resilience and preparedness programs. He directed the National Capital Area Integrated Clinical Study Site, one of ten clinical sites in the INTRuST Clinical Consortium for Psychological Health and Traumatic Brain Injury, funded by the Congressionally Directed Medical Research Program. He was the USU site principal investigator for the Army Study to Assess Risk and Resilience in Service Members (Army STARRS) component study ‘Soldier Health Outcomes Study-B (SHOS-B).’ He has extensive collaborations with the Veterans Administration (VA) and was one of a handful of leaders involved in the establishment of the VA National PTSD Brain Bank, where he serves on its executive committee and leads the Assessment Core.

In addition to past operational experiences in Bosnia and Croatia, Benedek deployed to Cuba, Iraq and Kuwait in conjunction with Mental Health Advisory Teams and other advisory task forces. He served as Consultant to the U.S. Army Surgeon General for Forensic Psychiatry from 2004–2008. His military service awards include Defense Superior Service Medal, the Meritorious Service Medal and the Army Commendation (3OLC). In 2002 he received the U.S. Army Surgeon General’s “A” Proficiency Designator (a rare honor for a Major), and was inducted into the Order of Military Medical Merit. He has served multiple terms as President of the Society of Uniformed Service Psychiatrists — the Military District Branch of the American Psychiatric Association, and is a Distinguished Fellow of the American Psychiatric Association. He has consulted to the highest levels of government leadership on matters relating to the psychological consequences of disaster, war and terrorism.

Benedek has received several national teaching awards, including the American Psychiatric Association’s Nancy C.A. Roeske award for excellence in medical education, and in 2015, a USU Impact Award for Outstanding Contribution to Psychiatric Education. In addition, he has received the National Capital Consortium’s LTG Claire Chennault Award for Outstanding Military Psychiatry Faculty Member. During his prior service on USU’s faculty, he directed the human behavior course, the third-year psychiatry clerkship, a fourth-year psychiatry elective, and played an important role in designing the School of Medicine’s current neuroscience and behavior module. "I feel deeply honored to have been selected as the next chair of Psychiatry at USU. I am mindful of the tremendous example Bob Ursano has set for many years in leading the Department to its well-deserved reputation for excellence,” said Benedek. “I am very grateful for his efforts in preparing me to accept the challenges ahead, and am also grateful to Dean, the selection committee and others who have expressed their confidence in my ability to do so."

About the Uniformed Services University of the Health SciencesThe Uniformed Services University of the Health Sciences, founded by an act of Congress in 1972, is the nation’s federal health sciences university and the academic heart of the Military Health System. USU students are primarily active duty uniformed officers in the Army, Navy, Air Force and Public Health Service who receive specialized education in tropical and infectious diseases, TBI and PTSD, disaster response and humanitarian assistance, global health, and acute trauma care. A large percentage of the university’s more than 5,500 physician and 1,000 advanced practice nursing alumni are supporting operations around the world, offering their leadership and expertise. USU also has graduate programs in biomedical sciences and public health committed to excellence in research, and in oral biology. The University’s research program covers a wide range of clinical and other topics important to both the military and public health. For more information about USU and its programs, visit www.usuhs.edu.