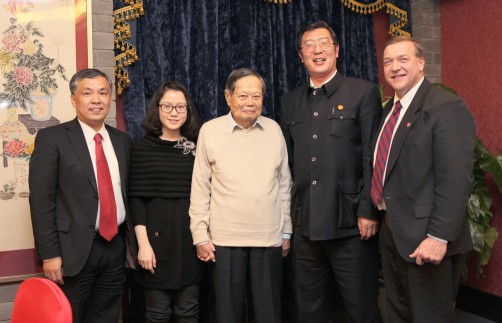 Newswise — STONY BROOK, NY, May 17, 2013 – Stony Brook University received a $1 million donation from Dr. Deng Wei to establish the Yang Chen Ning – Deng Wei Endowed Chair in Physics and Astronomy. The gift was announced at a formal donation ceremony that took place in Beijing, China on May 17 attended by Nobel Laureate Dr. C.N. Yang, Dr. Deng, founder and chairman of Bright Oceans Corporation based in Beijing, Dr. Hong Chen (’91), founder of the Hina Group, and Dr. Samuel L. Stanley Jr., President of Stony Brook University. Introduced to President Stanley in Beijing in March, Dr. Deng made the gift to honor Dr. C.N. Yang, who, in the years after he received the Nobel Prize for Physics in 1957, joined the Stony Brook University faculty in 1966 as its Einstein Professor, and was founding Director of Stony Brook’s Institute for Theoretical Physics, now known as the C.N. Yang Institute for Theoretical Physics. Dr. Yang participated actively in the University’s formative years, and the Yang Institute now encompasses the full range of theoretical physics, including elementary particles, string theory, statistical mechanics, and quantum information. Its former students and postdoctoral scholars hold leadership positions in science and education in the United States and around the world. “I was inspired to help establish this endowed chair with Stony Brook University in New York as a tribute to an institution that was for many years the home institution of C.N. Yang and a hope to further enhance the Sino-US cooperation,” said Dr. Deng Wei. “It is apparent to me that the work that continues to thrive at Stony Brook is extremely worthwhile, and merits this gift, which will honor Dr. Yang’s scientific legacy. I am sure that in the hands of Dr. Stanley and his colleagues, this donation will help Stony Brook promote the exchange of top-notch achievements in physics and astronomy around the world and foster their application and promotion in the areas of innovation, research and development, which will benefit bilateral collaboration regarding education and scientific research, therefore make new and greater contribution to the peaceful development of mankind.” The faculty and alumni of the Department of Physics and Astronomy and in the Yang Institute are continually being recognized for their leadership in the field. In the last year alone, Professor Leonardo Rastelli was awarded a Guggenheim Fellowship and a Simons Fellowship; Professor Rouven Essig was awarded a Sloan Research Fellowship; alumnus Anne Shilling was awarded a Simons Fellowship; alumnus Ashoke Sen received the inaugural Fundamental Physics Prize for pioneering work on string theory; and alumnus Shoucheng Zhang shared a 2013 Physics Frontiers Prize from the Milner Foundation. “On behalf of Stony Brook, I am profoundly grateful to Dr. Deng for his generosity to endow this faculty chair at Stony Brook. It will forever be a legacy and universally recognized as a tribute to Nobel Laureate, Dr. C.N. Yang,” said Samuel L. Stanley, Jr., MD, President of Stony Brook University. “This is an extraordinary milestone for Stony Brook; it will foster world class achievements in physics and astronomy and will be celebrated for generations. It is a catalyst for new research and innovation which will benefit Stony Brook, China and the world.” ### About the Department of Physics and Astronomy at Stony Brook UniversityThe Department of Physics and Astronomy at Stony Brook University offers a diverse program and consistently ranks amongst the best and largest in the country. In its latest departmental rankings (2010), US News and World Report listed the department as 23rd in the nation out of 145 programs in the United States; with the Nuclear Physics program ranked 4th. The 2010 NRC ranking, which is the most prestigious ranking in the US, ranks the Graduate School among the top 15 programs in the country. The department shares faculty with the CN Yang Institute for Theoretical Physics, a leading center for high energy physics, string theory and statistical mechanics; the Simons Center for Geometry and Physics, a research center devoted to furthering fundamental knowledge in geometry and theoretical physics, especially knowledge at the interface of these two disciplines; and the Laufer Center for Physical and Quantitative Biology, with an aim to advance biology and medicine through discoveries in physics, mathematics and computational science. Current and past faculty members have received numerous top honors in the field, including the Nobel Prize, National Medal of Science, Niels Bohr Institute Prize, Dirac Prize, CAREER Awards, Humboldt Awards, PECASE Awards, Asahi Prize, Dannie Heineman Prize for Mathematical Physics, Guggenheim, Sloan, AAAS, IEEE, American Physical Society and Royal Danish Academy Fellowships, and more.