Dr. Gordon Weir, Co-Head of Section on Islet Cell and Regenerative Biology at Joslin, to Receive the Albert Renold Award for his Significant Impact as a Mentor from the American Diabetes Association 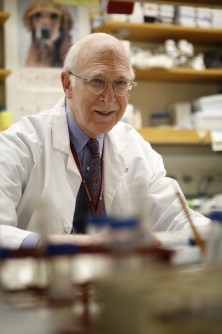 Newswise — BOSTON – (April 26, 2016) – Gordon Weir, M.D., Diabetes Research and Wellness Foundation Chair, Co-Head of Section on Islet Cell and Regenerative Biology at Joslin Diabetes Center and Professor of Medicine at Harvard Medical School, has been selected as the recipient of the American Diabetes Association’s (ADA) 2016 Albert Renold Award. Dr. Weir will be presented with the award at the ADA’s 76th Scientific Sessions in New Orleans, Louisiana.

One of the ADA’s highest scientific awards, the Albert Renold Award is given annually to an individual who has made a significant impact as a mentor to diabetes researchers or to a community of diabetes investigators. This award was named for Albert Renold, M.D., who served as the Director of The Baker Clinic Research Laboratory, which later became the Elliott P. Joslin Research Laboratory, at Joslin from 1959 until 1962.

“I was delighted to receive news about the award. It was my good fortune to know Albert very well; he was an extraordinary inspiration, devoted to advancing excellent research focused on helping people with diabetes,” said Dr. Weir.

“It is inspiring to work in an institution with a mission that is so simple and powerful, to do whatever is possible to help people with diabetes through care and research. A particularly gratifying aspect of being in research is having the privilege to mentor outstanding young scientists not only in my laboratory, but also through many international programs and meetings where I've had the opportunity to help a number of other young investigators,” he added.

In his various roles at Joslin, including serving as the Co-Head of Joslin’s Section on Islet Biology and Regenerative Medicine and as the Chair of the Diabetes Research and Wellness Foundation, Dr. Weir has pushed the boundaries of what we know scientifically about the function of the pancreas and beta cells. In his research on pancreatic islets, which contain insulin-secreting beta cells, Dr. Weir’s main research goal is to find ways to preserve and replenish the insulin-producing pancreatic beta cells that are deficient in both types 1 and 2 diabetes.

In addition, Dr. Weir works with Susan Bonner-Weir, Ph.D., Senior Investigator in the Section on Islet Transplantation and Cell Biology at Joslin Diabetes Center and Professor of Medicine at Harvard Medical School, to discover ways to improve beta cell transplantation by finding new sources of beta cells. He is also collaborating with Dr. Dan Anderson and Dr. Robert Langer at MIT to develop materials that can encapsulate beta cells, which could thus release insulin and not induce inflammatory immune responses from the host.

Dr. Weir received his medical degree from Harvard Medical School in 1967. Before coming to Joslin, Dr. Weir was a Professor of Medicine at the Medical College of Virginia. He has been at Joslin since 1984. In addition to conducting a broad research program, Dr. Weir served as Joslin’s Medical Director for nine years.

Until recently Dr. Weir served as Director of Joslin’s Diabetes Research Center (DRC), one of only 11 National Institutes of Health-designated DRCs in the country, and as Head of the Diabetes Program of the Harvard Stem Cell Institute. He is currently the director of Joslin’s cell-based therapy initiative.

Dr. Weir is the recipient of numerous honors and serves or has served on the editorial boards of several prestigious journals, including the American Journal of Physiology, Journal of Clinical Endocrinology and Metabolism, Endocrinology and Transplantation. He served as Editor-in-Chief of the journal Diabetes. He currently serves as chairman of the JDRF Encapsulation Consortium.

“Dr. Weir has made many important scientific discoveries that have deepened our understanding of the function of the pancreas and beta cells. These advances in our knowledge have proven crucial as we continue to search for a cure for diabetes,” said Peter S. Amenta, M.D., Ph.D., President and CEO of Joslin Diabetes Center. “This award not only recognizes Dr. Weir’s research accomplishments, but also his dedication to mentoring the next generation of diabetes researchers.”