Dr. Jonathan Slaght to Be Honored for Work to Conserve Blakiston’s Fish Owl

• WCS researcher will be inducted into World Owl Hall of Fame 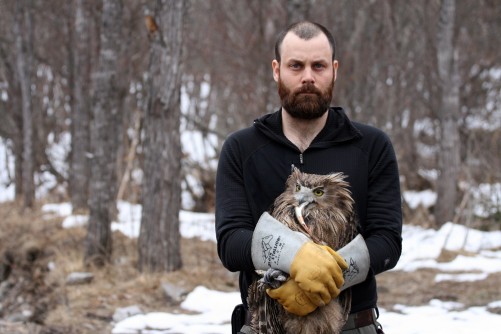 Newswise — NEW YORK (February 8, 2017): The WCS (Wildlife Conservation Society) announced today that Dr. Jonathan Slaght will be honored for his work in Russia to conserve the Blakiston’s fish owl, an endangered species and the largest owl in the world.

Slaght, who has studied these enigmatic salmon-eaters since 2005, is set to receive a Special Achievement Award at the International Festival of Owls in Houston, Minnesota on Saturday, March 4, 2017. Dr. Slaght received his PhD at the University of Minnesota studying habitat use by the Blakiston’s fish owl and, working with partners from the Russian Academy of Sciences, is utilizing these findings to enact a conservation plan for the species. In addition to pro-active, tangible conservation efforts, Slaght has also raised public awareness of Blakiston’s fish owls via articles in his Scientific American blog, The New York Times, and interviews with the BBC, the Guardian, Mongabay, and Audubon magazine, among others.

Slaght is one of only a few scientists studying this species in Russia and is one of three owl researchers to be inducted into the World Owl Hall of Fame this year—other inductees are Dr. Rocky Gutierrez (for his work with Spotted owls in California), and Sumio Yamamoto (for his work with Blakiston’s fish owls in Japan).

Slaght’s research and conservation efforts have been funded by the United States Forest Service, the Columbus Zoo and Aquarium, Keidanren Nature Conservation Fund, the Minnesota Zoo’s Ulysses S. Seal Conservation Fund, and the International Owl Society. The World Owl Hall of Fame is sponsored by the International Owl Center, the Global Owl Project, and Bob Kierlin together with Mary Burrichter. More information is available at http://www.festivalofowls.com/halloffame.html.

High resolution images of the award winners are available to download and use athttp://www.festivalofowls.com/photos/9-uncategorised/133-high-resolution-photo-gallery.html