DR. ROBERT GALLO Available for Interviews: April 23rd Marks 30 Years Since Announcing HIV as the Cause of AIDS 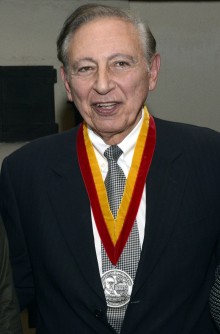 Interview Opportunity:DR. ROBERT C. GALLO – April 23rd Marks the 30-Year Anniversary since Announcing HIV as the Cause of AIDS Who: Dr. Robert C. Gallo, Director and Professor, Institute of Human Virology, University of Maryland School of Medicine and Scientific Director, Global Virus Network Dr. Gallo is most widely known for leading the discovery of HIV, a retrovirus which causes AIDS, and the development of the HIV blood test as well as the discovery of the first and second known human retroviruses (HTLV-1 and HTLV-2) What: April 23 marks 30 years since US HHS Secretary Margaret Heckler announced that Dr. Robert Gallo and his colleagues had discovered the cause of AIDS – later called HIV, and developed the HIV blood test. This discovery led to the most medical breakthroughs in modern history in the shortest amount of time – including the development of viral drug therapy for the first time. Today, Dr. Gallo directs the Institute of Human Virology (IHV) at the University of Maryland School of Medicine, which treats more than 500,000 HIV positive individuals in 7 African and 2 Caribbean nations in addition to more than 5,000 HIV positive Baltimoreans. IHV is internationally renowned for its basic science research, which includes the launch of clinical trials this year on a promising preventive HIV vaccine candidate funded largely by the Bill & Melinda Gates Foundation. Dr. Gallo also supports research for a “functional” cure. In 2011, Dr. Gallo co-founded the Global Virus Network to bridge an information gap he experienced in the early days of the AIDS epidemic, in addition to training the next generation of medical virologists. When:Please contact Nora Grannell at [email protected] or 410-706-1954 to arrange an interview with Dr. Gallo.