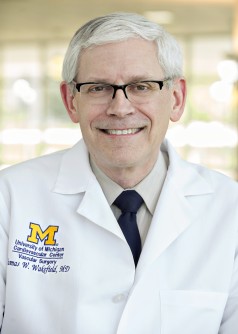 Newswise — ANN ARBOR, Mich. -- Thomas Wakefield, M.D., has been appointed a director of the University of Michigan Frankel Cardiovascular Center, as James C. Stanley, M.D., resumes his role as professor of vascular surgery and associate chair of the U-M Department of Surgery.

Wakefield, head of vascular surgery at the U-M, begins his four-year appointment July 1.

Wakefield is a graduate of the Medical College of Ohio (University of Toledo Medical Center). A surgeon-scientist, he works with teams at the Conrad Jobst Vascular Research Laboratory to develop new approaches to prevent and treat deadly blood clots.

Wakefield has led vascular surgery at the University of Michigan since 2004 and is past president of the American Venous Forum and the Michigan Vascular Society.

Stanley was one of the four directors of the Cardiovascular Center who initiated a collaborative and integrated care model to pursue the latest innovations in cardiovascular care.

For more than 40 years, Stanley has been a leader in vascular surgery, helping to define the specialty and provide outstanding training and education to future surgeons.

While serving as director, Stanley continued to treat occlusive and aneurysmal diseases of the blood vessels. He is internationally known for his management of pediatric aortic and visceral artery disease.

“The University of Michigan provides the best that science and technology has to offer and applies it with careful compassionate care,” says Stanley, who also serves as the Marion and David Handleman Research Professor of Vascular Surgery. “It happens here because of the spectrum of talent among the faculty and students.”