27-Aug-2020 11:05 AM EDT, by American Association of Neuromuscular and Electrodiagnostic Medicine (AANEM)
favorite_border 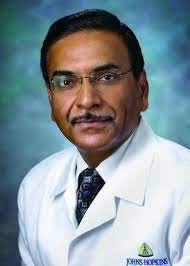 Newswise — The American Association of Neuromuscular and Electrodiagnostic Medicine (AANEM) is honoring Vinay Chaudhry, MD, with the 2020 AANEM Distinguished Researcher Award for his many years of dedicated research and outstanding clinical care of patients with neuromuscular (NM) diseases.

Dr. Chaudhry has made significant contributions to research throughout his career.  He has received more than 40 research grants, and is currently participating in 15 ongoing NM clinical trials. He has also been an author on over 80 peer-reviewed publications, over 20 book chapters, as well as more than 75 published abstracts. He has been in the forefront of defining clinical, electrophysiological, and IVIG responsiveness of multifocal motor neuropathy (MMN), a disease close to his heart. He has published extensively on chemotherapy-induced polyneuropathies (CIPN) from taxol, vincristine, suramin, thalidomide, and bortezomib.  These papers have emphasized the dose-dependent nature of neuropathy and patterns of length-dependent distal symmetric neuropathy versus the nonlength dependent neuropathy.

"I continue to be involved in trials of myasthenia gravis, amyotrophic lateral sclerosis (ALS), and amyloid neuropathy. Electrophysiology remains the cornerstone of all my research and I have worked on several projects including motor unit estimates, motor unit number index, neuronal excitability studies, and electrophysiological methodological studies in ALS," Dr. Chaudhry said.

Dr. Chaudhry has been active in the AANEM for many years.  He served as chair for both the AANEM CME Advisory Committee and the Journal Committee. He was a member of the Neuromuscular Vision Task Force, Membership & Ethics committee, and has served on the Muscle & Nerve Editorial Board.  Dr. Chaudhry was also actively involved with ABEM,  serving as an examiner for the ABEM certification exams in 2002, 2003, and 2007- 2013 and  as the ABEM Secretary.  AANEM is important to Dr. Chaudhry.

“AANEM is a special organization of the physicians, by the physicians, and for the physicians practicing neuromuscular and electrodiagnostic medicine,” said Dr. Chaudhry. “AANEM meetings make me feel completely at home, providing the perfect opportunity to lean on, teach and interact with colleagues practicing in your field."

Dr. Chaudhry is currently a Professor of Neurology at John Hopkins University School of Medicine and Director of Neurology EMG Laboratory at the John Hopkins Hospital.  At Johns Hopkins, he has also served as the Vice Chair of Clinical Affairs and Director of the Neurology Outpatient Center (2002-2013), and Director of Clinical Neurophysiology/Neuromuscular Fellowships (1996-2005), and Director of Neuromuscular Division (2001-2004). Dr. Chaudhry has been a member of AANEM since 1989 and has presented at over 20 sessions and symposiums at AANEM Annual Meetings since 1997. Dr. Chaudhry received his medical degree from the All-India Institute of Medical Services in New Delhi, India. He became house officer in internal medicine at Preston Hospital & Tynemouth Victoria Jubilee Infirmary in North Shields, England and senior house officer in internal medicine at Llanelli Hospital in Wales, United Kingdom. He obtained membership in the Royal College of Physicians (M.R.C.P.), equivalent to board certification in internal medicine. He went on to complete a residency in neurology at the University of Tennessee Center for Health Sciences and the University of Alabama in Birmingham. He was the chief resident during his last year of training. He then trained at Johns Hopkins, receiving subspecialty training in clinical and research aspects of neuromuscular diseases.  Dr. Chaudhry has also been active with the American Academy of Neurology (AAN) serving on the board of directors from 2007 to 2011 and the chair of NM section of AAN (2001-2005). It was under his leadership that the Accreditation Council for Graduate Medical Education (ACGME) subspecialty NM examination was created.

About the American Association of Neuromuscular & Electrodiagnostic Medicine (AANEM)

Based in Rochester, Minnesota, the American Association of Neuromuscular & Electrodiagnostic Medicine (AANEM) is the premier nonprofit membership association dedicated to the advancement of neuromuscular (NM), musculoskeletal and electrodiagnostic (EDX) medicine. The organization and its members work to improve the quality of patient care and advance the science of NM diseases and EDX medicine by serving physicians and allied health professionals who care for those with muscle and nerve disorders.