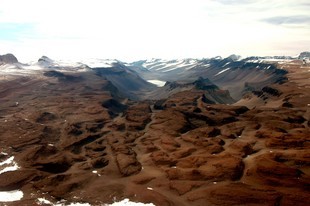 Six hundred meters wide and 250 deep, the Labyrinth is a maze of canyons in Antarctica's southern Victoria Land. Its origin has remained a mystery for years.

Newswise — Suzanne Baldwin, Syracuse University earth sciences professor and director of the Syracuse University Noble Gas Isotope Research Laboratory, has an urgent message: The Earth is running a temperature, and we need to do something about it. She and colleagues at Boston University have found evidence for a warming climate change that occurred more than 14 million years ago. As a result of this warming trend, catastrophic drainage of subglacial lakes caused flooding that formed a 50-kilometer maze of canyons (called the Labyrinth) in Antarctica's southern Victoria Land.

While the discovery answers one long-unsolved mystery regarding the landscape evolution of the western Dry Valleys of Antarctica, Baldwin points out that it has even greater implications for global climate change models today. Drainage of subglacial lakes on the continent released the enormous, forceful volume of water that flooded the Labyrinth area millions of years ago. Could this happen again? Many subglacial lakes currently exist under the East Antarctic ice sheet. One such lake, Lake Vostok, is similar in size to Lake Ontario. Baldwin and her colleagues believe that global climate change models need to investigate the potential impact that a similar catastrophic release of water from subglacial lakes might have on present-day global warming.

Such a catastrophic release of fresh water from these subglacial lakes would impact the stability of the East Antarctic ice sheet, affect the Southern Ocean circulation, and alter the delicate balance of the Earth's ecosystems.

Until recently, the origin of the Labyrinth has puzzled geologists. Baldwin and Laura Webb, SU assistant research professor of earth sciences, determined the timing of the last subglacial flood by dating volcanic ash preserved on bedrock surfaces. Together with their colleagues David R. Marchant and Adam R. Lewis of the Department of Earth Sciences at Boston University, they have solved the mystery of how the Labyrinth formed. The team determined that massive floods carved the channels between 12 and 14 million years ago.

According to their research, water from under the East Antarctic ice sheet was released catastrophically and carved the bedrock channels that measure as wide as 600 meters and as deep as 250 meters. The volume of water required to carve the channels was far more than that produced from meltwater at the base of the ice sheet alone. They propose that catastrophic drainage of subglacial lakes from East Antarctica or the inland flanks of the Transantarctic Mountains is the most likely source of the water. The volume of fresh water drained into the Southern Ocean may have disrupted ocean circulation and contributed to regional and global climatic changes. Their research, funded by U.S. National Science Foundation grants, was published in the July issue of the journal Geology.

"There is no doubt that global climate change has occurred throughout Earth's history," says Baldwin. "But the current warming trend that we are experiencing is human-induced. We need to act now to reduce greenhouse gas emissions. Global leadership is desperately needed to attack the problem of global warming."

Adds Baldwin: "There are plenty of steps we can take to reduce greenhouse gas emissions. The public needs to take the opportunity to educate itself concerning what can be done to reduce them. Seeing the movie 'An Inconvenient Truth' will give people a better appreciation of the potential problems we will face if we simply decide to do nothing and if the current attitude of 'business as usual' prevails."

As illustrated in the Al Gore documentary "An Inconvenient Truth," glacial melting has been linked to the doubling of category 4 and 5 hurricanes in the last 30 years, the movement of malaria to higher elevations, such as the Colombian Andes, and the migration of hundreds of plant and animal species to regions closer to the poles. Climate experts in the film predict that if left unchecked, the warming could cause glacial meltwater to raise global sea levels by more than 20 feet in the next 50 years, devastating many of the world's densely populated coastal areas.

For more information on the labyrinth research, visit http://geology.geoscienceworld.org/cgi/content/abstract/34/7/513.

For more information on "An Inconvenient Truth," visit http://www.climatecrisis.net.