Drexel U. Experts Available to Comment on the 2014 Sochi Winter Olympics 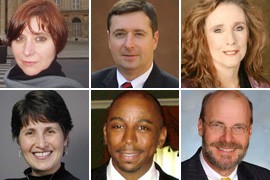 Drexel U. experts are available to comment on a variety of topics related to the 2014 Winter Olympic Games

Newswise — With the opening of the 2014 Sochi Winter Olympic Games approaching on Feb. 7, Drexel University experts are available to assist the news media with coverage of the following topics:

Homeland Security, Terrorism and Counter-Terrorism: Scott White, PhD, is a professor of homeland security and security management in Drexel’s College of Computing & Informatics. He previously taught a course in emergency management called “Olympic Terror: Munich-London” regarding the 2012 London Olympic Games. He is a criminologist with an accomplished career in security. Before his academic career, he served as the director of the Institute of Homeland Security at Westfield State University. He was a commissioned officer with the Canadian Forces Military Intelligence Branch (Department of National Defence) and worked for the Canadian Security Intelligence Service.

Human Rights, including Gay Rights:William L. Rosenberg, PhD, a professor of political science at Drexel University, can discuss the controversy over Russia’s stance on gay rights. He can draw comparisons between these human rights abuses and those of the 1936 Berlin Olympics, during which Jews were not allowed to compete for Germany. Rosenberg is a well-known expert in the presidential election process as well as public opinion and media related to the campaigns. Rosenberg is a co-author of two books related to public opinion and public policy, “News Verdicts, the Debates and Presidential Campaigns” and “The Politics of Disenchantment: Bush, Clinton, Perot and the Press.”

Amateur Athletes' Rights: Ellen Staurowsky, EdD, a professor of sport management in Drexel’s Center for Hospitality and Sport Management, is an expert in the areas of social justice issues in sport, gender equity in sport, Title IX pay equity and equal employment opportunity, athlete exploitation, college sport reform, and misappropriation of American Indian imagery in sport. She founded a research and activism network, “LGBT Issues in Sport: Theory to Practice,” which aims to be the definitive resource for research on LGBT issues in sport. Staurowsky is co-author of the book, “College Athletes for Hire: The Evolution and Legacy of the NCAA Amateur Myth.”

Olympic History and Sports Psychology:Eric Zillmer, PhD, neuropsychologist and director of athletics, can comment on a wide range of topics, including the history of the Olympics – both ancient and modern – as well as issues of gender, fan behavior, social context of sport, doping and performance enhancement. He has written extensively in the areas of sports psychology, neuropsychology and psychological assessment, having published more than 100 journal articles, chapters and books; and frequently contributes to local and national media on topics ranging from sports and forensic psychology to the psychology of terrorism.

Olympic Fashion:Alphonso McClendon is a professor of fashion design in Drexel’s Antoinette Westphal College of Media Arts & Design, who previously worked for Nautica for over a decade. He was the driving force behind the success of Nautica men’s swimwear; his swimwear designs have appeared in Men’s Vogue, Details and GQ, and were featured on NBC’s “The Today Show” and HBO’s “The Sopranos.” McClendon can discuss the controversy over the conundrum created by the U.S. State Department’s warning that athletes should avoid wearing Olympic uniforms outside of designated venues.

Media Coverage of the Olympics:Karen Curry was the London bureau chief for NBC News and, among other things, oversaw the bureau’s coverage of the death of Princess Diana. She later served as the former vice president and New York bureau chief for CNN. She currently serves as executive director of the Kal & Lucille Rudman Institute for Entertainment Industry Studies at Drexel University.

Sports Injuries and Rehabilitation:Robert Maschi, DPT, is an assistant clinical professor in Drexel’s department of Physical Therapy and Rehabilitation Sciences and a board-certified specialist in orthopedics by the American Physical Therapy Association. In practice, he has rehabilitated winter sports athletes including skiers, snowboarders, skaters and hockey players to help them return from injury back to sport. His research focus includes running biomechanics and their relationship to overuse injury.

Members of the news media who are interested in speaking with these experts can contact Alex McKechnie at 215-895-2705 or [email protected].