Drilling Down for a Win

Newswise — It’s UND kelly green, seven feet tall and it can bore through limestone like butter.

A robotic drill designed by UND Engineering students is one of just nine finalists in the international Drillbotics competition.

A dozen UND engineering students have been working since last fall on the Drillbotics project, and UND was selected for the second phase of the competition. That’s unusual because almost no universities advance to the second phase during their first year in the contest, said Vamegh Rasouli, petroleum engineering chair and one of the team advisors.

“No one has started from scratch like we have,” said Jeff Elliott, a mechanical engineering senior from Eagan, Minn. “Other schools have taken three years to get here. We started from ground zero.”

“To attain this measure of success in the first year of the UND Drillbotics program is an unprecedented achievement,” said Hesham El-Rewini, dean of the College of Engineering & Mines. “To be chosen as one of the nine teams worldwide to advance to the final competition phase is a testament to the quality of our students and the commitment of their advisors.  We are extremely proud of these young engineering students and wish them the very best.”

The Drillbotics competition goal is to design an automated robot that can drill through two feet of “mystery rock” when judges visit UND later this month.

Once on campus, competition judges will grade on drill speed, borehole straightness and quality. Teams also are scored on their ability to present and explain their work, including safety measures, budget and design choices. Judges are looking for creativity, innovation and reliability. The contest is managed by the Society of Petroleum Engineers. Winners will be announced this summer.

“I’ve gotten job interviews because of this project,’ said Ryan Silva, a mechanical engineering senior from Colorado Springs, Colo., who ended up with green hands for a few days after painting the robot. “This is real-world experience. It’s cross-disciplinary with mechanical, petroleum and electrical engineers. We need to understand what every student does and work as one engineer to solve problems.”

Silva said the team was both excited and overwhelmed when they were selected as finalists.

“We’re learning how the oil industry works,” Silva said. “This is real.”

“We did the design last semester,” said Cody Williamson, a petroleum engineering senior from Grand Forks who helped design the fluid system which cools the drill bit and flushes cuttings. “Now we’ve built the project and were selected for the final phase. This is big. Other universities have been doing it several years, and this is our first year.”

“We overcame a lot of challenges to construct the rig,” said Thomas Neison, an electrical engineering senior from Brooklyn Park, Minn.

Neison says the drill may penetrate limestone with ease, but granite is a challenge they’re still addressing. The team made concrete slabs and also uses rock samples provided by the Laird Core & Sample Library on campus.

“The drill rises up and down, we can control the speed, and we’re working on making it more automated,” Neison continued. He’s working to measure temperature and acceleration using electronic sensors.

“What sets us apart is that although we are required to have sensors that gather information, no one we know of is using the sensor data to control the drill and sense when the drill is having trouble,” Neison said. “We can use sensors to slow down or speed up the drill and make live adjustments.”

“No one could do this by themselves,” said Williamson. “But 12 people each do their part with the support of the college and the engineering disciplines.”

“This is a great example of successful collaboration between three departments at the College of Engineering & Mines,” said Meysam Haghshenas, assistant professor of mechanical engineering and one of the advisors. “The students have done everything, including programming, design, mechanics and manufacturing and material characterization. Students in the team have different backgrounds, share ideas and learn from each other. They are doing a great job.” 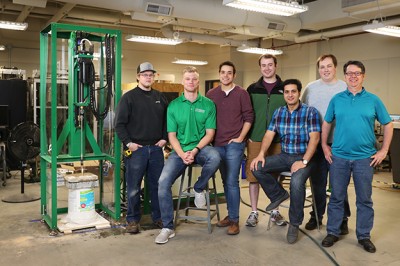 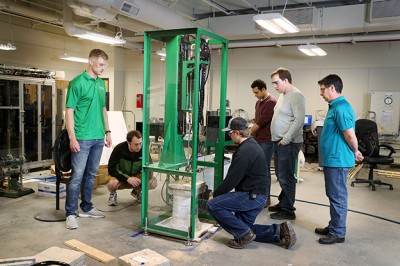