Drought in the Amazon Rain Forest

Patterns of deforestation may increase Amazon’s vulnerability to drought 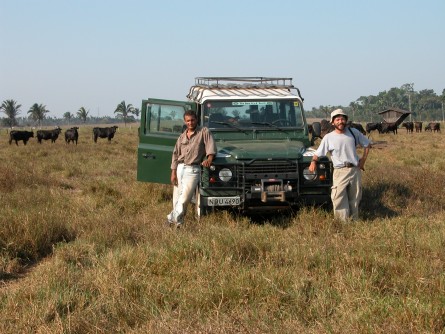 Research scientist Izaya Numata, right, of the Geographic Information Sciences Center of Excellence at South Dakota State University, and his Brazilian research assistant perform field research on pastures in Rondônia, Brazil, as part of Numata’s dissertation work. Over the next three years, he and a team of scientists will study how two droughts in five years have affected forest fragments, such as those in the background.

Newswise — Two major droughts within a five-year period have done significant damage to the Amazon forest in Brazil, but analyzing how the forest has responded may help researchers predict the long-term impact of global warming, according to research scientist Izaya Numata of the Geographic Information Science Center of Excellence at South Dakota State University.

Through a three-year, $602,349 NASA grant, Numata and a team of scientists will assess how the 2005 and 2010 droughts affected the forest edges and to what extent deforestation patterns affect the trees’ vulnerability. His team consists of senior scientist Mark Cochrane, a wildfire expert; assistant professor Jeppe Kjaersgaard, an agricultural engineer at the SDSU Water Resources Institute; and professor Sonaira S. da Silva of the Federal University of Acre in Brazil. One postdoctoral researcher will also work on the project.

The study will focus on the southern Brazilian Amazon including the states of Acre, Rondônia and Mato Grosso. These areas were affected by both droughts and are heavily deforested yet have scattered fragments of remaining forest. Slowing deforestationThe Brazilian Amazon covers 60 percent of the country, an area half the size of the continental United States, Numata explained. By 2013, deforestation that began in the 1970s had cleared an area equivalent to North Dakota, South Dakota, Minnesota and Iowa combined.

Farmers in the deforested areas raise cattle, but more recently have planted soybeans, Numata explained. To expand production, they simply cleared more forest area. In the last decade, the Brazilian government has been enforcing regulations that have helped slow deforestation, he added. Consequently, farmers “must now manage their land more sustainably.”

Analyzing fragmentation of forest“The prolonged drought in 2005 caused a lot of tree mortality,” Numata explained, adding the subsequent drought in 2010 was far more severe and extensive. Researchers at the California Institute of Technology found that the forest canopy had not yet recovered from the 2005 drought when the even stronger 2010 event occurred. This double-whammy may have lasting-effects on the forest, Numata added. However, the impact will likely be different based on the shape and size of the forest fragments, according to Numata. Trees near the edge of forest fragments are subjected to more solar radiation, lower humidity and stronger winds. This then causes thinning of the tree canopy, death of trees and plants and significant changes in the species the forest can support.

These edge effects vary based on distance from edge to interior forest and time since the creation of forest edge, Numata explained. Since the southern Amazon is intensively deforested and fragmented, Numata hypothesizes that these forest edges are more vulnerable to drought than trees in the interior forest. To verify this, he and his team will examine Landsat satellite data from 1997 through 2014 to document when forest fragments were created and how their size and age affect their reaction to drought.

After characterizing the forest fragments spatially, the team will visit specific sites across the gradient of intensity of both droughts and forest fragmentation in July to measure vegetation at regular intervals from the forest edge, according to Numata. Then the field results will be compared with spatial and temporal changes in forest biophysical conditions such as evapotranspiration, phenology and greenness derived from Landsat for those areas affected by the drought and those that were not.

Based upon the results, the scientists will try to predict the vulnerability and response of the forest to future changes in climate and land cover.

“The forest edges may serve as indicators of the tipping point at which future drought events and climate change can cause a lot of ecological changes to the Amazonian system,” Numata added.

About the Geographic Information Science Center of Excellence The Geographic Information Science Center of Excellence (GIS) is a joint collaboration between South Dakota State University (SDSU) and the United States Geological Survey's National Center for Earth Resources Observation and Sciences (EROS). The purpose of GIS is to enable South Dakota State University faculty and students, and EROS scientists to carry out collaborative research, seek professional development, and implement educational programs in the applications of geographic information science.