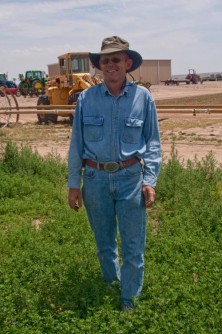 Robert Flynn, New Mexico State University agronomist, in 2009 when the NuMex Bill Melton alfalfa variety was released. This variety is drought-tolerant and was created by Ian Ray, NMSU professor of agronomy.

The Billy Melton variety, developed by Ray, NMSU professor of agronomy, was named in honor of Bill Melton, an NMSU professor who had an alfalfa-breeding program in the late 1970s and began developing varieties that had higher drought tolerance.

Ray and Flynn evaluated the NuMex Bill Melton variety under stress-inducing factors, such as using sufficient to limited water. Compared to other drought-tolerant varieties, such as the Wilson variety, it produced better yields and better quality.

Research proved that this variety performs under drought conditions as well as under regular irrigation practices using more water.

This alfalfa variety was released in June 2009 and was favorably reviewed by the National Alfalfa and Miscellaneous Legume Variety Review Board in January 2010.

“A lot of alfalfa varieties do well under normal irrigation practices, but once water is withheld, they don’t do so well,” said Flynn, agronomist at NMSU’s Agricultural Science Center at Artesia. “This variety offers the promise of production in a climate where production may not have been possible before.”

Contrary to popular belief, this variety was not genetically modified. It took almost 12 years to make, slowly being created and curated using traditional methods and was specifically designed to meet the needs of growers across New Mexico.

“It takes time to develop a variety like this,” Flynn said. “Sequences of genes in the plant influence yields even when there is lack of water. Ray took those genes and incorporated them into a new line that carries that marker and performs well.”

Ray used state-of-the-art technology to find the genetic codes that allow this alfalfa to persist under drought conditions and yield marketable alfalfa where others can’t.

“Since this cultivar yields well in wet and dry soil conditions, it should help farmers have more stable forage yields in wet years and dry years,” Ray said. “In dry years, however, regardless of the cultivar, yields will be less if insufficient moisture is provided to the crop.”

NuMex Bill Melton has been tested in different locations across New Mexico, taking into account different elevations and irrigation practices.

“This helps us see how it does in different climate conditions in different regions in the state, and this information is useful for all growers in New Mexico,” he said.

This year marks the culmination of their research and trials that have led to creating the optimal characteristics that make up the Billy Melton variety.

This variety could potentially impact other industries such as dairy and livestock, since it produces quality alfalfa with the protein necessary for the animals’ diet.

Flynn and Ray will continue to monitor the different trial plots around the state throughout the year to evaluate and compare the Billy Melton variety to other varieties until it becomes commercially available next year.

“We want to look for other characteristics that make this variety successful in our region,” Flynn said. “This variety holds great promise to grow and yield under limited conditions.”